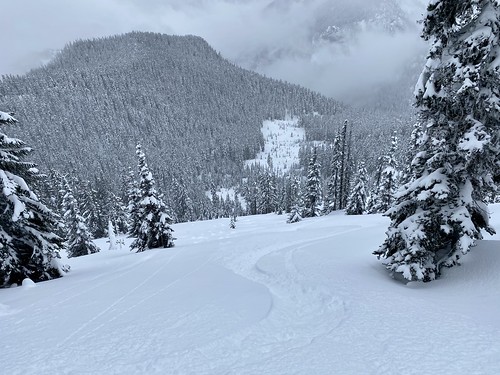 Length : 4 miles, roundtrip
Elevation Gain : 1800 ft.
Kendall Trees refers to the forested area rising up from the Commonwealth Creek along the eastern slopes of Kendall Peak and the minor ridge that extends westerly. It's often an area skied on the way out from other tours, such as skiing one of the many couloirs in the Kendall Adventure zone. However, given it's easy access and protected nature of the slopes within the lower trees, it's an area people flock to when there are avalanche or time concerns.

It's accessed by following the summer trail from Summit West which parallels Commonwealth Creek, and then breaking off and proceeding uphill once past the wide open area with exposed cliffs. There isn't a hard and fast rule on the exact area that is Kendall Trees, but it is generally considered to end once you leave the tree line on Kendall (even though there may be isolated stands of trees that run farther up Kendall).

Parking is available at the Summit West parking lot. As of the 2022/2023 season, you can park for free in lot W3, which is immediately on your right as you enter the Summit West Base Area. I would advise consulting with their website to determine where to park, as it may change in the future.

Type : ski tour
Length : 6.75 miles, roundtrip
Elevation Gain : 3,120 ft.
High Point : 5,423 ft.
Download GPX View Track Only
It was one of those borderline ski days - I hadn’t been on a ski tour for awhile, there was some, but not a lot of new snow and I only had part of the day to get away. Given how the season had been lining up with my schedule, I knew I would regret not getting out. So I set the alarm and made my way up to the mountain.
There were a few cars in the Summit West parking lot, and more started to roll in as I put on my gear. I made my way under I-90 and saw newly minted skin tracks in the couple inches of fresh snow on the ground. 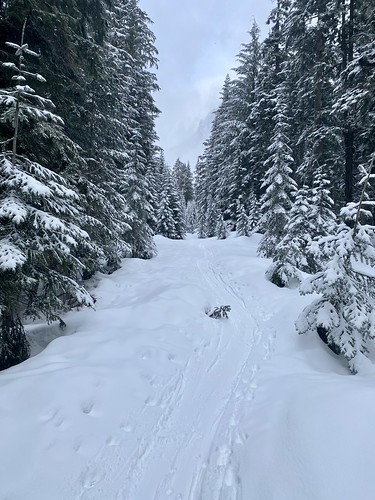 Following the Pacific Crest Trail up through Commonwealth Basin
I cruised up the skin track up into the Commonwealth Basin, and decided I would indeed head to Kendall Trees. On the drive up I had contemplated heading up towards Red and then dropping into Goat Creek basin, but I didn’t have a ton of time, and I was hoping that there was enough snow up high to milk some powder runs on Kendall.
I lost the skin track once I broke off from the Pacific Crest Trail and headed up towards Kendall, as there were a number of tracks coming down through the trees and I mistakenly followed a traversing downtrack. Half way up I ran into the skin track again and was merrily on my way.
Farther up I saw a group of two ski down past me. The skiing looked ok, but there wasn’t enough fresh snow to really call it a pow day. I kept chugging along and eventually pulled over to let a guy pass me, as he was moving fast. I kept my fingers crossed the snow would pile up the higher I went, as I was only a little above 4,200ft at this point. 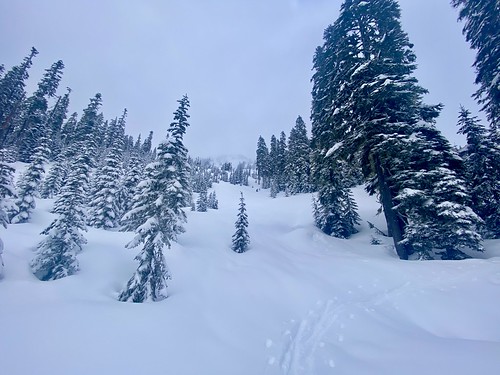 Skinning up through Kdenall Trees
Once I reached the tree line, I decided to traverse right towards a cluster of trees that I have often skinned up. Upon reaching the trees, I saw an existing skin track and could hear and see some other folks coming up behind me. I opted to continue on and break my own trail, figuring people would use this track and I wouldn’t have to worry about anyone being below me when I skied. 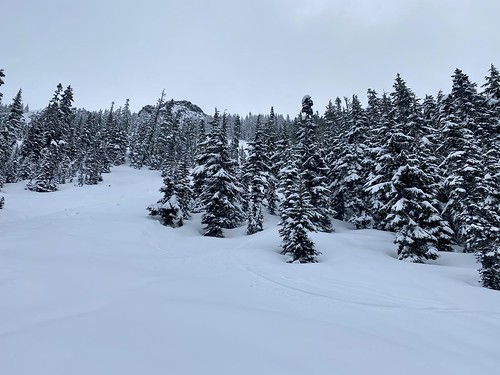 Skin track heading up
I laid a track in and stopped well short of the ridge. While everything was feeling stable, I have previously run into lots of wind slab once the trees start to thin out towards the top. There was 6” to 8” of snow, and unlikely to be much higher up. I transitioned to ski mode, and skied down. I hit the crust underneath the fresh snow on each turn, but the fresh snow and crust were consistent and it made for decent skiing. 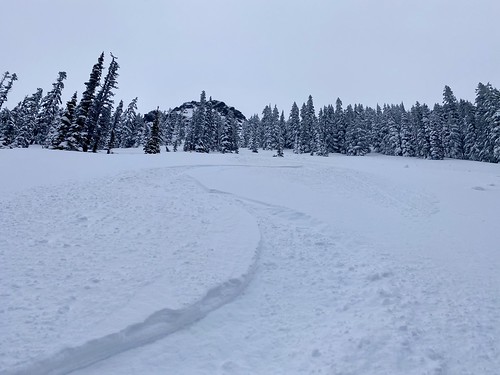 First turns down the upper part of Kendall
I skied down to where it starts to flatten out and then decided to do one more lap. Skiing wasn’t great, but good enough to warrant another run. I had to break trail for a short distance, and then was back on my skin track and at my previous stopping point.

Ski tracks from the previous run 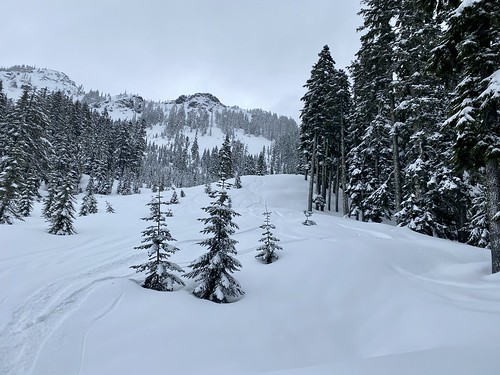 My turns from second lap
My second lap was more of the same, but I kept skiing down the fall line into the clearing, and once it flattened out, I made my way skiers right into the trees and descended down towards the bottom of Commonwealth basin, and then exited out along the uptrack.
A mediocre day of skiing, but good to get out for some exercise nonetheless. Kendall trees is certainly an easy and quick option for a ski tour, and the less than stellar conditions meant there were not a ton of people to contend with.