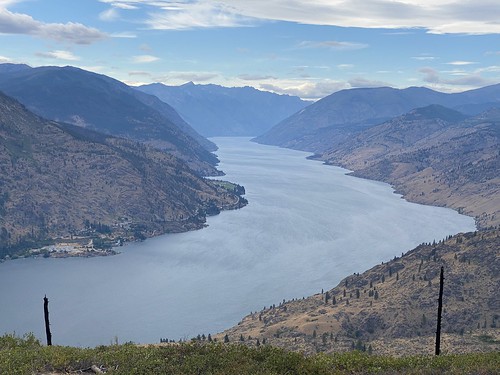 Length : 3.2 miles, roundtrip
Elevation Gain : 1200 ft.
This is definitely one of the better hikes in the Lake Chelan area, rewarding hikers with outstanding views of Lake Chelan from the top. This hike is a 20 minute drive from “downtown” Manson, and would be easy to pass by with an unassuming trailhead a ways off the road, no real parking lot to speak of, and few visitors.

The start of the hike begins once you cross the Lake Antilon dam, and quickly begins ascending through the forest. You quickly exit the forest and traverse along the side of Fourth of July Mountain until reaching a ridge, at which point you will catch your first views of Lake Chelan. As you progress up the ridge, you’ll have better views of Lake Chelan, as well as Wapato, Roses, and Dry Lakes. Upon reaching the top, proceed a little farther north for expansive views of Lake Chelan.

There is no parking area, however there are a couple of small pull-offs on the side of the road to park your car. No parking passes are required.

Type : hike
Length : 3.2 miles, roundtrip
Elevation Gain : 1,200 ft.
High Point : 3,548 ft.
Download GPX View Track Only
Intial impressions wouldn't lead you to believe this trail is the best day hike around Lake Chelan - there is no signage indicating a trail exists, nor is there a parking lot. But the views at the top more than make up for the humble beginnings.
After finding a place to park along the road, I walked along the dam and noticed a metal structure protruding from the surface of the lake. Antilon Lake was constructed in the early 1900's as an irrigation source for the region, and I'm guessing it may actually be a reservoir rather than a lake. Anyways, whether entirely built by man or not, the view was pretty and the stiff breeze coming down the lake was nice, as my late start in the day caused concern the heat might take a toll on me. 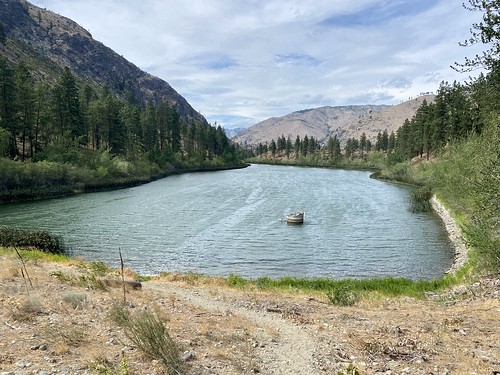 Walking along the dam at Antilon Lake
At the end of the dam I encountered the offical trailhead and my hike began in earnest. The trail quickly started gaining elevation, while the breeze from Antilon Lake kept me cool.
The trail is well kept and easy to follow, however it's not wide like some of the trails I have recently been on in the I-90 corridor. The dust I kicked up hiking lingered in the air as the recent breeze all but died. As I progressed up the steady incline, I felt the afternoon sun beating down on me and sweat pooled around my forehead and hoped I was close to reaching the ridge.
As I approached the ridge, a group of deer eyed me nervously. But continuning along the trail, they lost interest and went back to grazing on the grass and shrubs. It still amazes me how often I see deer while in the Chelan area. 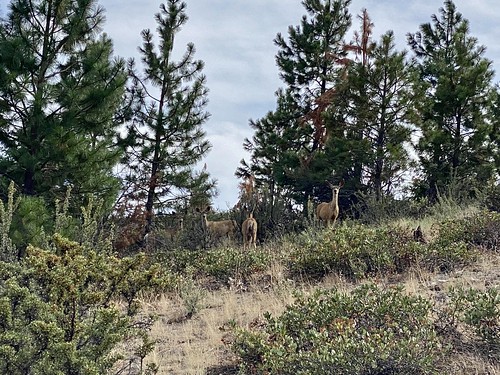 Group of deer checking me out
At about ¾ of a mile I reached the ridge and caught my first view of Lake Chelan. I didn’t bother stopping to soak in the view, as I knew the views would be much better as I continued ascending the ridge. And my hope was the top would provide great unobstructed views of Lake Chelan. 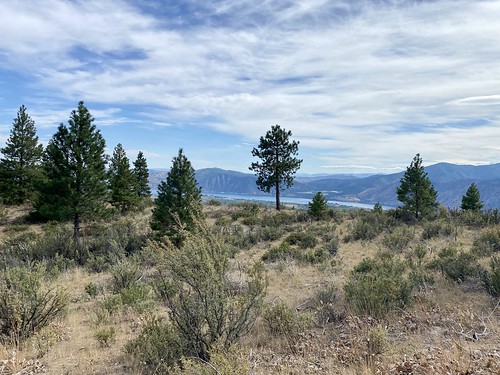 First view of Lake Chelan
All four lakes, Wapato Lake, Roses Lake, Dry Lake and of course the star of the show, Lake Chelan, came into view as I continued hiking up the ridge. The green agricultural land around Manson provided a nice contrast with the dry scrubland in the foreground.

Wapato Lake, Roses Lake, Dry Lake and Lake Chelan
There was evidence of fires in years past with scorched trees and shrubs all along the hike. In 2016, the Antilon Lake fire burned 315 acres before being contained. Remnants of fires are a common sight all across the Eastern Cascades, and unfortunately, not something that is likely to go away anytime soon. 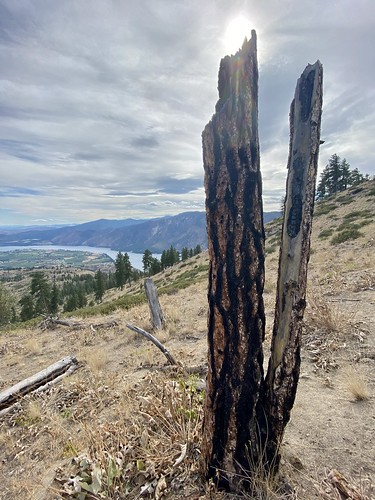 Burned Tree on 4th of July Mountain
During the hike, something scurried by my feet and startled me; I quickly jumped out of the way before realizing it was just a small lizard. The lizards continued to suprise me along the hike as I never really got used to the quick movement at my feet. I had hoped to snap a picture of one of the lizards, but they were too fast and quickly ran away. I did come across a dead lizard in the trail and used the photo to later identify it as a Western Fence Lizard. 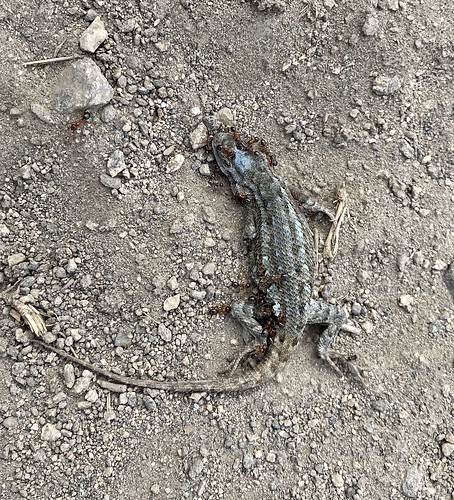 Dead Western Fence Lizard
I reached the rounded summit of 4th of July Mountain and walked further Northwest to get unobstructed views up lake. The wind was whipping again, which felt very refreshing. The smoke that had been annoyingly persistent the last couple of days had mostly retrated, only casting a slight haze as I looked North up Lake Chelan. I could see 25 mile State Park, and beyond that, civilization ceased and nature continued unabated. 25 mile creek, aptly named because it's 25 miles uplake from the city of Chelan, is the last stop by car, and any further progress up the lake requires a boat, or a float plane if one is so inclined. 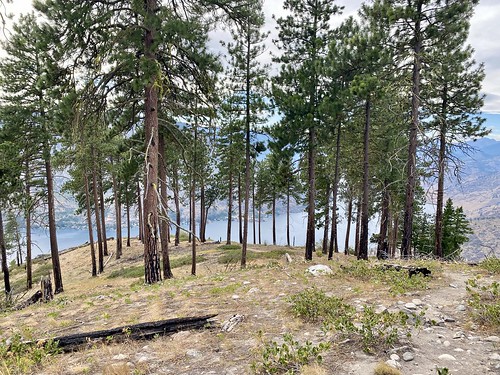 Summit of 4th of July Mountain
The hike down was uneventful, and upon reaching the bottom, I saw a couple of folks in a boat on Antilon Lake trying their luck at fishing - that’s the only people I encountered on this particular hike!
The End Download my GPXMore info abou the hike at the Lake Chelan Trails Alliance