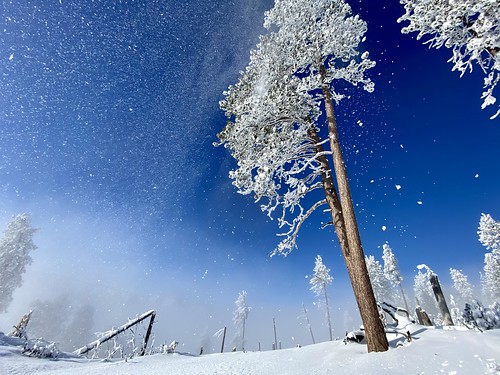 Length : 3.4 miles, roundtrip
Elevation Gain : 1,240 ft. ft.
Fourth of July Mountain makes a great winter adventure, whether via ski touring or snowshoes. It provides stunning views of Lake Chelan from the summit, although in the winter time it’s common for a cloud layer to sit just above the lake and obscure the view. After a short approach on Grade Creek Forest Service Road, you will turn left and walk along the embankment/damn on the Southern end of Antilon Lake.

You can follow the summer trail up through the trees, and then it’s likely you will lose the trail once it opens up. Continue side hilling up the mountain towards the ridge, and then follow the ridge to the summit. Snow coverage can be sparse even in the dead of winter, so if you plan on making this a ski tour you want to double check the snow conditions and expect to ding up your skis on some rocks! It also makes an excellent option for snowshoeing. Don’t expect there to be a trail to follow, as this adventure doesn’t see a lot of people.

Drive on WA-150/W Manson Rd towards Manson, and turn right on Wapato Point Road for 2.3 miles. Turn right onto Upper Joe Creek Road and after 2.2 miles continue on Grade Creek Road. In the winter, the road will end at The Antilon Lake Sno Park, with a parking lot to the left of the road.

Type : snowshoe/ski tour
Length : 3.9 miles, roundtrip
Elevation Gain : 1,900 ft.
High Point : 3,532 ft.
Download GPX View Track Only
November had been a crappy month for me, coming down with Covid at the start of the month and then getting sick again with who knows what while on vacation in Mexico with the extended family. I was finally feeling better, but didnt’ know how much energy I would have. I needed something relatively short, and didn’t want to drive a long ways for what could be a short amount of time on the snow.
I decided on Fourth of July Mountain, but didn’t have high hopes on the skiing aspect, as being this far East means a lot less snow in the mountains, especially on a smaller mountain like Fourth of July. After watching a disappointing but somewhat expected loss to the Netherlands in the World Cup, I wondered if my ski tour would have a similar feel - tempered expectations leading to an expected but undesirable outcome.
I was the first car on the forest service road which was evident because it had snowed a couple of inches during the night and the road wasn’t plowed. Fortunately, the Antilon Lake Sno-Park wasn’t officially open yet, as I don’t have a Sno-Park Pass. I parked the car on the side of the road, quickly threw on my gear and started skinning up Grade Creek Road, following snowmobile tracks from the preceding day. 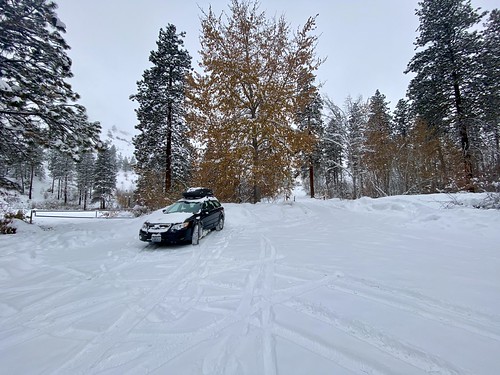 Parking at the unopened Antilon Sno-Park
I had done this hike once before a little more than a year ago, so it was easy to know where to leave the road and go across the damn on Antilon Lake. As I started up the hike I noticed a couple of snowshoe tracks. But the tracks stopped fairly quickly as soon as I broke out from the trees. 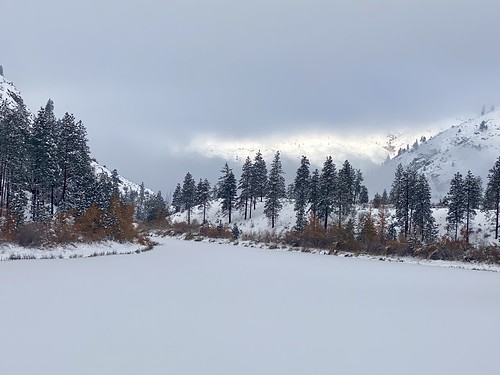 Lake Antilon
Breaking trail required more effort than I expected. There was a couple feet of unconsolidated snow, and while it was fairly light and fluffy, it still took some work to lay in my skin track. Visibility was limited, but I could make out the ridge where the summer trail went, so I proceeded to sidehill up towards the ridge. I could see a couple of lines coming down through the rocks that might be skiable, and made a mental note to check them out from above. 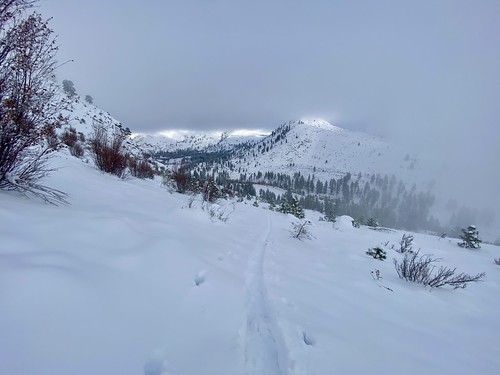 My skin track up the side of Fourth of July Mountain
Upon reaching the ridge, the snow became a little easier to skin on - it was a more Southernly aspect and there was a strong crust about six inches down that supported my weight. Snow coverage seemed decent given how early in the season it was, and now I was hoping that I might actually be able to link some turns on this trip. Not only that, but the clouds were dissipating and visibility was improving! 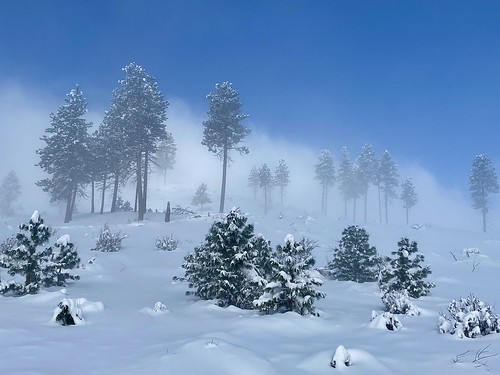 Heading up the ridge on Fourth of July Mountain
I slowly proceeded up, taking time to enjoy the clouds swirling around me. It didn’t feel windy, but the clouds were moving fast, and I was getting some short lived sun breaks. If I got lucky and the cloud burned off, I would have to think about skiing down the Northern Side towards the lake, as I remember that view being pretty awesome when I last hiked here. 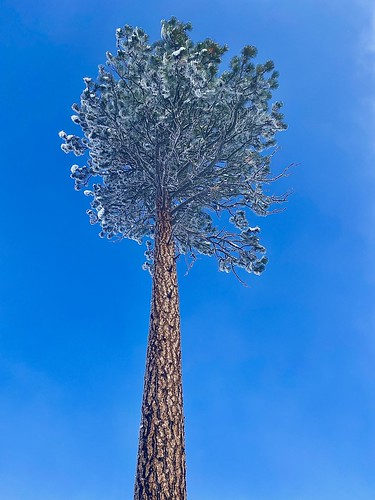 The sun and blue skies coming out 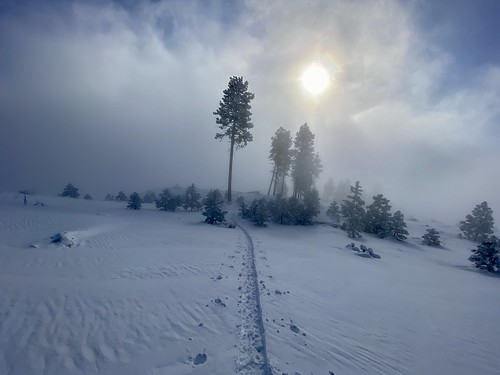 Looking back down my skin track
I reached the top, and decided to take a nice break to eat some food and drink water. The sky above was opening up, however there were still a lot of clouds around me. I have noticed in the winter there seems to be a near permanent low lying layer of clouds around where we live (just north of the town of Manson, and If you get high enough, you can get above the clouds. 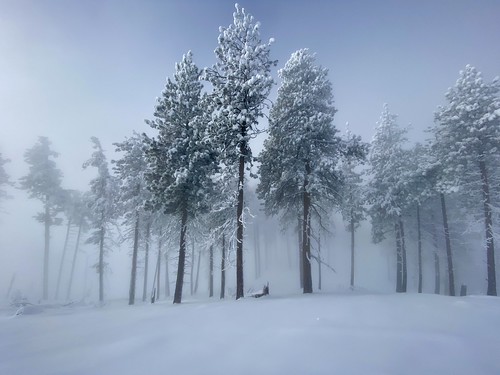 Clouds and trees from the summit of Fourth of July Mountain
I decided I would ski down a ways near the skin track, and then come back up to the Summit. The turns near the top were actually pretty good. There was some decent powder, and I wasn’t hitting anything underneath. However, farther down, I started hitting some rocks. I was skiing through a rock field - I could see the outlines of the rocks lurking below the snow. I slowly skied through the rocks, hitting a few more along the way and then the conditions improved again. 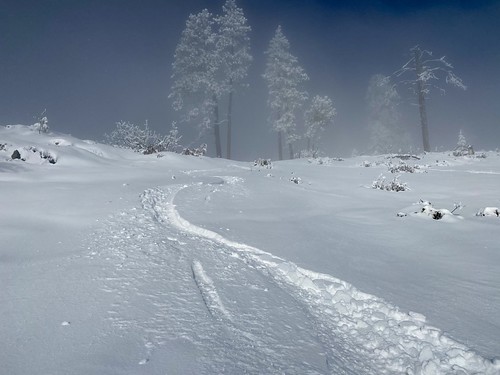 Powder turns near the top 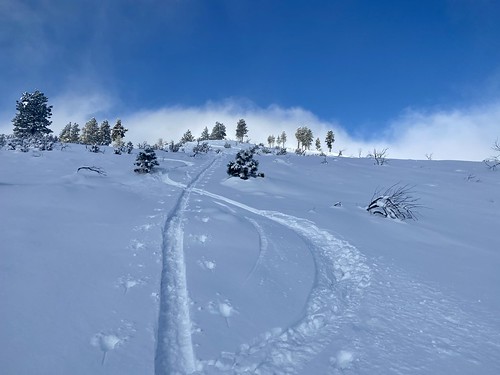 Skiing along the skin track
As the slope flattened out along the ridge, I decided to stop here and re-skin and make my way back up to the summit. I was still hopeful that clouds would burn off and I would get some views of the Lake, but that never happened. The lower layer of clouds hung in there and never showed any sign of wanting to leave. It was a quick skin back up to the top using my existing track. 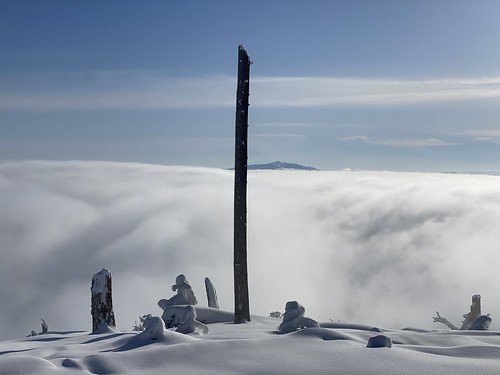 Lower layer of clouds hanging in the valley
This time skiing down I stayed in the gully as long as I could, rather than cutting over towards the skin track, and the skiing was good here, and I hoped to avoid the rocks as much as possible. I still encountered some rocks, but got some good turns in and then went over to see if I could find the gullies I had noticed while skinning up. 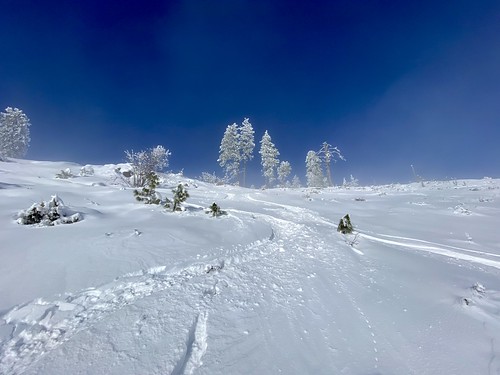 Ski tracks from second descent
I traversed over and fortunately came out exactly where I needed to be, at the top of a small bowl which funneled into the gully. I wasn’t sure if I should attempt to ski this, and run the risk the coverage wasn’t good enough, or follow my skin track back down the ridge and loop around. The gully was definitely the more direct approach, and I decided to give it a try. Worst case, I cloud skin back up. 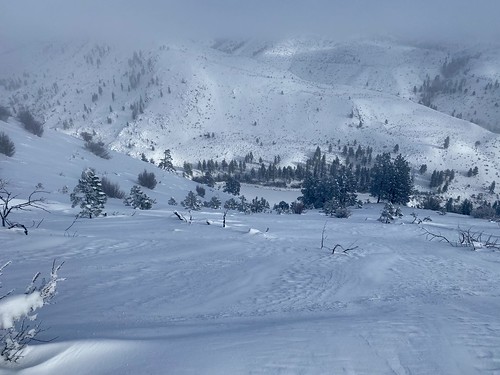 Looking down towards the trailhead
The ski down was much better than expected. I wasn’t hitting anything underneath and was able to link some nice turns on some stepper terrain. Farther down I hit one rock, and eventually decided to traverse over towards my skin track near the bottom. It looked like there were a bunch of large objects buried under the snow. Maybe they were just bushes instead of rocks, I didn’t want to test my luck and find out. 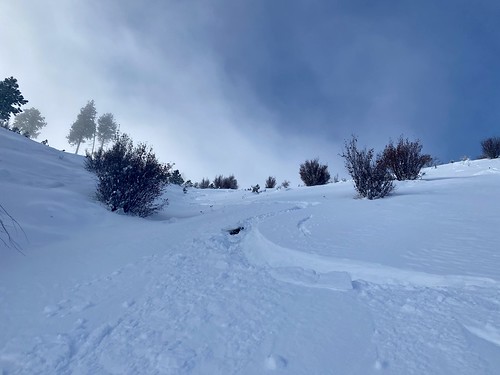 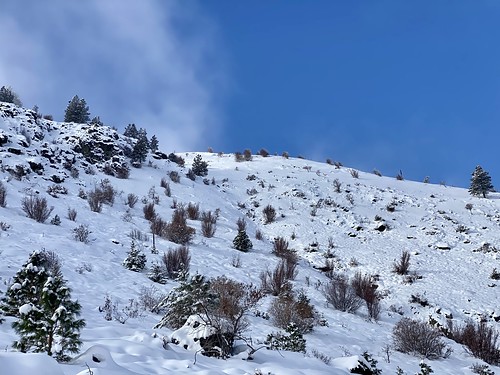 My tracks coming down the gully
I hoped on my skin track and exited back out to Lake Antilon. Had to throw my skins on my shoulder do a quick hike back up onto the road. I had heard a number of snowmobiles whizzing around while on my tour, and but didn’t encounter any until I made it back to the parking lot. There were a number of folks loading and unloading their snowmobiles, and a family had set up a firepit and tables with food in the unplowed Sno-Park lot while their kids cruised around the lot on snowmobiles! 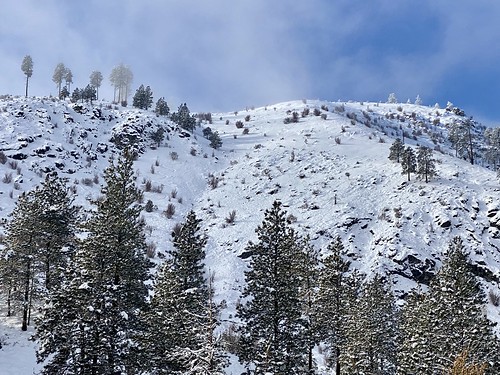 Final look at the gully I skied
All in all, a great day. Coverage was very low, but I was able to sneak in some legitimate powder turns and only have a couple of small scrapes on my skis. It’s a really scenic area, even without being able to see Lake Chelan. I’ll be curious to see if we get enough snow depth this winter to not have to worry about coverage. It’s only 20 minutes from my house, and definitely a tour I would do on a regular basis if there was more snow.