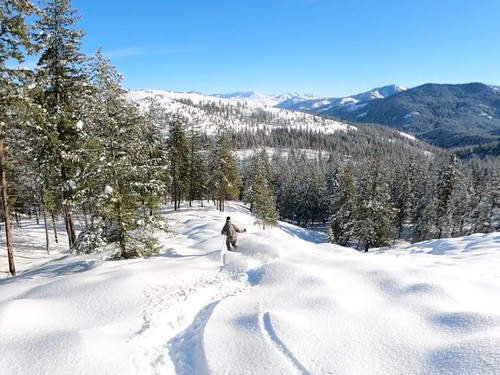 Length : 5.1 miles
Elevation Gain : 2050 ft.
Short runs through well spaced glades makes this a fun and easy tour in the Twisp River Valley. This isn’t a spot you would likely plan for a ski tour, as it’s a seemingly random spot within the Twisp River Valley. However, this particular spot above Coal Creek happens to be directly behind my friend's house, and can provide nice turns on the right aspects.

We accessed through private property, but Little Bridge Creek Road gives you access to Forest Service Road 1140 / Thompson Road will quickly bring you to the slopes above Coal Creek. Skin along the road and look for open areas and/or well spaced glades to your left, and enjoy some short but fun descents.

Drive east on Twisp River Road for approximately 8.2 miles until you reach Little Bridge Creek Road on your left (it is not plowed).

There is no official parking lot available in the area.

Type : ski tour
Length : 5.1 miles
Elevation Gain : 2,050 ft.
High Point : 3,000 ft.
Download GPX View Track Only
I hadn't seen Tim since his wedding this past summer, and was excited to get out with him on the eastern side of the Cascades. We had spent many years ski touring around Snoqualmie Pass and the volcanoes in our early ski touring years, and I was looking forward to seeing what the Twisp River Valley had to offer.
We decided to hit the area directly behind his house. We walked out the back door, threw our skins on and started up a trail which followed Coal Creek for a bit, before peeling off to make our way up the hillside and towards Thompson Road. Before I knew it, we were at the spot where he had his wedding, and enjoyed some nice views of the Twisp River Valley. 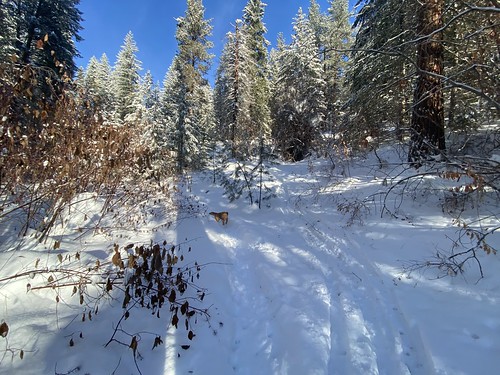 Beginning of the tour
Somewhat surprisingly, there were a couple of ski turns on an open slope above us. These weren’t put in by Tim, although looking around I could see some of his turns from the preceding days. We followed the skin track from the turns up a little bit, then laid in our own track up to the top of the ridge. 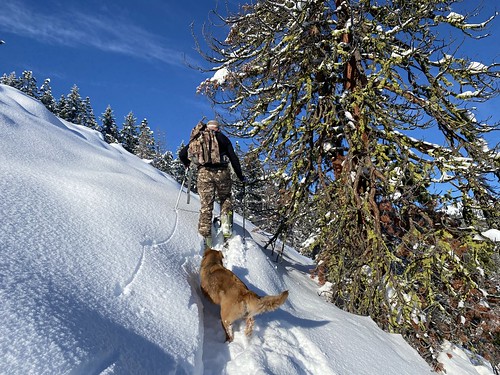 Tim and Stony breaking trail
The first run didn’t disappoint. We skied off into an open area and enjoyed some nice powder turns on a good pitch. There was about 6” inches of snow with a stiff crust underneath. We hit the crust when we made turns, but it was consistent and I wasn’t worried about breaking through. We entered into some well spaced trees and continued our turns down to the forest service road. 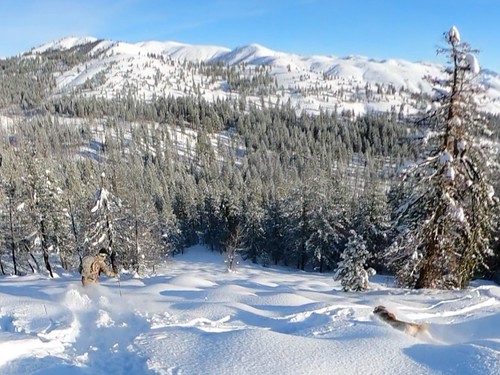 Tim making turns on our first run
The previous day Tim had skied across the valley and noticed a good line near where we were, so we transitioned and started skinning up the forest service road. We noticed a spot where the trees thinned out on the slope above us, and started heading uphill.
We did two laps on this slope. The runs were only about 400 vertical feet, but they felt longer than that. Similar to the previous run, it was fairly open at the top, and then progressed into well spaced trees. While there was good coverage, neither of us hit anything on any of our runs, the slopes had a number of bumps in them, which we suspected were buried bushes, probably sagebrush.

Second lap
After the second lap, we headed back down the road and then skinned up towards where we had skied our first run. Near the top, we found our skin track and followed that for a bit before going farther along the ridge, eventually coming upon the open area we had seen at the start with a few turns on it. 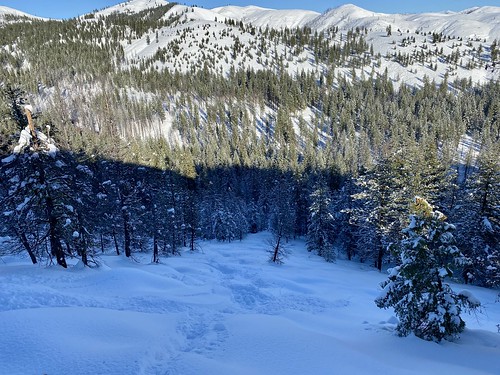 Looking down on turns from our first run
We skied down the open slope, and then made our way over for the final ski down into Tim’s property. We eyed some mountains further up the Twist River Valley, discussing possibilities for future tours. Tim has a side by side with tracks on it, so there are a lot of options in terms of accessing terrain in the area. At the bottom of the run, we were enveloped by the shade of the Twisp River Valley and the resulting flat light, making skiing a little challenging as we had been skiing under a beautiful sun all day, nary a cloud. 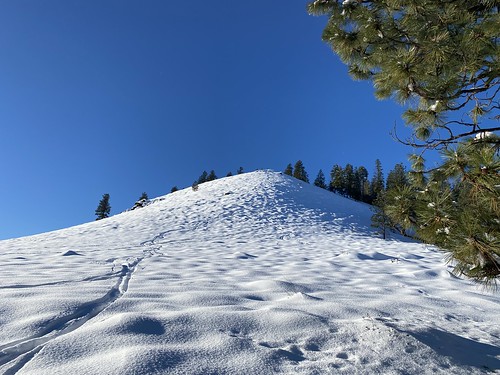 Turns on the open slope 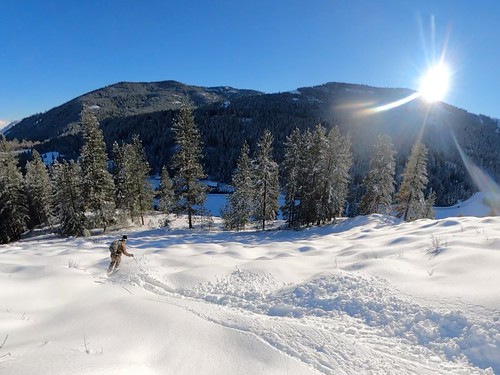