I was unsure what the weather would bring this weekend, but upon waking up on Saturday, saw a decent weather forecast around Twin Falls in the morning, and we decided to head out and try our luck. A little bit of rain in Seattle right before jumping in the car can’t dissuade us, and we were rewarded by partly sunny skies. The parking lot was filling up quickly, and was completely full by the time we were done with the hike, but we were able to get a spot.

The trail starts out relatively easy, following the river. While there are numerous rocks and roots along the trails, it stays flat for the first ¾ of a mile. There were numerous spots to venture off the trail for a better view of the South Fork Snoqualmie River, but we opted to keep hiking and make some progress. 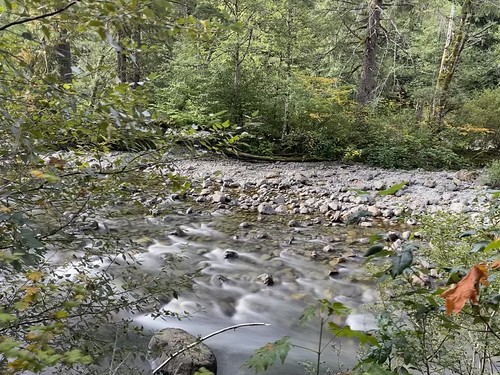 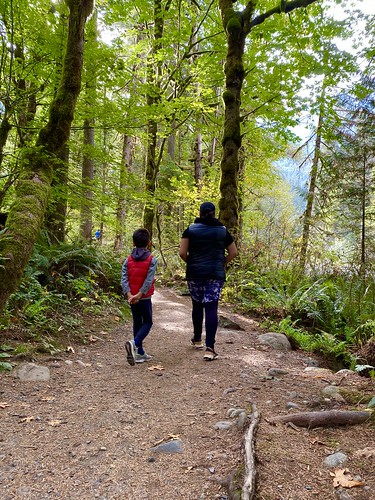 Easy start at the beginning of the hike
There’s a lot to look at on the hike in addition to the River. Numerous large trees covered in moss, various types of ferns and lots of other plants. It had been a dry summer, but the forest was very lush, probably helped by the recent rains. 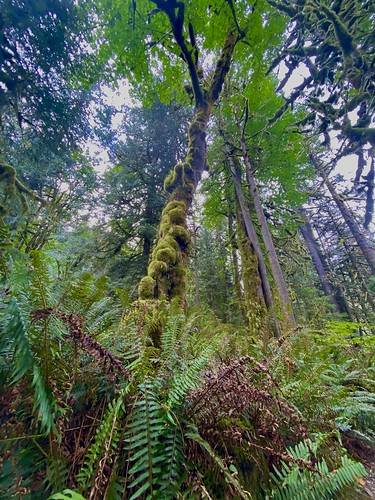 Tall mossy tree along the trail
We reached a large sloping rock on the right side of the trail, and my son quickly climbed atop the rock and walked up to the high point. After a couple of photos, I joined him on the rock - it was a cool vantage point to survey the trail and the forest. 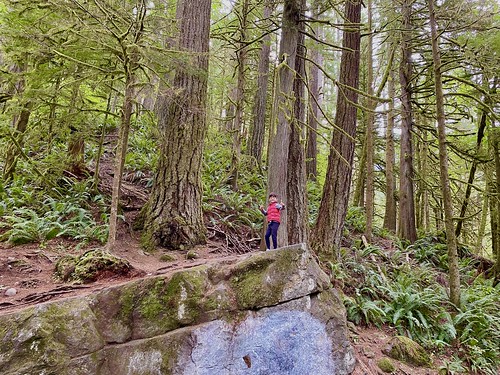 Fun rock to climb on the side of the trail 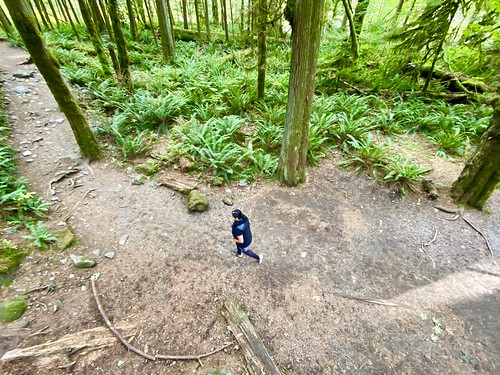 Looking down on the Twin Falls trail
Shortly after the rock, the trail begins to climb a little. It’s not a large amount of elevation gain, but my six year old son was ready for a quick rest and food at the top of the hill. The uphill also didn’t tire him out enough to play on some fallen logs! 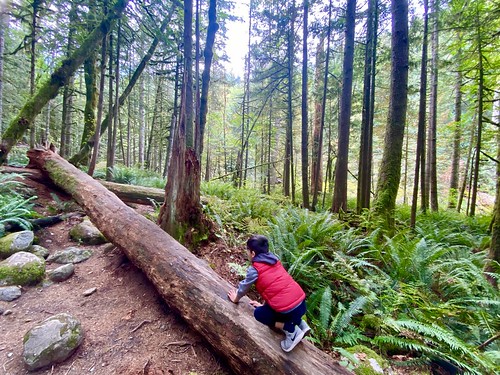 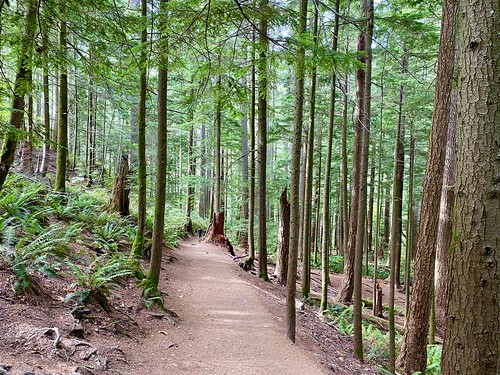 Nice flat part of the Twin Falls trail
There was some more uphill, with some switchbacks involved, as well as downhill. We were now a ways off the river, although you could hear the river the entire trip. There was only one of two points in the hike where you could hear cars along I-90, and the sound was somewhat obscured by the river. At one point we passed a huge tree along the trail. A photo didn’t do it justice, so I had my go down and stand next to the tree for perspective. 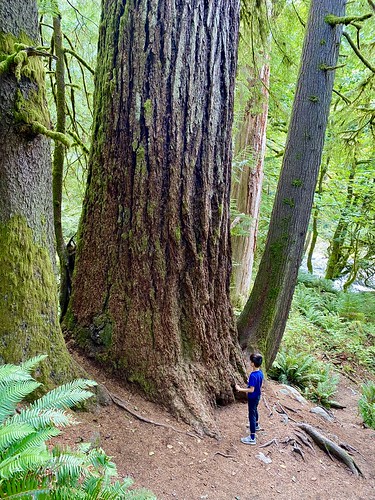 Huge true along the trail
Then it was on to the second uphill push and after a while we reached a junction where the trail headed down stairs to the right towards a lookout of the Twin Falls. We opted to continue straight along the main trail and head to the Twin Falls Bridge. At the bridge we took in the views. Up river there is a nice small waterfall, and on the other side you can see the pool of Twin Falls far below, giving you a sense of the size of the falls. 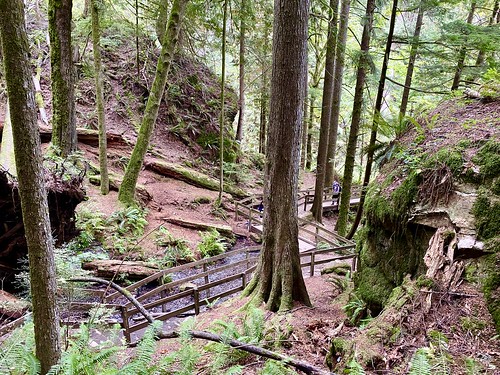 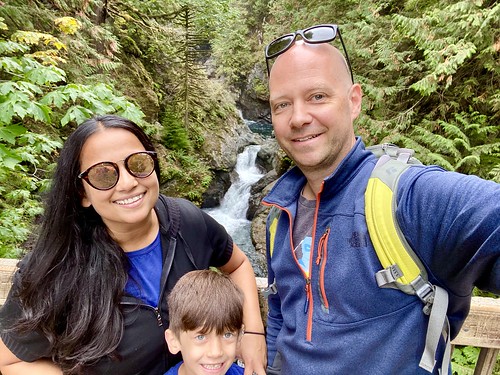 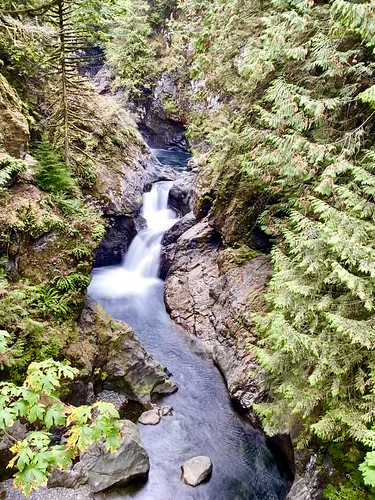 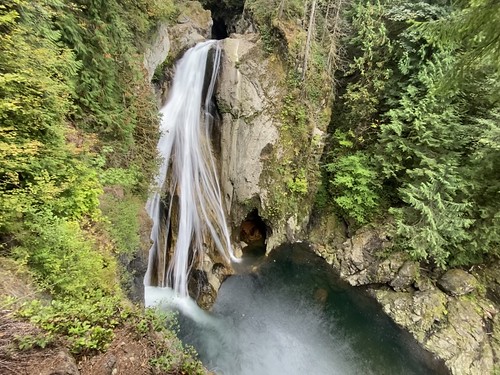 The star of the show - Twin Falls 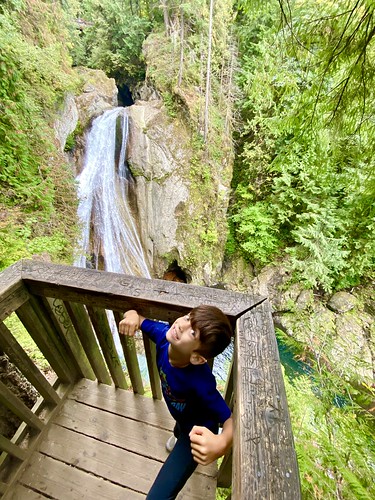 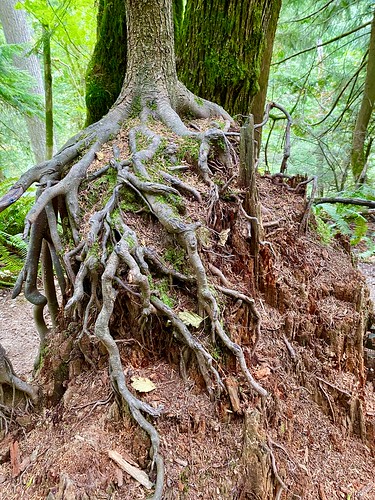 Nurse log with tree growing on it
We continued on the trail back towards the car, and found a place below the falls to venture off the trail and eat lunch on some rocks next to the river. We had a fantastic view of the falls, and could see people walking across the Twin Falls Bridge. After relaxing by the river and finishing our lunch, we hit the trail and made our way back to the car. Time to get home and watch the Seahawks play! 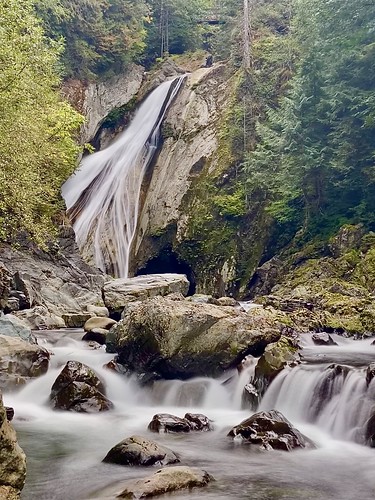 View of Twin Falls from the river 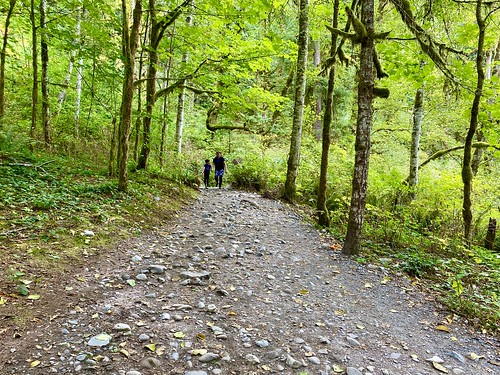 Returning to the car

Our final stats were 3.17 miles and 712ft of elevation gain. Twin Falls is a great hike, with amazing views of the waterfall and great places to sit next to the river. Great hike for the family, just be aware there are some steeper sections to hike up and down, so I wouldn't classify it as a super easy hike. But it's worth the effort!