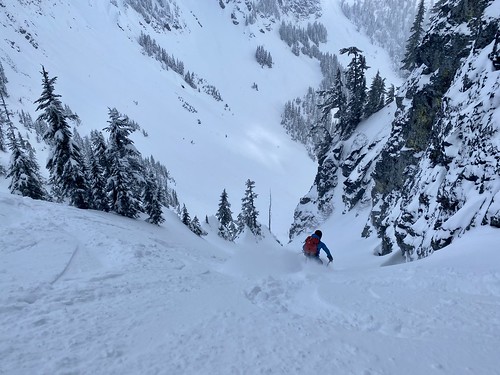 Length : 7 miles, round trip
Elevation Gain : 3800 ft.
The Silver Twins in the Kendall Adventure Zone are a set of north facing couloirs which drop down into Silver Creek Basin and provide an excellent ski, especially on a power day! They provide about 1,000ft of skiing on consistent pitch. They both start with fairly steep slopes in a well defined couloir, with the skier's right couloir set against a large rock wall. A little over a third of the way down, the couloirs give way to open slopes and the pitch moderates as you descend.

To access the couloirs, proceed up the Commonwealth Basin and through Kendall Trees. Once near the treeline, head east to attain the sub ridge that overlooks Kendall Peak Lakes. From here there are two options. Make your way up the sub ridge and once near the top of the main ridge, head east / right to reach the entrance to the twins. Note, you will need to descend a little along this small ridge. Alternatively, from the sub ridge you can work your way across an open slope and reach a small bench above Kendall Peak Lakes. From here, you can lay a skin track through the trees directly to the entrance of The Silver Twins. Note, there are a number of small cliffs in this area near the bench, and it can be tricky to find a suitable skin path.

Exiting Silver Creek Basin also provides a couple of options. You can proceed back up the slope you skied down, trending looker's right, and bootpack up one of the smaller couloirs to the looker's right of the twins. It's likely you will have folks skiing down the slope you are skinning up, so careful skiing and communication are key. From here, retrace your tracks back into Commonwealth Basin.

Alternatively, there is a well defined notch on the southeast slope across from The Twins that can be used as an exit. It rarely sees downhill traffic, although it does get a lot of sun effect. From the notch, you will ski down into the Commonwealth Basin. There are a number of cliff bands to navigate, and when in doubt head skier's right. One final option : you can also follow Silver Creek down into Gold Creek and exit out the valley. This is a longer exit, and will leave you far from your car.

You can park in the Summit West base area, and the lots you are allowed to park in will depend on whether it is a peak day or not. Please review The Summit's uphill travel policy for the most up to date information on where to park. As of 2022/2023, lot W3, which is immediately to your right as you enter Summit West is both the most convenient place to park and the one for peak days.

Type : ski tour
Length : 8.3 miles
Elevation Gain : 3,830 ft.
High Point : 5,487 ft.
Download GPX View Track Only
I was not able to get out Sunday at the start of the storm, nor on Monday as I had work meetings starting early in the morning; however I had time on Tuesday morning for a dawn patrol ski tour. Time mentioned he had been out on Monday and Mount Snoqualmie had been hit hard, so we opted to head over to the Kendall Adventure Zone and go for The Twins.
Tim and I carpooled and met up with Sylvia and Christian at the Summit West parking lot. There was talk off heading out towards Icy Gash after the Twins, which wouldn’t work with my time constraints, so we opted for another car in addition to mine in case folks wanted to continue on. It was pretty damn cold at the parking lot, but that raised expectations of quality snow.
It was an uneventful skin up the Pacific Crest Trail, and as we left the PCT and ventured up towards Kendall, it was a little difficult to find a consistent skin track. The Kendall trees had been skied hard on Monday and it was tough to differentiate between uptracks and people traversing across the slope. Eventually we found a legitimate skin track and worked our way up through the trees to the top of the treeline, and then started traversing across.
The sky was mostly cloudy, but the sun was peaking through occasionally, and I pulled out my phone to snap a picture of the group skinning ahead, illuminated by the sun. However, my iPhone wouldn’t unlock and complained it was “Disabled for 9 minutes”. I figured it must have been jostling around in my pocket and tried to unlock, and when I checked again a couple of minutes later, it still had the same issue. I tried turning it off, and on, but then it went up to 15 minutes… It finally went away, but not before I had taken my ski gloves off a number of times while skinning. 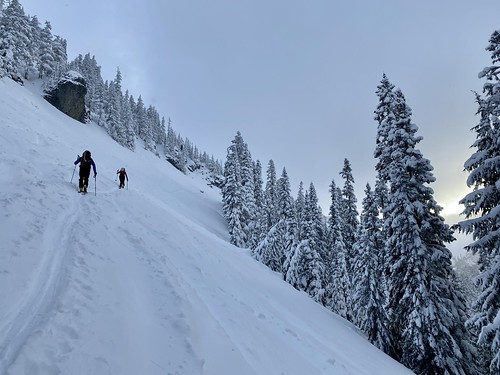 Skinning across southern aspect of Kendall
As we rounded the corner to make the final skin up to the ridge, my hands were completely frozen in my light weight gloves. Fortunately I had brought my heavy duty winter mittens in addition to my winter gloves, and after donning the mittens and more skinning, my fingers started to feel better.
We took a look at the skier’s left Twin, and it looked a little wind effected and it looked like tracks from yesterday had been covered by the wind, so we went over to the skier’s right Twin. There were a couple of tracks down, but still plenty of snow and no wind effect in sight. We de-skinned and dropped in for an awesome ski, with great quality snow all the way to the bottom. I don’t think I have every been disappointed on the Twins... 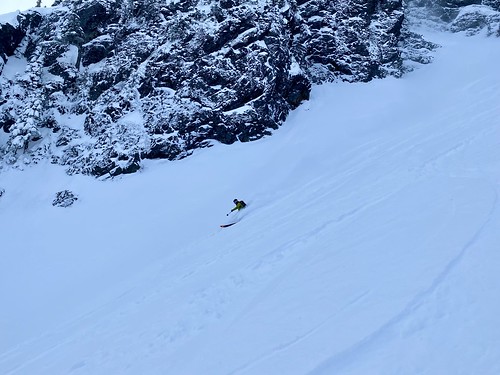 Tim on the lower section of the skier's right Twin 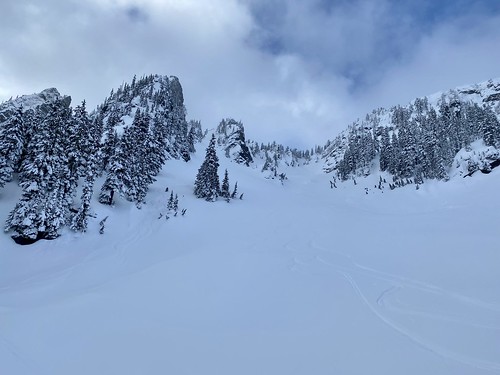 Looking up at our tracks in the Kendall Adventure Zone
At the bottom of the run, the rest of the group decided to proceed on. It was great snow, and there was still a lot of time left in the day. As I surveyed the Kendall Adventure Zone, I saw only one skin track heading out, and it was not in the direction I was expecting. I could only see the start of it, but the track was heading over towards Kendall Catwalk/Alaska. I really didn’t feel like breaking trail, and I hoped against reason that maybe the track went up to the ridge slightly out of sight.
I followed the skin track and then quickly bailed, as the track started to descend and gave no indication it was going in the direction I needed - which was back to the car. Oh well, time to break some trail, and do it fast, as I needed to get back to work. I made reasonable time up to the exit notch, and was treated to great views of the Kendall Adventure Zone. 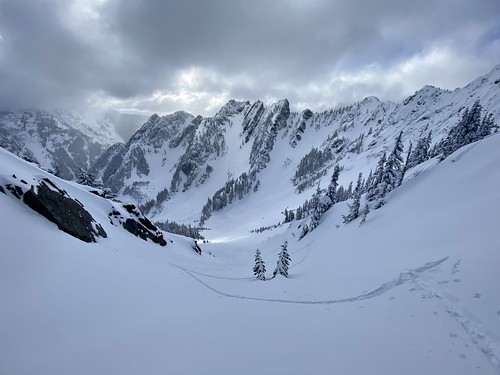 Looking back on my skin track and the Kendall Adventure Zone
I quickly transitioned to ski mode and started heading down. There was a nice little chute I have skied a number of times that I wanted to hit, but I started second guessing myself as it had been a couple of years at least since I last skied it. But the terrain looked familiar and I was able to get to the ramp and into the chute without issue and enjoy another great ski down. 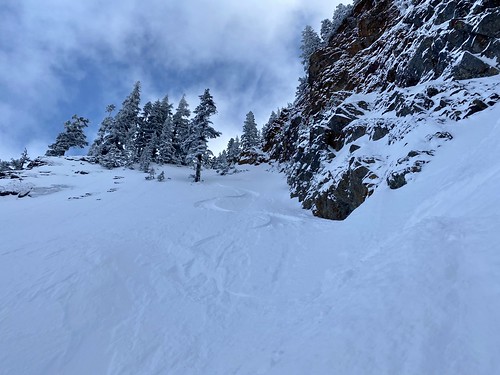 Ramp into the chute 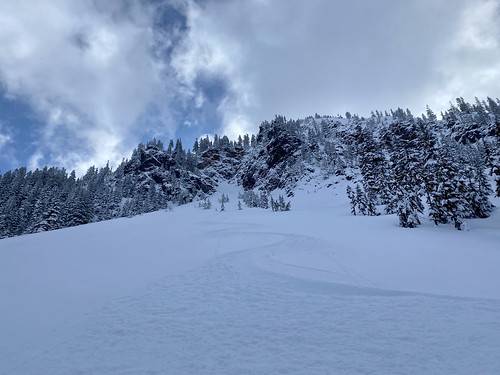 My turns down the chute
Then it was time to head out of the Commonwealth valley. I skied/traversed along the slope, but ran into lots of old avy debris, including some larger trees. I finally gave up, and skied down to the valley floor, put on my skins and skinned until I reached a ski/snowshoe/skin track in a good spot to rip the skins and ski out.
While I really wish I could have stayed out all day and hit up Icy Gash and Silver Lining with the rest of the group, I managed to get in a really good ski down a fun line and still get a full day’s worth of work in. All in all, a great dawn patrol at Snoqualmie Pass. My GPX file My photos on Flickr