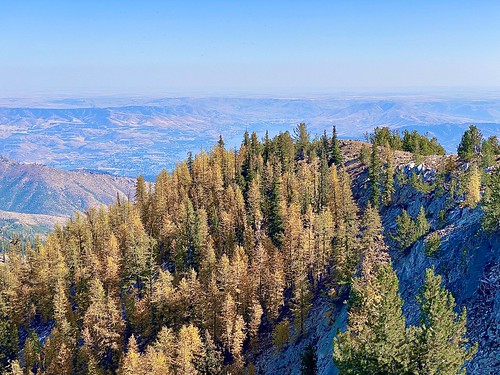 Length : 3.6 miles, roundtrip
Elevation Gain : 1201 ft.
This short hike with modest elevation gain may still leave you breathless. Is it the elevation reaching nearly 7,200ft at the summit, or sweeping views of the Entiat Mountains and Lake Chelan? During the fall, golden larches situated on the northern side of Stormy Mountain are on full display from the summit. And if the 3 mile round trip isn’t to your liking, you can always proceed further North on the Devil’s Backbone trail. The only thing keeping this trail from being more popular is the long approach on forest service roads.

Windy Saddle Trailhead can be accessed from either the Entiat Valley or from Lake Chelan. There are a number of different ways to access from Lake Chelan, however the below directions are for 25 Mile Creek, the most common approach.

The quality of the Slide Ridge Road will vary. I found the road to be easy driving for roughly the first 10 miles, at which point, the road became much rockier. I had no problem with my Subaru Outback on the last 6 miles, but would have second thoughts about taking a low clearance vehicle.

There is plenty of parking space, given the low number of visitors to this trail. No parking passes are required.

Type : hike
Length : 3 miles, roundtrip
Elevation Gain : 1,100 ft.
High Point : 7,198 ft.
Download GPX View Track Only
I had been planning on a solo larch hike to Crater Lakes, but decided it was still a little early for a full golden larch display, so had to find something suitable for the family. When I realized that Stormy Mountain was only a 1.5 miles hike in, and would potentially have some larches, it was a go.
It's a long drive on Slide Ridge Road. We stopped at one point to snap some photos of Lake Chelan, but halfway through the drive my seven year old son was commenting that this might not be the best choice for a hike. But a couple of miles from the trailhead we passed by some golden larches and all was well, arriving at the empty trailhead without any further comment. 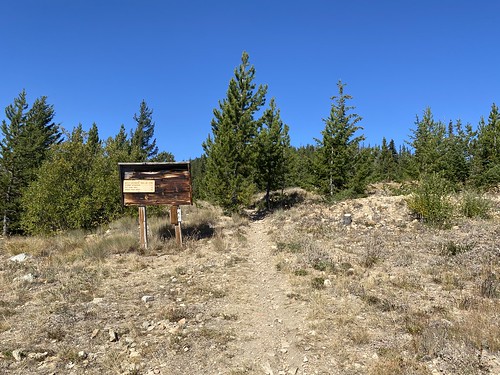 Start of Devil's Backbone Trail
My son and I slowly started up the trail, while my wife charged ahead. She was anxious to make sure this registered as a strenuous exercise with her apple watch, and my son’s pace can be rather slow. The trail was dusty and narrow, and ascended gradually up the mountain, with pine trees providing shade. I had thought the high elevation might provide some cool temps, but it was warm out, especially in the shade. 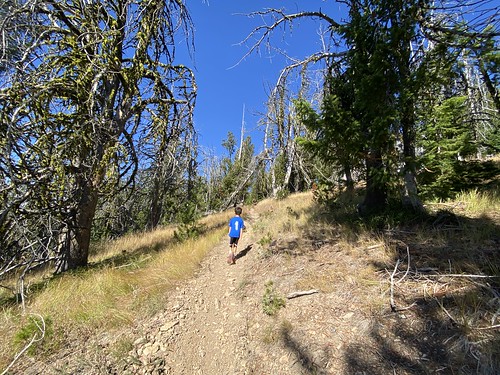 Devil's Backbone Trail up to Stormy Mountain
Some of the shrubs along the trail were turning colors, however no sight of any larches yet. We took a couple of breaks and watched a very curious Chipmunk check us out - running back and forth on a log and staring us down whenever it came to a stop. 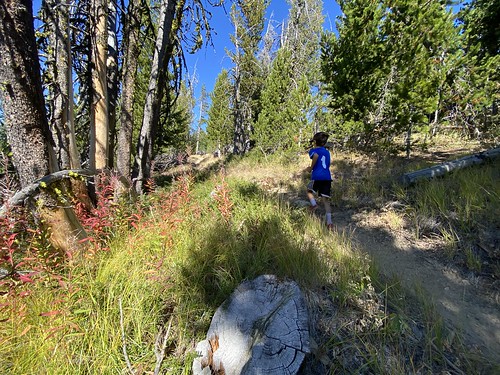 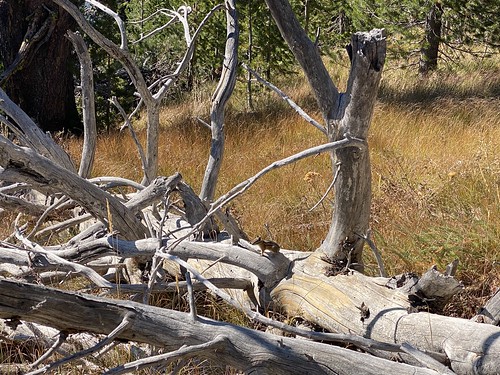 Curious Chipmunk
We started to catch some views of the surrounding mountains, but unfortunately the smoke obscured the mountain farther away. But fortunately, I couldn’t really notice the smoke unless looking off in the distance. 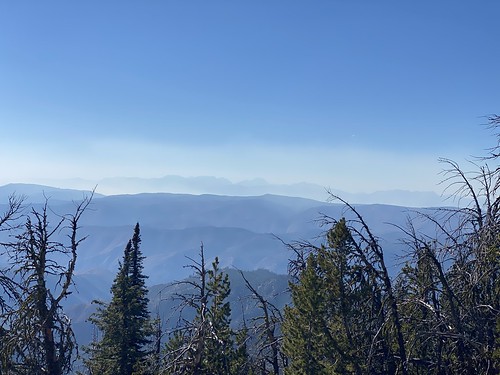 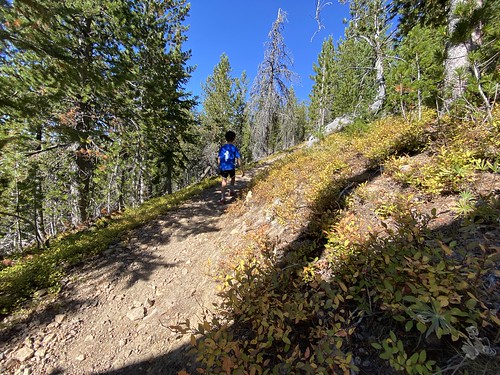 Hiking up to Stormy Mountain 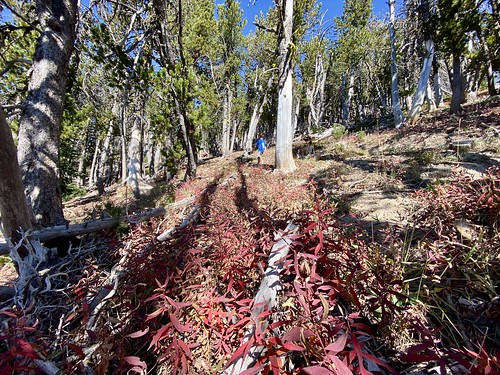 Fall colors on the way to Stormy Mountain
We came to what looked like an intersection with an old trail, and I think it was the old Story Mountain Trail #1233, as we were getting close to the ridge. I probably would have jumped on the other trail if I was solo, but with my kiddo in tow, there would be no diversions. 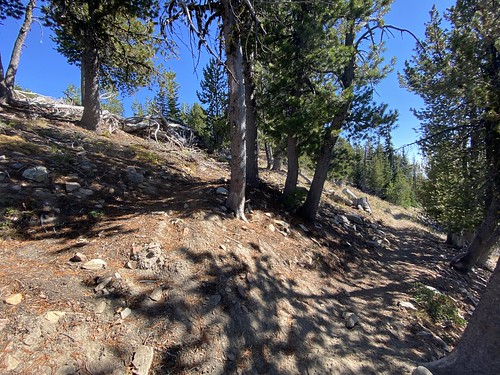 Intersection with the old Stormy Mountain Trail
A short while later we popped up on the ridge, with great views of the surrounding Entiat Mountains, and our first glimpses of Larch trees on the hike. There were a couple of larches that had turned close to the trail, and on the Northern Side of Stormy I could see a stand of larches that were turning. 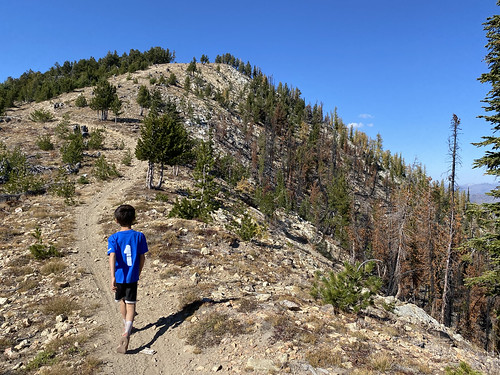 On the ridge of Stormy Mountain 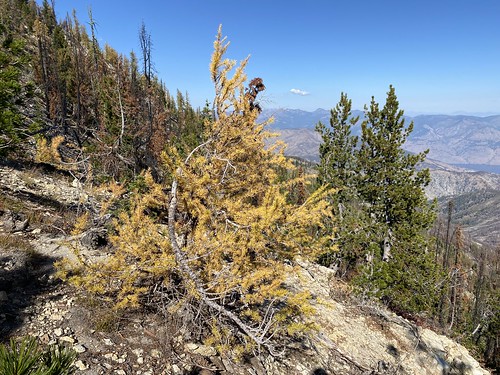 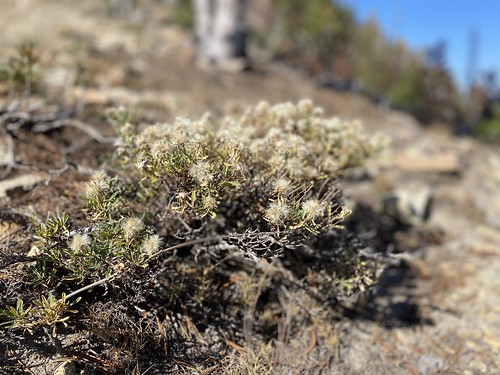 Some flowering plant on Stormy Mountain
As we traversed along the side of Stormy, I checked the map again and realized the summit was up a couple of hundred feet. I called my wife, and she said she was already on her way back, arriving a couple of minutes later. She was thinking of head back to the ridge, but I wanted to get up to the summit, so my son and I climbed the grassy slope up to the top. I beckoned my wife to follow, as the views were great and there was an old fire lookout that made the perfect stop for a lunch break.

Larches on the side of Stormy Mountain
We munched on some food, drank some water and then walked along the Stormy Mountain’s ridge, enjoying the view of Lake Chelan and the larches. The smoke wasn’t as bad as to the West, but there was a haze when looking at the lake. 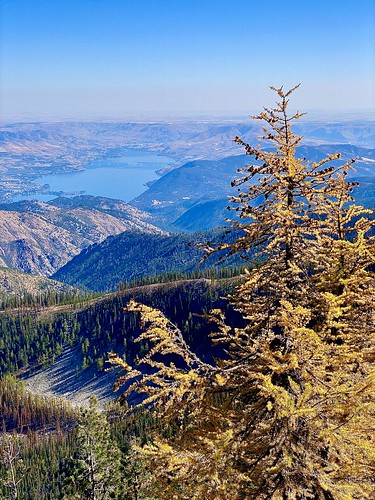 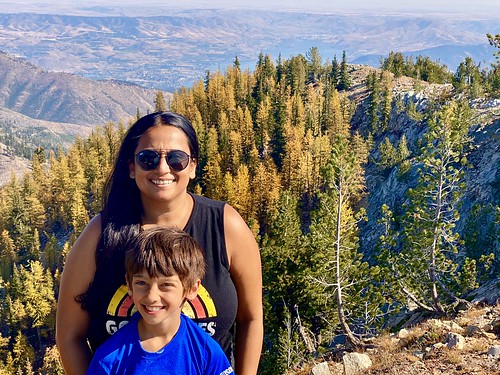 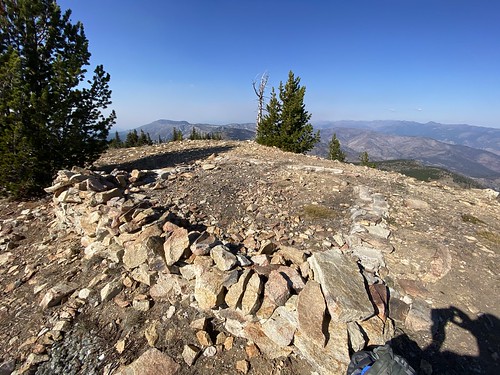 Old fire lookout on top of Stormy Mountain
We had noticed a trail coming up to the old fire lookout, and after a nice break, decided to take that back down to the Devil’s backbone trail. Once on the main trail, we retraced our steps and descended back down to the car. It seemed a little more difficult on the way down, with the dusty trail being somewhat "slippery" when it steepened. 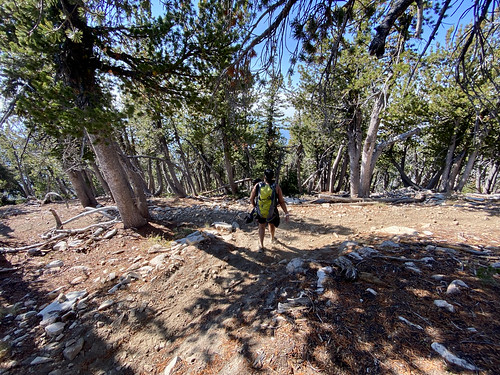 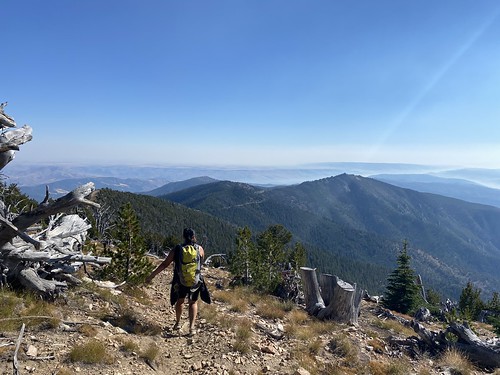 Hiking back to the car
Didn’t know what to expect, given there is limited information about the hike on the interwebs, but it turned out to be a great hike. Great views of the area and of course, we got to see some larches starting to turn. Now if only the drive on the Forest Service road wasn’t so long; but then there would probably be a lot more people on the trail ...