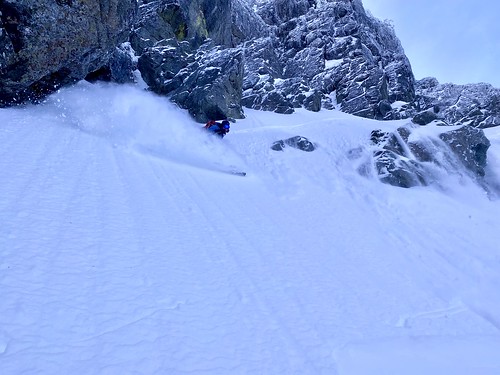 Length : 6 miles, round trip
Elevation Gain : 4200 ft.
The Slot Couloir is a very aesthetic line at higher elevations (at least for Snoqualmie Pass) with a direct approach. To put it another way, it's a great ski and one that every aspiring ski mountaineer must do, and everyone shares that opinion, because it is by far the most popular line to ski at Snoqualmie Pass. But don't let that dissuade you, as it's worth doing and even if you aren't the first to lay tracks down it, you can usually milk some good snow on the sides. And who knows, maybe you will lay down the first tracks...
From the Alpental parking lot, cross the stream/ditch and start heading up Mount Snoqualmie, keeping looker's left of the Phantom Slide path. As you break free from the trees, you will trend looker's right up the steeper slope. Ensure the snow conditions are stable, as this area is steep, and is often wind effected. Work your way up the slope, and look for the entrance to the slot on ridge around 6,000ft. Upon completing your ski, skin to the looker's right through Thunder Creek Basin and look for the exit notch.

Head East on Interstate 90 and take Exit 52. From the offramp, turn left onto WA-906/NF-9041 (Alpental Road) and continue for 1.4 miles. The parking lot will be on your left just before the bridge.

The easiest access is from the parking lot just before the bridge across the South Fork of the Snoqualmie River. However, depending on the day, the ski area may require you to park in another lot, check the Summit's uphill policy page for details.

Type : ski tour
Length : 6.4 miles, round trip
Elevation Gain : 4,430 ft.
High Point : 6,000 ft.
Download GPX View Track Only
I shot Stefan a text seeing if he had any interest waking up at the butt crack of dawn to go hit up the slot, as I had some meetings to get back too in the late morning. Surprisingly, it only took one additional follow up text to convince him to go, so we rendezvoused very early at the Mercer Island Park & Ride and then made our way up to Snoqualmie Pass.
Headlamps on, we started cruising up the skin track. It hadn’t snowed in a couple of days, which meant no breaking trail and helped ensure we kept to the tight timeline. Although there were many tracks coming down the mountain, and at the bottom, it was a little tough to distinguish the uptrack, especially in the pre-dawn light. 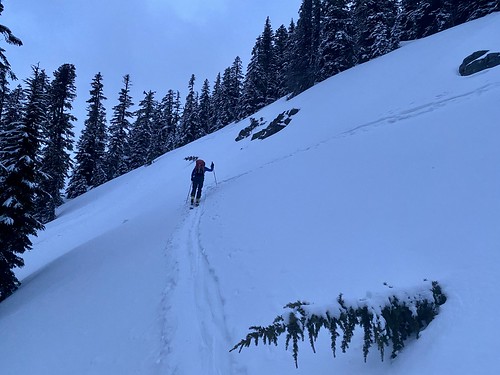 Following the skin track before dawn
As we progressed, we settled into the skin track and made good time up the mountain. A little ways past the exit notch we stopped on the side of the skin track to grab a drink and quite bite. To our surprise, we saw a person come up the skin track. It was Roger on one of his many dawn patrol slot runs. 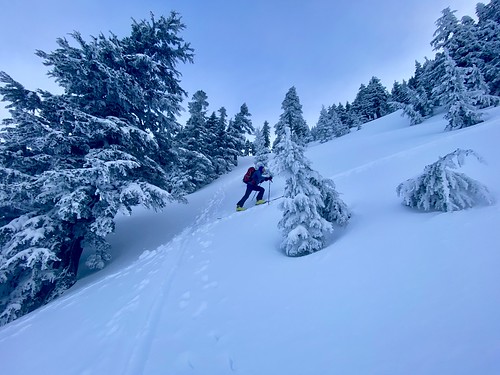 Nearing the exit notch
The snow was firm, no sign of fresh powder which was a little surprising. At one point, it became difficult to skin up a steep section, and we opted to follow bootpack for a short while before the slope mellowed and we were able to get better purchase with our skins. 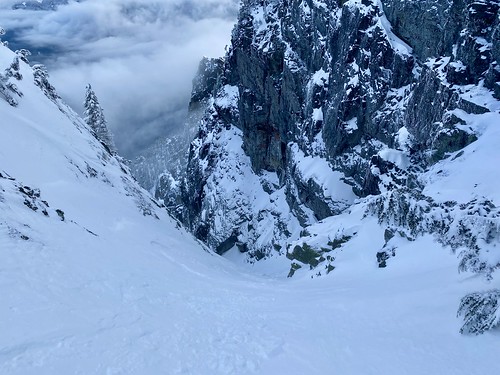 Looking down the Slot Couloir
We reached the entrance of the Slot Couloir a little before 7:45am, and had a quick chat with Roger before he descended down. We were right on schedule, and did a quick transition to downhill mode and entered the slot. The top part was completely skied off, but as we progressed down found some fresh snow on the sides of the couloir.

Stefan finding some powder in the Slot Couloir 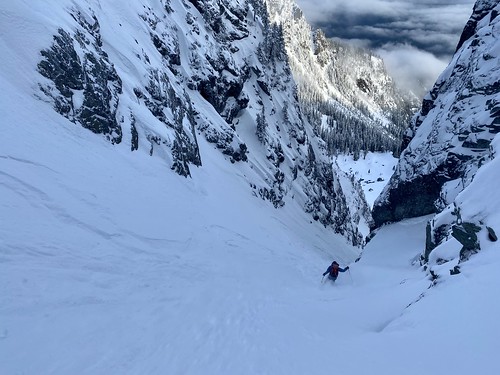 Stefan heading down the Slot Couloir
The gut of the slot was skied out, and while we were able to find some freshies on the sides, it wasn’t very consistent. After a couple of powdery turns, we seemed to run into condensed snow which didn't ski very well. Not the ski I was hoping for. I have had some good luck over the years with hitting the slot at the right time - either being able to eek out some pow on the side, or unexpectedly finding the slot unskied, but not today.
Once on the apron, I was able to avoid some debris and find more consistent snow, although it was particularly deep and again, was just ok.
We quickly transitioned at the bottom and began following the skin track up towards the exit notch. It was a nice pleasant skin up to the notch, with the sun starting to make its presence felt. 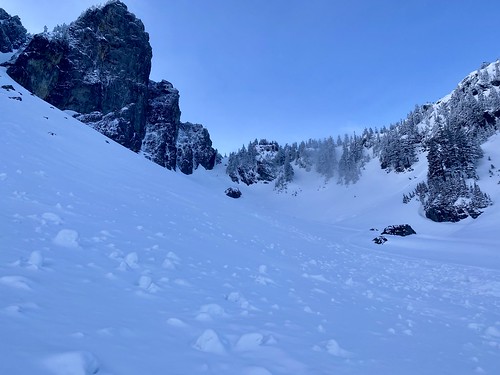 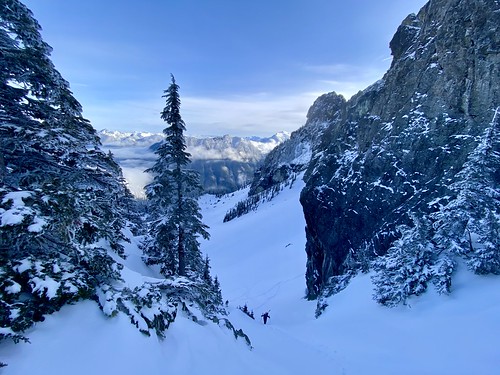 Stefan approaching the exit notch
Once over the exit notch, we were out of the shade and treated to great views of Mount Rainier and Alpental Valley. We scarfed down some food and water, and then began our ski down, not sure what to expect in terms of ski quality. 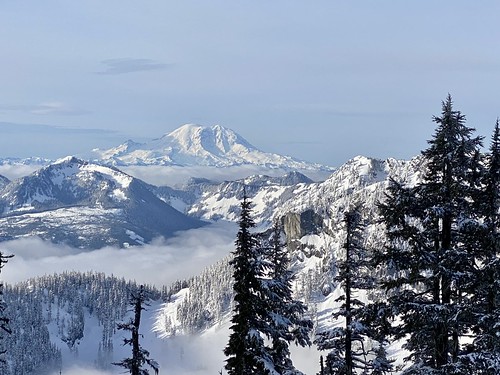 Mount Rainier
The ski down turned out to be better than expected. That’s not to say it was a great ski, but often the ski down the front side of Snoqualmie, especially once you get lower, can be absolutely horrible in the Spring - heavy, slushy snow doesn’t make for great tree skiing. However, we were early enough in the day that snow hadn’t turned to mush and we were able to link up turns and not look like absolute beginners.
While it was good to get out for a dawn patrol run on the slot, it was not the best day of skiing by any means. It’s been a tough year for me lining up quality skiing with my busy schedule, so I’ll take what I can get at this point... Also, my gpx track looks a little strange towards the top - not sure what happened, but we didn't do a quick ski before reaching the top!