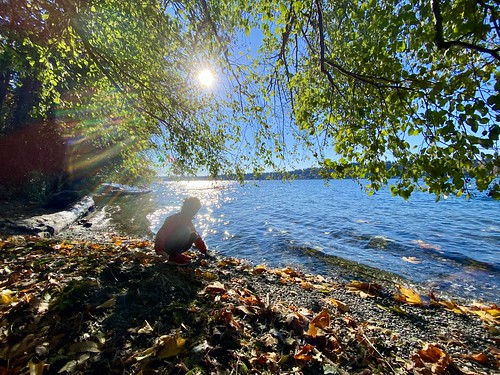 Length : 2.5 miles, loop
Elevation Gain : 400 ft.
Saint Edward State Park sits along Lake Washington in the site of a former Catholic seminary. The beautiful building has been transformed into a hotel and restaurant. The park offers a number of trail options, including the Beach Trail which provides sweeping views of Lake Washington and access to the Saint Edward Beach.

This particular loop follows the North Trail west until it reaches the shorelines and turns into the Beach Trail which runs south along the lake. Follow the Beach Trail until you reach Saint Edward Beach, at which point you have a number of different options to return back to the start, with the South Canyon Trail being a nice option (the Grotto Trail being the easiest). It will merge into the Orchard Loop trail which will take you back to the main area of the park. You will pass a playground on your walk back to the parking lot, so if with children, expect a playground break...

Driving north on 522 from Seattle, turn right onto 68th Ave NE and proceed for .5 miles. Continue onto Juanita Dr NE for 1.3 miles and turn right onto NE 145th St to enter the park.

A Discovery Pass is required to park, which costs $10 per day. There is a large parking lot with many spaces.

Type : hike
Length : 2.5 miles, loop
Elevation Gain : 400 ft.
High Point : 400 ft.
Download GPX View Track Only
After my son’s Saturday morning soccer game, it was brunch at Cedar + Elm, which is situated in an old seminary building within Saint Edward State Park. The park provides a number of trails, which I desperately needed after my fried chicken and waffles. We opted to do a loop which would take us through the forest and along the shore of Lake Washington.
It was a short walk from the restaurant through the parking lot to the trailhead. There are a number of different trails in the park, and we settled on the North Trail, as we had to head to the car to drop off our leftovers, and the trailhead was nearby. 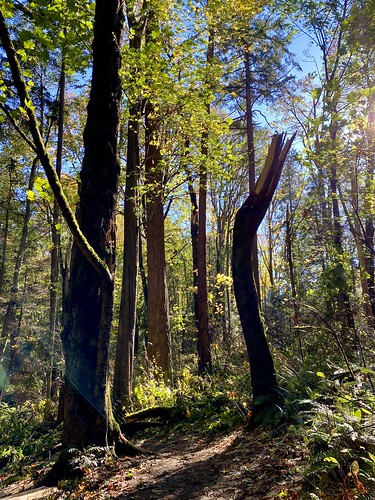 The North Trail in Saint Edward State Park
The trail descended down into a small ravine with a stream running through it, and then levelled out for a while, before descending again to the lake. There were a number of people on the trail with us, which wasn’t surprising given the beautiful fall weather we were having. The leaves had mostly turned at this point, but we still got a little color. 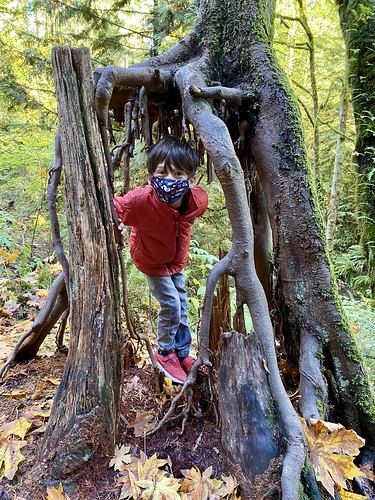 Cool tree
The trail then turned South and paralleled Lake Washington, and at this point became the Beach Trail. The Beach trail provided a number of spots to get off the trail and onto the shoreline, and we took advantage at one spot where it was easy to access the shoreline. I was surprised how warm the water still felt.

Playing on the shore of Lake Washington 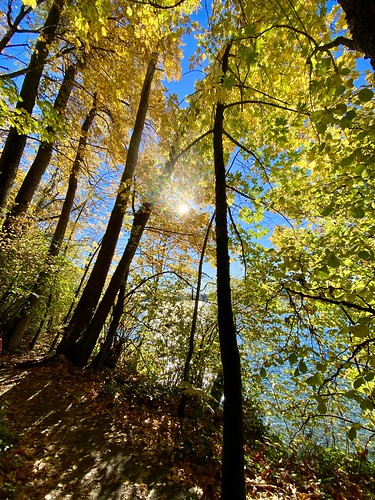 Beach Trail at Saint Edward State Park
We eventually ended up at Saint Edward Beach, and there were a number of people having lunch at picnic tables and enjoying the views of Lake Washington. I had originally planned to take the South Ridge Trail back, but opted to do the South Canyon Trail, as it was shorter and the signage indicated easier than the South Ridge Trail - they helpfully had good signage along the way that gave the difficulty of the trails. 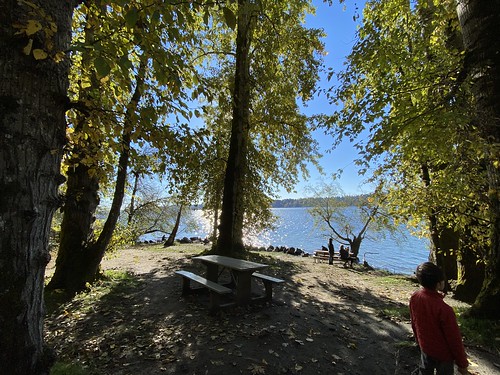 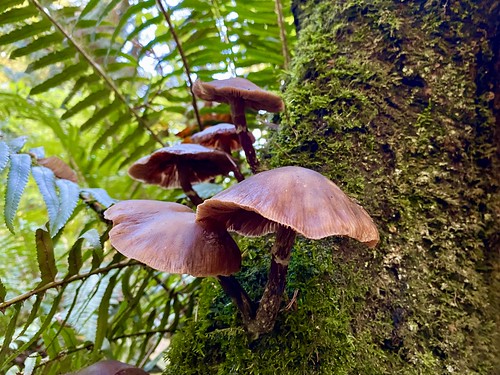 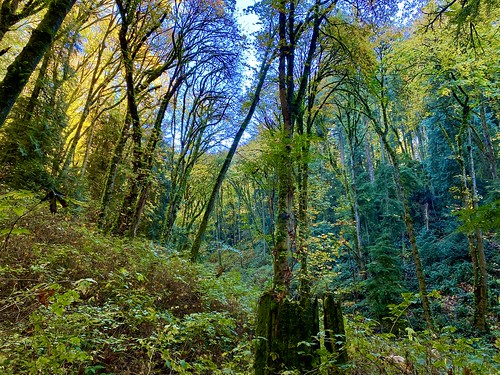 Forest view on South Canyon Trail
We followed the South Canyon trail through the forest, and encountered a number of muddy and wet spots, but were able to get by without too much issue. There are a couple of steeper sections to the trail, at least what I would consider steep for a “city” trail. We encountered a tall tree completely covered in ferns. 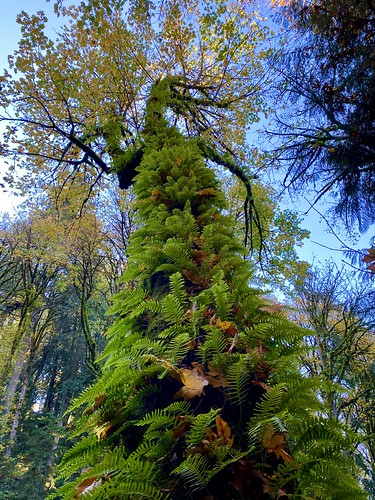 Ferns growing on a tree
The South Canyon trail merged onto the Orchard Loop Trail and levelled out, and with in no time we were at the Saint Edward State Park Playground - the highlight on the hike for my son!
Saint Edward State Park offers some great hiking close to Seattle. I always appreciate a hike that takes you through forest and along the waterfront. I will definitely be heading back to check out some of the other trails in the near future. My GPX file My Flickr Photos Trail Map Featured in Easy Hikes Near Seattle