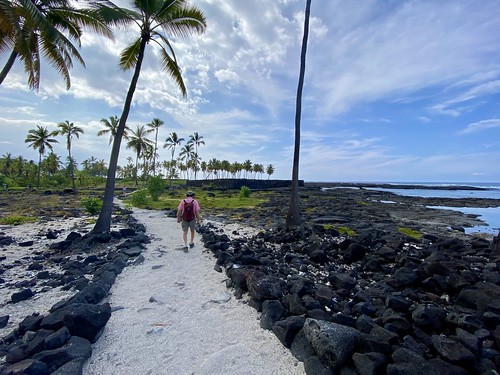 Length : 1.6 miles, loop
Elevation Gain : 40 ft.
Puʻuhonua o Hōnaunau National Historical Park is an excellent place to learn about the history of Hawaii, with numerous exhibits along a self guided half mile trail through the park. You'll have amazing views of the coast and ocean, and may even encounter a sea turtle or two along the way. Extending south out of the park is the 1871 trail, part of the Ala Kahakai National Historic Trail, which was a coastal trail allowing transportation along the coast between communities, as well as the coastal trail, which passes by some old ruins.

Take the self-guided tour in the park, and look for the Coastal Access road near the Great Wall and Heleipala Fish Ponds. Follow the road South, where it turns into the Coastal Trail (also labeled 1871 trail on certain maps) to follow the trail along the coast. The trail will eventually head inland and meet up with the 1871 trail. Take a left and return back to the main part of the park.

Driving south on HI-11/Hawaiʻi Belt Rd, turn right onto Keala O Keawe Rd and drive 3.5 miles to reach the entrance to the park.

There is a $10 fee to park within Puʻuhonua o Hōnaunau National Historical Park. There may be cars parked along Honaunau Road just outside of the park. These are people heading to swim in Honaunau Bay, and not an indication the park is full.

Type : hike
Length : 1.8 miles, loop
Elevation Gain : 40 ft.
High Point : 200 ft.
Download GPX View Track Only
Seeing there was another National Historic Park south of Kona, we decided to load up the car and make the 30 minute drive to the Park, where we planned to take in the sights around the visitor center and then do a short hike on a couple of the trails. My six year old son was ambivalent about another park with a hike, but I told him this was a place he would learn about warriors and he agreed to come. We saw a number of cars waiting to enter the park and a large number of cars parked outside the entrance, so we decided to park there, as I thought people were waiting for parking spots. Unlike the visit to the previous Historical Park, Kaloko-Honokohau, this park charged a $10 fee and people were just waiting to pay. All the parking outside the park entrance was for the Two Step Beach.
After passing through the visitor center, we walked around the Royal Grounds. They have a number of interesting exhibits and information. Even though there wasn’t much about warriors, my son still enjoyed looking at the statues and hearing about the history of the place. As we walked by Keone’ele Cove, we spotted a Sea Turtle resting on the sands. They sure seem to like National Historic Parks (we saw one a couple at Kaloko-Honokohau)! 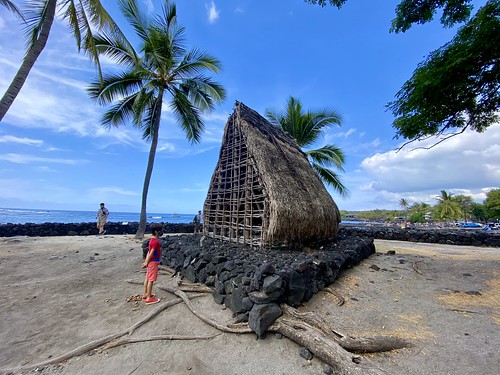 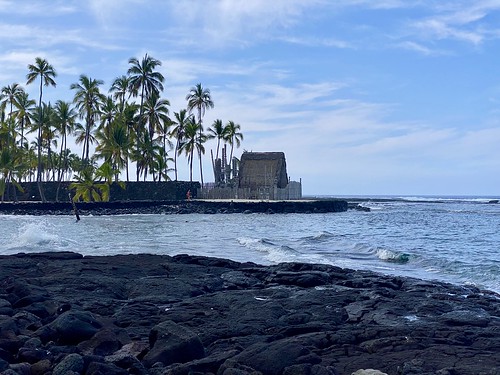 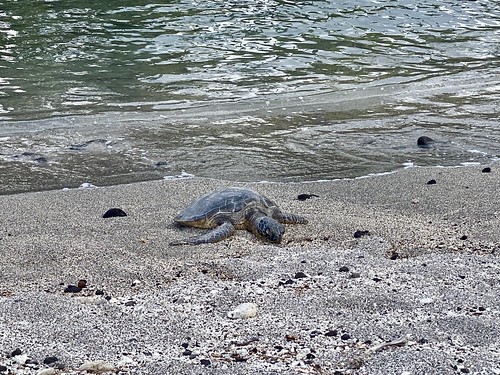 Obligatory sea turtle photo
We then passed by the Great Wall and into Pu’uhonua. It was interesting to learn about the kapu, or sacred laws, and how this place was used as a place of refuge when breaking said sacred laws. After strolling around, we made our way back through the Great Wall and onto the Coastal Access Road. 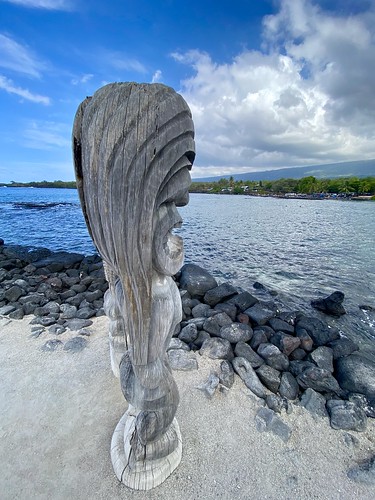 Statue in the place of refuge

Grandpa walking a trail in the place of refuge 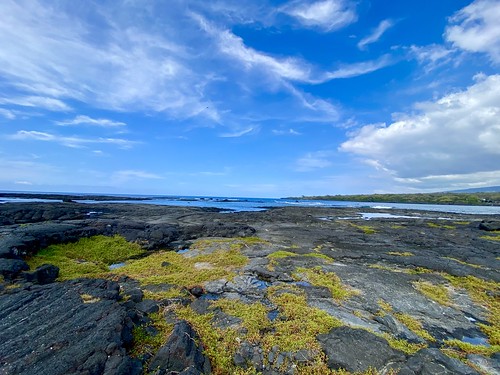 View out to the ocean 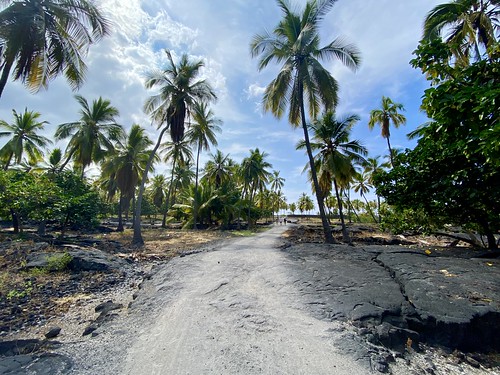 Coastal Access Road
We continued down the Coastal Access Road past the picnic area where a number of groups were enjoying food and the views. The road then ends, and we began hiking on the 1871 trail, so named as it was rebuilt from an old coastal trail to allow horse traffic in 1871. It was a nice easy walk along the 1871 trail, and we spotted a couple of mongoose - they seem to be everywhere, as they were introduced to Hawaii to combat the rat population, but apparently are better at decimating the local bird population. 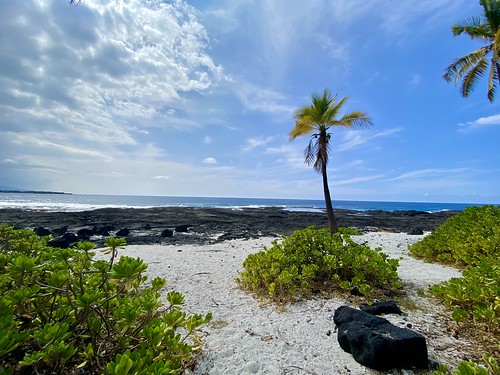 Beach near the picnic area 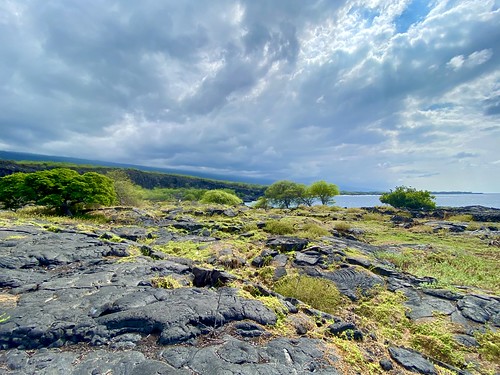 View of Alahaka Bay from the 1871 Trail
The trail eventually heads inland, and we reached a junction and headed left, back towards the visitor center and our car. On the way back to the car, we saw a lot of goats along the trail, munching on shrubs and sitting in the shade. 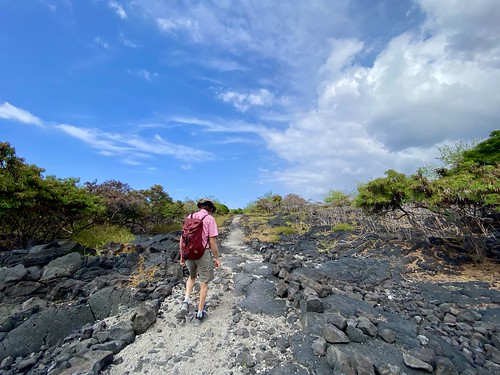 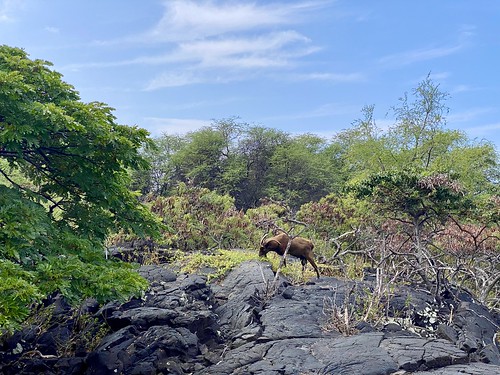 Goat along the 1871 Trail
The park was great, and it was nice to be able to get a short hike in afterwards. Highly reccomend checking this out!