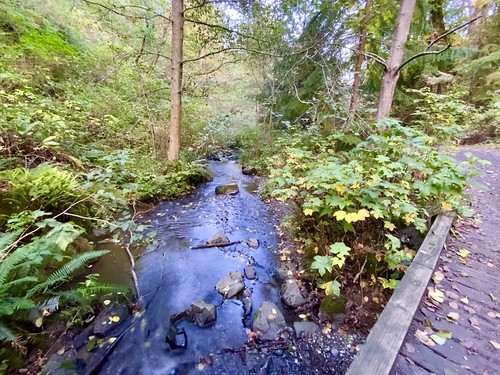 Length : 3 miles, roundtrip
Elevation Gain : 300 ft.
Piper's Creek trail in Carkeek Park will take you through classic Pacific Northwest forest, meadows with an old orchards, across creeks, through a wetland teaming with water fowl and finally deposit you at near the shoreline of the Puget Sound, where you have the option of using a pedestrian bridge to cross the train tracks and explore the beach. And all this magic happens in a 3 mile hike within the city of Seattle.

The hike can be started at either end of the trail, but many prefer to start at the Eddie McAbee entrance of Carkeek Park off of 6th Ave NW. The gravel trail will descend down toward Piper's Creek, and then follow the Creek for a little under a mile, passing through Piper's Orchard along the way. The gravel will give way to pavement, at which point you will pass through grass fields within the park and reach the end of the Piper's Creek trail. It is highly recommended to continue along the Wetlands trail and then cross over the train tracks to the beach before retracing your steps back to the start.

The Eddie McAbee entrance of Carkeek Park has a very small parking lot, which is often filled up. However street parking is available along NW 100th Place. Neither spots require fees or permits. There is also parking at the other end of Piper's Creek within Carkeek Park, however this can fill up on good weather weekends and holidays.

Type : hike
Length : 3 miles, roundtrip
Elevation Gain : 300 ft.
High Point : 340 ft.
Download GPX View Track Only
Fresh hop beer flowing and overtime in a close Seahawks Sunday night football meant Monday came a little too soon, and I decided I needed to get out during lunch and walk off the excesses of the previous night. What better way than a stroll down Pipers Creek Trail, relatively close to home, and a combination of forest and water, both the creek and the Sound. The tiny parking lot was full, but fortunately, there was plenty of street parking available. 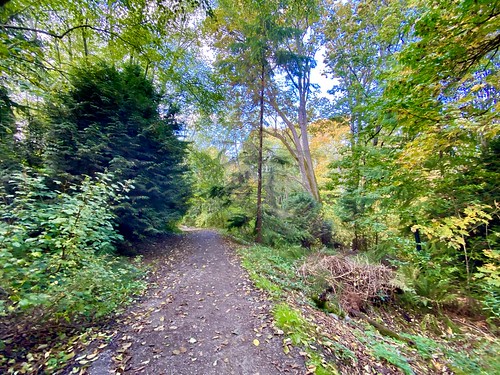 The start of Pipers Creek Trail 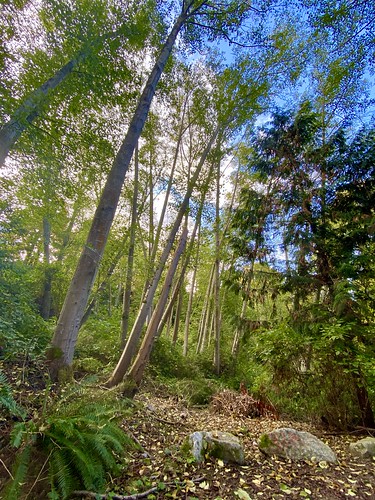 Pipers Creek Trail
The trail starts with a descent into Carkeek Park, and then quickly levels out and begins following Pipers Creek. The Creek had a good flow to it, and all the city sounds were drowned out by the rushing water. I only encountered a couple of people on the first section of the trail, and it certainly gave me the wilderness feel that can be hard to find in city trails.

One of the many bridges crossing Pipers Creek
I eventually passed through Piper’s Orchard, the oldest orchard in Seattle. It was planted in the late 1800’s as part of the Piper Family Homestead, and eventually became overgrown. It was re-discovered and a group of volunteers cleared the area and help maintain the orchard in conjunction with Seattle Parks. There are over 50 fruit and nut trees, with many types of heirloom Apple trees. 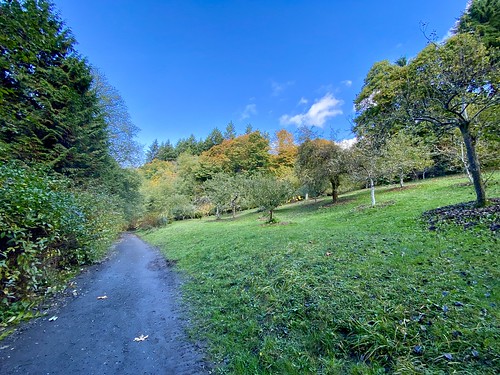 Piper's Orchard in Carkeek Park
Farther along the trail there is a brief section of pavement as the trail contours past a series of containment pools and buildings. There is a sign along the trail letting people know that the buildings are not a fish hatchery, but rather a water treatment plant that deals with sewer overflows - sewers that hold both storm water and raw sewage. While the first part of the trail gives you a wilderness feel, it is in a city, and this is a reminder that the waste we produce needs to be dealt with somehow. 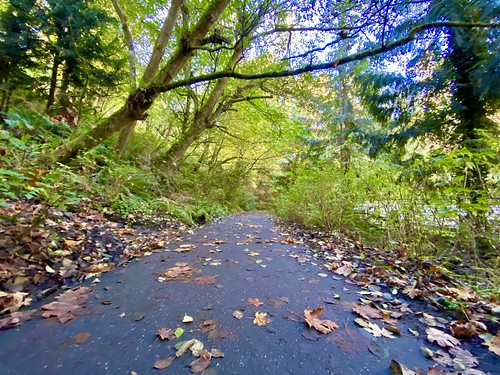 Pavement near the water treatment plant 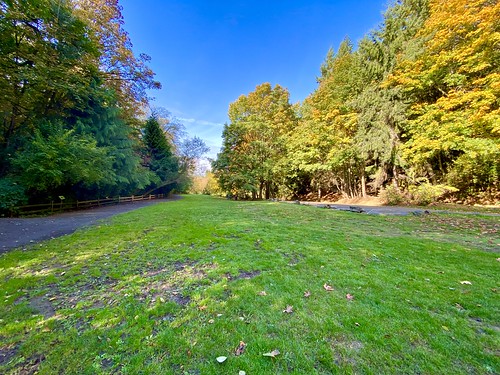 Carkeek Park
After passing through a nice open lawn area of Carkeek Park, I continued back into the woods. I was a bit unsure if I was actually on Pipers Creek Trail, or had ventured onto the Wetlands Trail. Regardless, both trails headed towards the Sound. There was an elevated platform which took me through the Wetlands and eventually deposited me next to the train tracks. 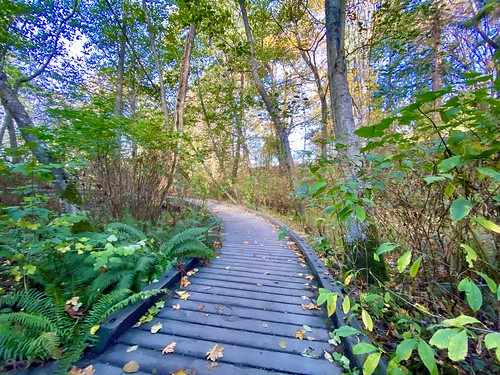 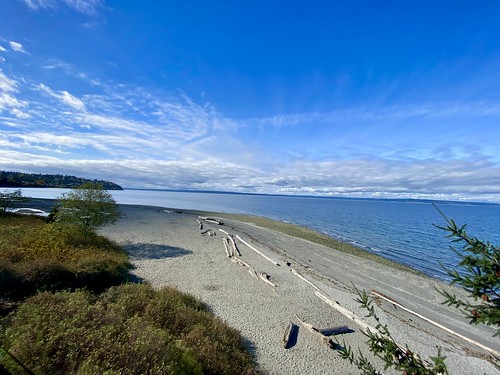 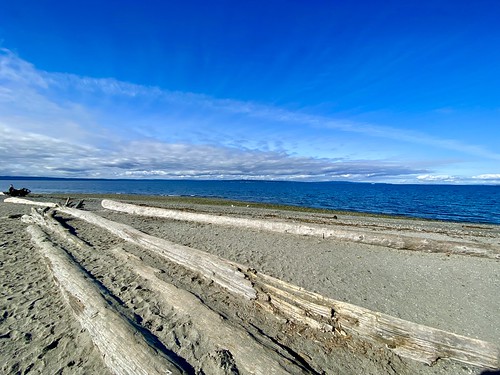 Ejoying views of Puget Sound
I used the pedestrian bridge to cross over the train tracks (note : this is a great place to take kids to watch trains go by, as they pass directly beneath you), and head down to the beach area. I walked a small distance South along the shore and came to where Pipers Creek drains out into the Sound. It was cool to be able to follow the Creek through the woods, into the wetlands and out to its final destination, the Puget Sound. 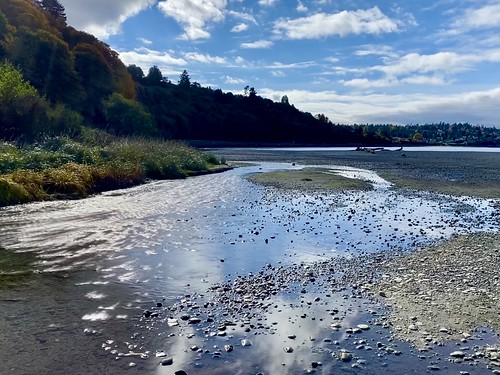 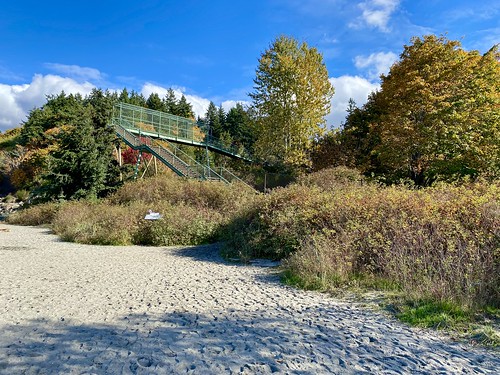 Pedetrian bridge to cross the train tracks
On the way back I tried to take an alternate trail, but ended up at a dead-end. So it was back through the Wetlands and onto Pipers Creek Trail. I only encountered one person after going through the lawn area. 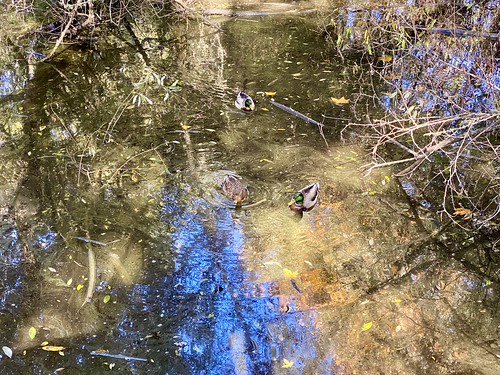 Ducks in the Carkeek Wetlands 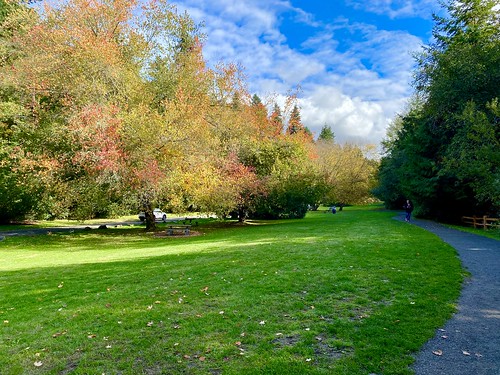 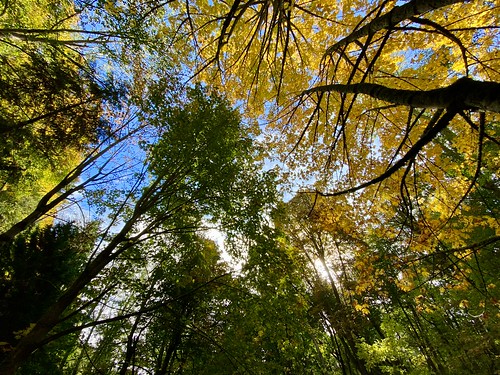 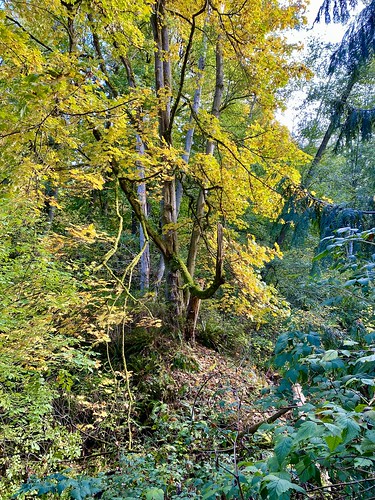 Forest along Pipers Creek Trail in Carkeek Park
A great hike through a Seattle Park - it's amazing to follow Pipers Creek out to the Puget Sound.