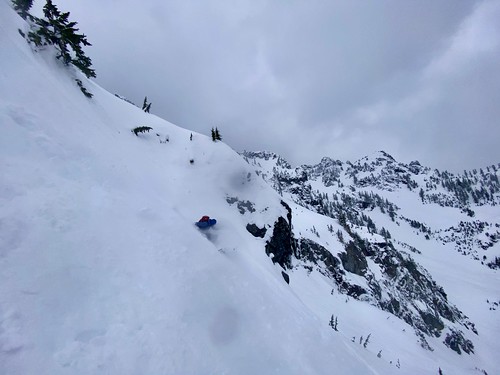 Length : 7 miles, round trip
Elevation Gain : 3000 ft.
When you reach the North Shoulder of Chair Peak and look down on the slopes below for the first time, it is striking. Not because it's super steep or amazing terrain, it just looks different than a lot of the terrain around the pass, more akin to a glacier with the gentle undulating slopes. But those slopes end in a cliff band above Snow Lake (Cache Couloir and a couple other routes not withstanding), so most folks opt for a short skin along the ridge towards the NE Buttress of Chair, where you will be deposited above a moderate couloir / gully which provides nice turns straight down to Snow Lake.

The approach takes you past Source Lake and up to Snow Lake Divide - make sure to follow the appropriate uptrack, which is below the exit track for backcountry skiing at Alpental. At Snow Lake Divide you will head left and climb up into Chair Peak Basin. Once higher up in the basin, there are a couple of options to attain the ridge on your right. The most common approach goes up the first notch you see, which is right after passing by Thumbtack, a large rock protruding up from the snow. Once on the ridge, you can ski directly down to access Cache Couloir down to Snow Lake, however as mentioned above, most folks will skin along the ridge towards Chair Peak, and ski this aspect. It is a nice wide slope with moderate pitch, although it's not uncommon to have it filled with avalanche debris. At the bottom, skin across Snow Lake, skin up to the Divide and then retrace your steps back to the car.

In an ideal world, you will park in the upper Alpental Lot, however that will depend on a number of factors, such as : is the ski area open, is it a weekend, are you a season passholder? Check The Summit's uphill policy to figure out the appropriate location to park.

Type : hike
Length : 10.1 miles, roundtrip
Elevation Gain : 4,740 ft.
High Point : 5,880 ft.
Download GPX View Track Only
Stefan and I discussed our options on the drive up, and decided to go for Armchair Couloir. We had only skied it once before in 2017 (apparently were the first to ski it), and conditions seemed to be lining up for a second go around - snow depth had built up over the last month and we were hoping the line would still be holding good snow.
As we followed the cat track up Alpental Valley, I realized this was my first ski tour in Alpental Valley this year. I had to think about it; surely that couldn’t be true this late in the year? Sadly it was : a combination of not getting out a lot this year, and just skiing other parts of the Pass.
We progressed onto the skin track and meandered up through the Alpental backcountry, passing a waterfall below mushroom couloir, a reminder that it was Spring despite the cooler temps and new snow. 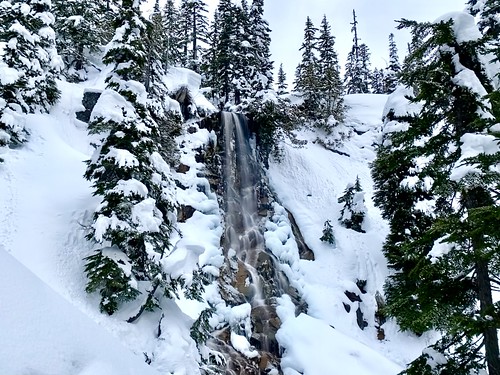 Waterfall in Alpental Valley
It was smooth sailing up past Source Lake. The snow was obviously sun effected, however on the skin up the valley we had seen some preserved snow in the shade, and we hoped that higher up Northern and shaded aspects would hold the goods.
We broke off from the Snow Lake skin track, following another track up into Chair Peak Basin. We lost the uptrack at one point, and had to break trail for a bit, but found the track again at the start of the Basin. It was easy skinning up past Thumbtack, and we opted to skin up to the ridge, despite the bootpack already in place for the final section. 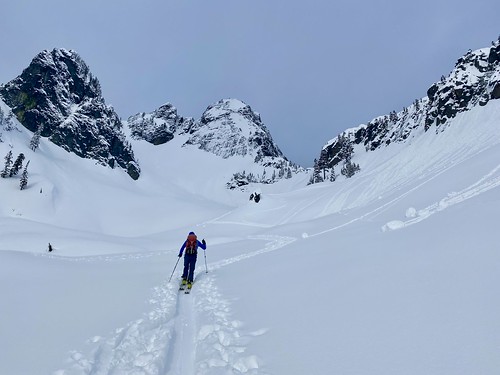 Skinning up towards Chair Peak
Reaching the ridge, we saw a group of two begin their descent down towards Cache Couloir. I have often encountered wind slab on these very aspects in the past, but we found stable snow conditions as we cut in a traverse paralleling the ridge. In fact, the snow conditions were excellent and we had a quick conversation about proceeding to Armchair Couloir - should we just lap the pristine powder, or put in a little extra work and go for Armchair? We ultimately settled on Armchair... 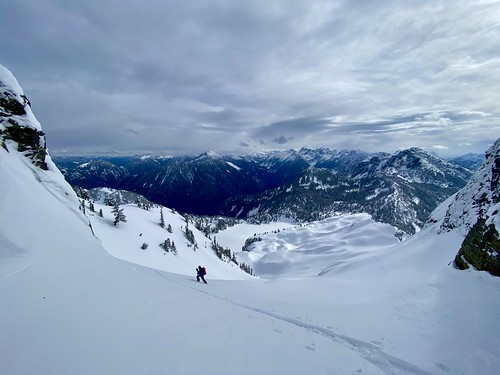 Stefan skinning up to the Northern Ridge of Chair Peak
Approaching the Northern Ridge of Chair, I couldn’t remember exactly where the entrance to Armchair was. I opted to head looker’s left of a rock spire and once Stefan reached me, he also admitted he couldn’t remember either. We knew we were close, so we slowly progressed down the other side, and had to cut over skiers right to get into the start of the descent. Mental note, go right of the rock spire!
We skied down the apron towards the couloir and the snow was not great - it was very sun effected and had slid in a number of places. Reaching the top of the Armchair, my hopes of a ski were dashed. There were a number of rocks visible at the entrance, and it looked like all the fresh snow from days prior had slid already. It was an easy decision to bail, given we knew there was great snow a little ways back. 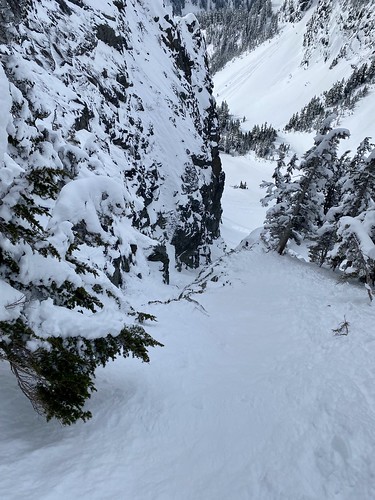 Entrance to the Armchair Couloir
We took off our skis and boot-packed up to the ridge. We could see a steady stream of folks following part of our traverse and then breaking off to ski down to Snow Lake. No one had followed us all the way to the ridge, so we had fresh canvas to lay down some pow turns. Farther down the run, the snow quality deteriorated and it was a mix of crusty snow and avalanche debris. 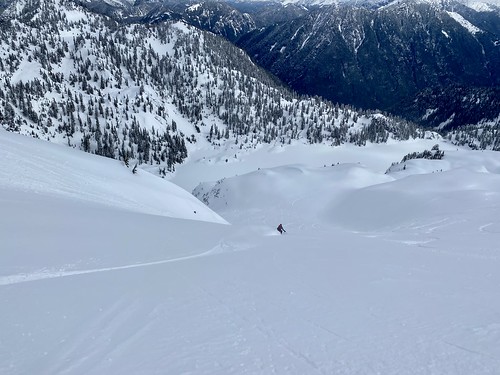 Stefan skiing down from the Northern Ridge of Chair 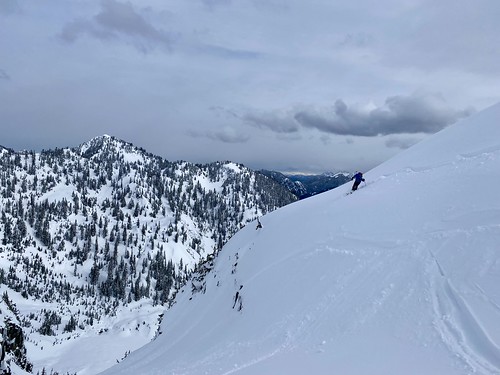 Stefan skiing through the crusty snow
We opted to stop a ways above Snow Lake and cut in a new skin track to get back to the good powder. There were a number of groups both on the skin track above us, as well as skiing down, so we decided to cut over skier’s right and see if we could lay a track back up without being directly in the line of everyone skiing down.
We were able to find a way through some steeper terrain, and eventually reached our traverse skin track and followed it over a ways before transitioning to ski mode. By now, at least 30 people had skied the slope! But it was big enough that we were easily able to find fresh pow. Before we hit all the avalanche debris, we skied to the right, and skied a fresh line. We were able to find some decent snow and enjoyed the ski down to Snow Lake. 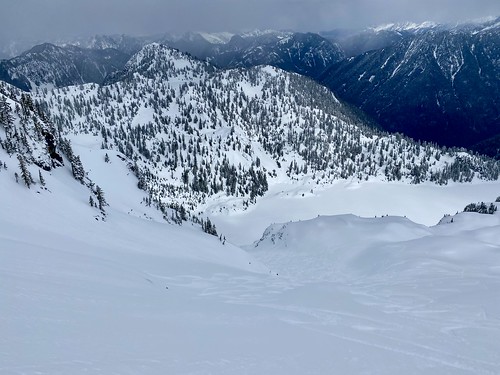 Looking down at our second lap

Stefan fnding some freshies on our second lap
Skins back on, we made our way across Snow Lake and then had a halfway decent ski down to Source Lake before following the skin track back out to the car.
Unfortunately, we didn't get to ski Armchair Couloir, but at least got some good turns off the North Shoulder of Chair Peak. I was amazed by the number of people skiing that same route, but it is a relatively easy get for North facing terrain. My GPX file My photos on Flickr