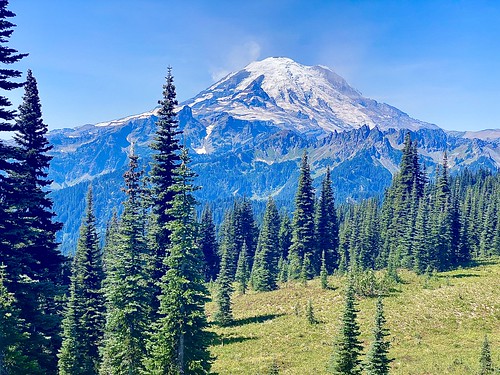 Length : 3.2 miles, round trip
Elevation Gain : 600 ft.
Naches Peak Loop is a great hike with outstanding views of Mount Rainier and will take you through a variety of mountain environs including forest, meadows, and lakes. You will hike on the Pacific Crest Trail, and cross into Mount Rainier National Park. Clocking in at 3.2 miles and 600 feet of elevation gain, this makes a great family hike. While I wouldn't call it easy, it's doable for younger children and there is enough variety on the hike with stops at lakes and views of Mount Rainier to keep children engaged.

To maximize views of Mount Rainier, I recommend hiking the loop clockwise. Starting at Tipsoo Lake, you will start gaining elevation and upon reaching Chinook Pass, use a cool wooden bridge to get across Highway 410 and connect with the Pacific Crest Trail. The trail traverses the north side of Naches Peak, passing a tarn along the way. As you start to loop around Naches Peak, you will get views of Dewey Lake below, and eventually reach another tarn that makes a perfect spot for lunch. Continuing along the east flank of Naches Peak, you will get splendid views of Mount Rainier before descending down past Little Tipsoo Lake and black to the car.

Drive east on Chinook Pass Highway / State Route 410 and a half mile before Chinook Pass, you will find the Tipsoo Lake parking area on your left

It's free to park at the Tipsoo Lake parking lot, however it can get very crowded on popular days. There is also parking available at Chinook Pass Overlook Trailhead, and that requires a Northwest Forest Pass.

Type : hike
Length : 9.3 miles
Elevation Gain : 3,000 ft.
High Point : 5,960 ft.
Download GPX View Track Only
My wife and I decided we needed to get out and hike more often as a family and after a discussion on how our son had never been to Mount Rainier National Park (crazy, considering he has been to National Parks in a couple other states), I took a look for hikes around Mount Rainier. The Naches Peak Loop trail checked all the boxes : reasonable 3 mile hike, not a crazy amount of elevation gain, part of it is in the National Park and great views of Mount Rainier.
Pulled into the parking lot around 10:45am and were able to find a parking spot without issue. A quick consult of the trail map, and we were off, passing by Tipsoo Lake and opting to head clockwise in order to maximize views of Mount Rainier. The trail quickly started climbing and ten minutes later we were crossing a cool wooden bridge taking us over Chinook Pass on Highway 410. 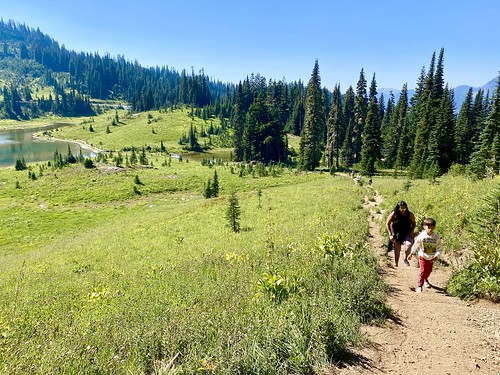 Climbing the trail from Tipsoo Lake 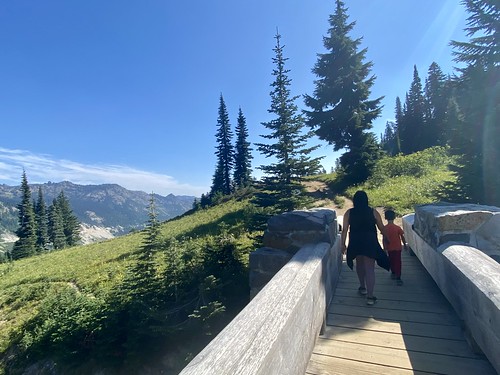 Wooden bridge over Chinook Pass on Highway 410
We followed the trail around the North side of Naches Peak, and I eyed the various ski runs I have done off Naches peak. Many years ago, as soon as Chinook Pass was plowed and open by the Department of Transportation I would venture over with my friend Tim to ski Naches Peak as well as some of the surrounding ridges. But this was my first time on Naches Peak without skis on my feet. 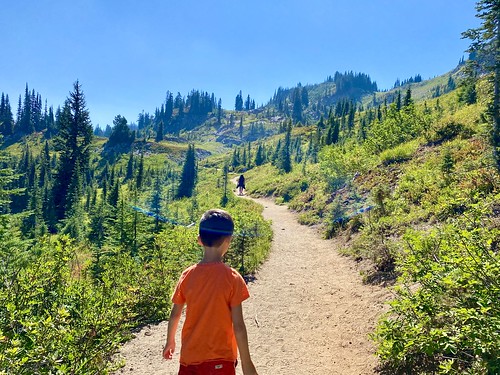 My son walking along the North side of Naches Peak
We passed a good number of people doing the trail counter clockwise. Most were on day hikes like ourselves, but a couple of folks had larger overnight packs and likely we doing part or all the the Pacific Crest Trail (PCT) - this part of the hike had merged into the PCT. We took a quick break next to a small unnamed lake and munched some food, getting the necessary energy to power up the rest of the Pacific Crest Trail towards the ridge. 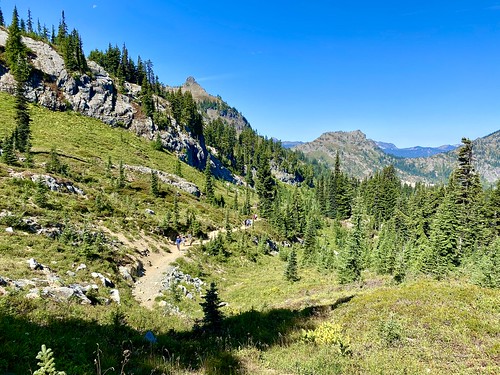 Hiking along the Naches Peak Loop Trail
Throughout our hike, my son had been inquiring on when we would get to see Mount Rainier. After cresting the ridge, we were finally treated to the view, and it didn’t disappoint. My son was excited to see Mount Rainier looming off in the distance, and while the glaciers looked a little thin this year due to the heat wave in June, it was still an impressive sight. 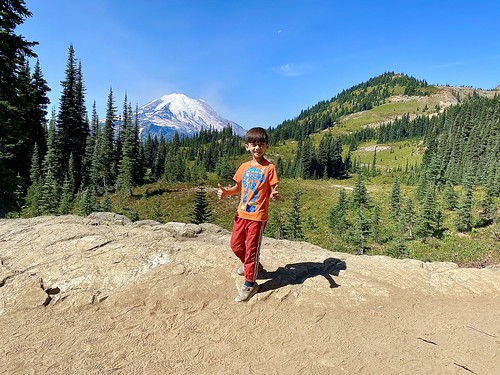 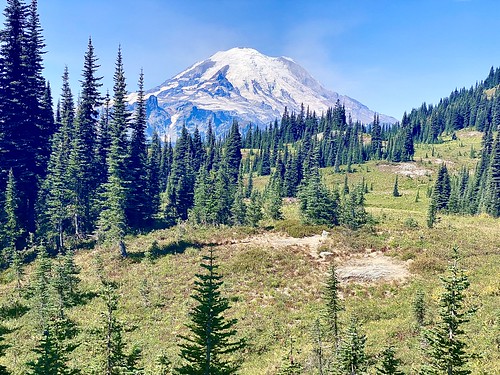 Beautiful Mount Rainier
We continued on and decided to stop for our lunch break at two small lakes along the side of the trail. It was a popular place to take a break, with four or five additional groups also stopping for a rest. We had hoped to find a spot to rest with a great view of Rainier, but the trees obscured the view and we could only see the top part of Mount Rainier. 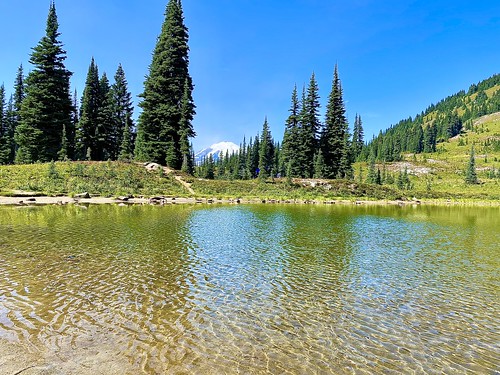 Obscured views of Mount Rainier at our lunch stop
Continuing the hike after lunch, we saw Dewey Lake and noticed a strange cloud on the horizon behind the lake - I think it was a smoke plume from the Schneider Springs fire. Fortunately, it was to the East of us, and we didn’t notice any haze in the air on the hike. Farther along the trail we encountered the best views of Mount Rainier, and my wife was disappointed we had stopped for lunch earlier - this would have been the perfect place to eat lunch and stare of Mount Rainier.

Mount Rainier in all its majesty 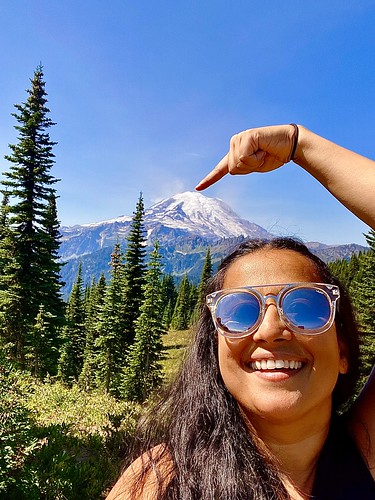 Obligatory selfie with Mount Rainier
Enjoying consistent views of Mount Rainier as we continued hiking along the south side of Naches Peak, we also spotted Mount Adams way off in the distance. After descending the trail down to Highway 410, we decided to take a quick side trip over to Little Tipsoo lake, which I found to be prettier than Tipsoo Lake. We then followed the trail past Tipsoo Lake, rather than taking the more direct approach to the car along Highway 410, and were all smiles once we got back to the car. The hardest part of the hike was convincing my son to use the pit toilet again before heading out. On the grand scheme of things, the pit toilet wasn’t that bad - he’s just never used one before and the smell got to him... 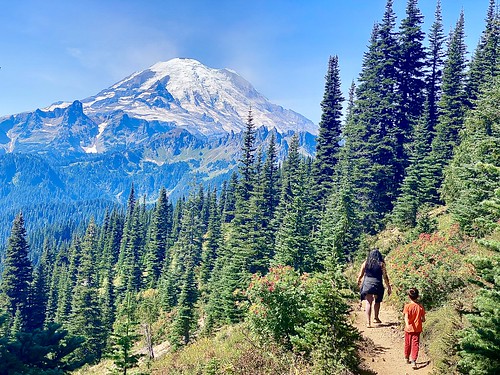 Mount Rainier from South side of Naches Peak 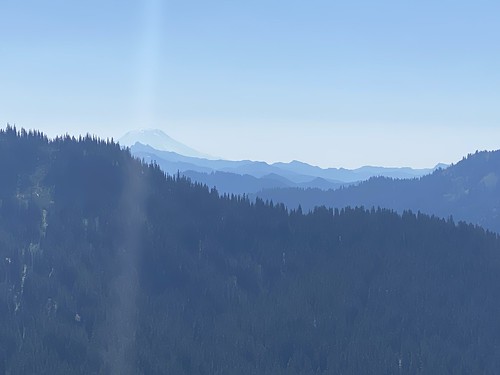 Mount Adams off in the distance
All in all, it was a great hike and the views of Mount Rainier didn’t disappoint. We clocked in 3.86 miles and 712ft of elevation gain with our side trips included and I would highly recommend this hike! Washington Trails Association Hiking Guide My photos on Flickr My GPS track