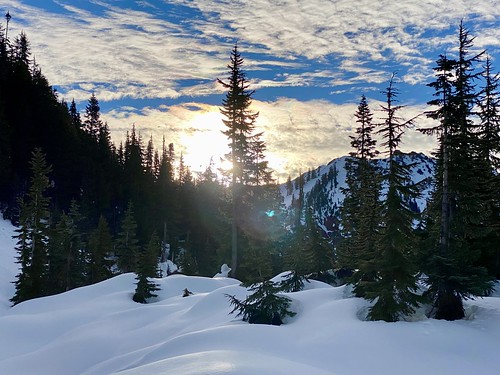 Length : 9 miles, round trip
Elevation Gain : 3000 ft.
Looking up the Commonwealth Basin from the Summit West base area on a sunny day, you will see the top part of Lundin Peak's south facing couloir. The couloir starts with a good pitch; nothing that will get your heart pounding, but enough to make it a fun ski. As you descend the pitch lessens a little, but still provides around 1,200 vertical feet. It's a great spring ski, given it corns up well with the southern exposure, and relatively high elevation for Snoqualmie Pass, with the majority of the ski above 5,000ft.

Follow the Pacific Crest Summer Trail up into the Commonwealth Basin. You can use the log crossing to get on the looker's left side of Commonwealth Creek and proceed up the valley, keeping in the flatter terrain with Guye Peak and Cave Ridge to your left. It's also possible to continue up the valley on the right side of the Creek, just make sure not to get sucked into Red Mountain or the Kendall Katwalk area. Proceed between Cave Ridge and Red Mountain and skin directly up the couloir. Retrace your steps to exit out of the valley.

As of the 2022/2023 season, you can park for free in the Summit West base area lot W3, which is immediately on your right as you enter the Summit West Base Area. Please review The Summit's uphill travel policy for the most up to date information on where to park, as it may change in the future.

Type : ski tour
Length : 9.3 miles
Elevation Gain : 3,000 ft.
High Point : 5,960 ft.
Download GPX View Track Only
I hadn’t been out for a ski tour in a couple of weeks as I waited for storms to roll in with some fresh snow. However the storms never materialized and I decided I needed to get a quick ski tour in as I had plans later in the day to watch the super bowl with family and friends. I settled on either Red Mountain or Lundin Peak - wasn’t sure which, but they were both in the same general direction, so I could decide at the last moment.
It was quick skinning up what had now become a highway of a skin and snowshoe track - no fresh snow in awhile, sunny skies and lots of people. However, I was early enough that said people weren’t around yet. There were a couple of cars in the Summit West parking lot with folks getting ready for their tours, and I passed a group of two on my way up, but otherwise had the Commonwealth for myself. 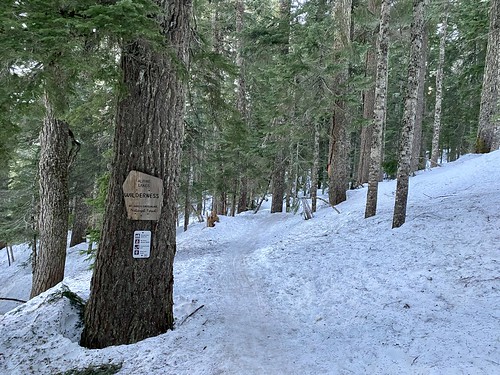 Entering the Alpine Lakes Wilderness
As I neared the log crossing of the Commonwealth Creek, I decided to keep on trucking on the current skin path rather than attempt the treacherous skin down to the log. It was still early enough in the morning with clear skies, and the snow was rock solid. I guess I could have taken off my skins and booted down the 20 feet to the log, but that just seemed like too much work. 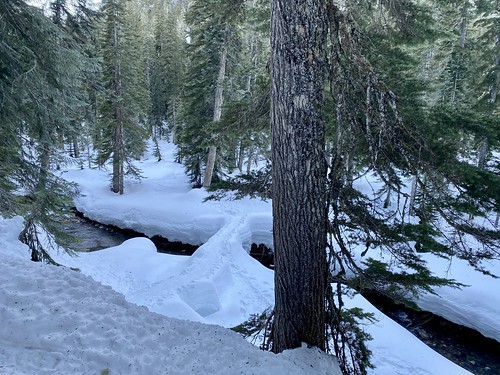 Log crossing of Commonwealth Creek
The track I was following up the valley started meandering all over the place, likely put in by a drunken snowshoer on a midnight outing, so I abandoned the track and kept on the straight and narrow. The firm snow made for quick skinning, no breaking trail for me today.
I caught some glimpses of Red Mountain through the trees. I have been wanting to ski the Southern face of Red, and on the drive up I had thought it could be a possibility for today. Unfortunately, it looked really bony, with lots of exposed rock, and I quickly ruled that out.
I hit the spine with the summer trail to Red a little higher than I was hoping. I sometimes approach Red that way, but it’s not the easiest skin when the snow is super firm, so I decided to go over towards Lundin and make the call when I passed by the chute that leads to Red - it was filled with enough debris to make it an easy decision to proceed onto Lundin. 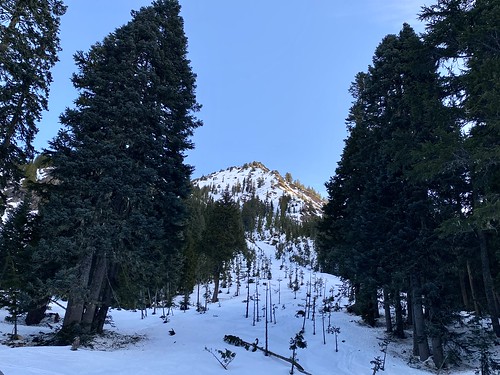 Looking up at Red Mountain
The skin up to the start of Lundin’s couloir was straightforward. There was a small section of trees that was skied out and very icy, but otherwise the nice open slopes made for quick skinning as long as I avoided the icy downtracks. 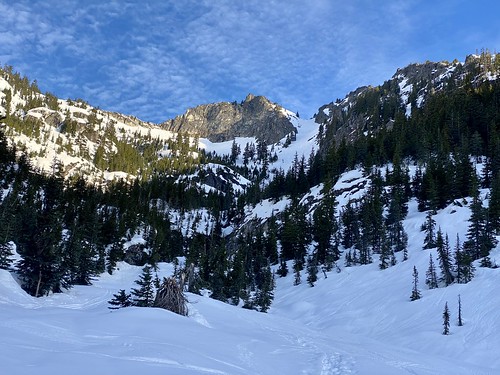 Skinning up towards Lundin
Reaching the bench at the bottom of the couloir, I found a spot in the sun and took my first break. It was a beautiful day, and the sun provided some nice warmth as it came out from behind some wispy clouds. 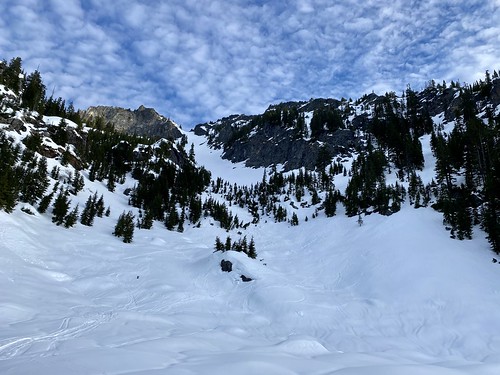 Beautiful day in the mountains
I decided to throw on my ski crampons, and later appreciated the decision as I made my way up the slope and encountered steep icy terrain. Towards the top the sun was starting to warm the edges of the couloir, but in the center it was icy with occasional chunks of avy debris cluttering the way. I almost thought about booting it, but I carefully pressed on and made it to the top and took a nice long break, enjoying the views and sun. I could now see a couple of groups making their way up.
I took a look down the North side, but didn’t even consider it given how firm everything was (my GPS track looks like I do go down the North side, but I didn’t..). After 15 minutes, it felt like the snow was softening up enough that I could begin my descent. There was one group in the bottom of the couloir, and once they moved away from where I was planning on skiing, I took off. 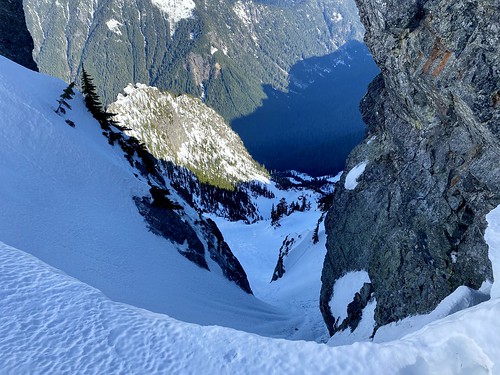 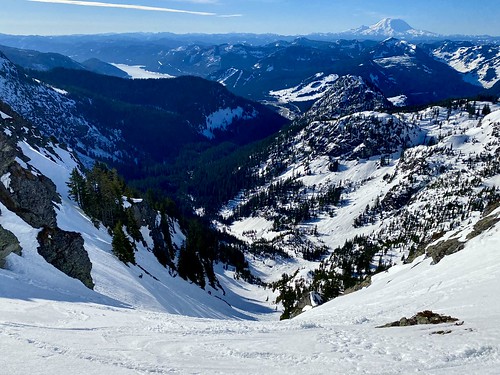 Looking down my ski run
I took a look down the North side, but didn’t even consider it given how firm everything was (my GPS track looks like I do go down the North side, but I didn’t..). After 15 minutes, it felt like the snow was softening up enough that I could begin my descent. There was one group in the bottom of the couloir, and once they moved away from where I was planning on skiing, I took off. It was pretty good on the very side of the couloir, where the sun had been hitting for awhile. But as soon as I ventured into the center it became very firm.
Eventually I decided to ski over to another slop, both to get on an aspect that had consistent soft snow, and to avoid skiing down on a couple of groups that were now coming up the couloir. I made my way down to the bottom of the run, passing a couple more groups along the way, then had a quick exit - the one benefit of skiing early was the snow was still hard and fast in the valley.
A good short early morning solo tour. I found some old photos from 2007 when I did a solo tour up Lundin in similar conditions. I'm pretty sure I have been up there more recently, but can't find any photos... My GPX file My photos on Flickr