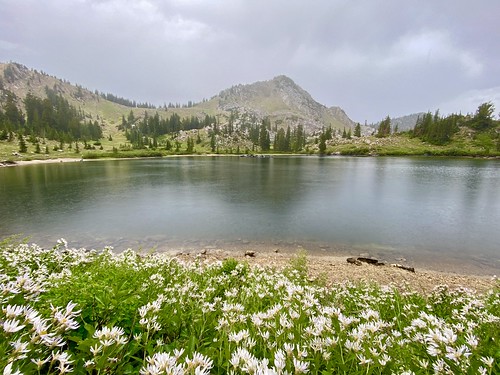 Length : 4 miles, roundtrip
Elevation Gain : 1200 ft.
Lake Catherine is one of the more popular lakes in the Big Cottonwood Canyon and can be accessed either from Big or Little Cottonwood Canyon. This hike focuses on the approach from Albion basin at Alta in Little Cottonwood Canyon. The trail steadily ascends up the mountain, providing views of the Alta Ski Area and surrounding peaks. You will pass through meadows, filled with wildflowers during the late summer, before climbing up to reach Catherine’s Pass. It’s a quick, albeit steep, hike down to Lake Catherine, and it’s recommended to hike around the lake to capture its beauty from all angles.

The trail is multi-use with both hikes and mountain bikers and it’s in a protected watershed area, so no dogs or swimming allowed.

Drive UT-210 E/Little Cottonwood Rd/Little Cottonwood Canyon Rd to the Alta Ski Resort. If parking in the free lot, just before the toll booth, take a right onto East Day Lodge Road to access the parking lot. If continuing onto the Catherine Pass Trailhead, proceed to the toll booth ($10 access fee) and then proceed on Albion Basin Road for 1.9 miles, and the parking lot will be on your right.

There is a small parking area at the Catherine Pass Trailhead via Albion Basin Road. Access to the parking lot requires a $10 fee, paid at the Alta Toll Booth. This is a popular hike, and the parking lot may fill up early so arrive early. There may be a long line to get through the toll booth as well.

It’s also possible to park for free in a large parking lot below the toll booth; however, it's 1.9 miles from the toll booth to the Catherine Pass Trailhead, so this will add close to 4 miles and 500 feet of elevation gain to your trip.

Type : hike
Length : 4.4 miles, roundtrip
Elevation Gain : 1,240 ft.
High Point : 10,230 ft.
Download GPX View Track Only
I was unsure if this hike was going to happen. We were attending a friend’s wedding at Alta Lodge and my wife, the matron of honor, had to arrive at 11am to get ready, while the activities for the rest of us didn’t start until 4pm. Certainly more than enough time to do the hike, but it was raining on the way up and I was unsure if there would be parking available at the trailhead; adding 4 miles to the hike would make it a little too rushed.
After quickly checking in and getting situated in the room, I looked outside to see the rain had stopped and there were even some breaks in the cloud. I decided to go for it, and drove up to the toll booth, where the attendant told me there was lots of parking available. A short drive up the first road and I was on my way to Catherine Pass. 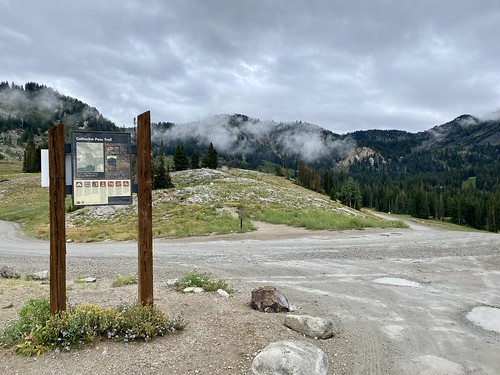 Catherine Pass Trailhead
The hike winds its way through the ski area, with a sign warning about not handling the leftover explosives from avalanche control with a handy set of pictures helping people identify what they look like - hopefully this sign wasn’t put up as a result of someone picking up and detonating an explosive... 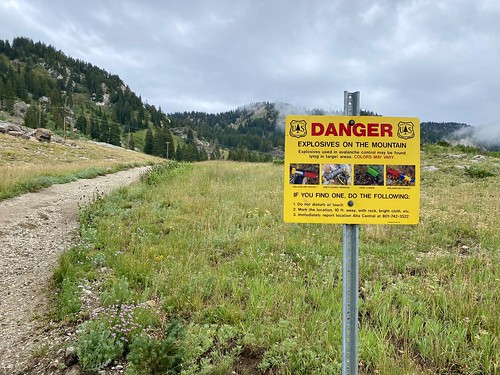 Warning sign
I soon left the ski area infrastructure behind, as I climbed up the trail through some light forest and eventually into a meadowy area. I was pleasantly surprised to see the wildflowers were still in bloom, with a variety of colors speckling the green grass. I’m not sure if this is normal, but Utah was greener than I expected at this time of year - I recall visiting my parents in July a couple of seasons past, and it was much drier. 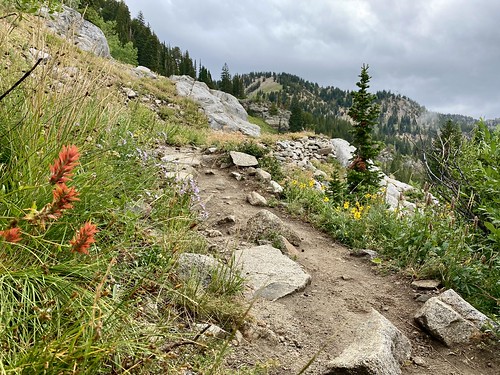 Wildflowers in bloom on the Catherine Pass Trail 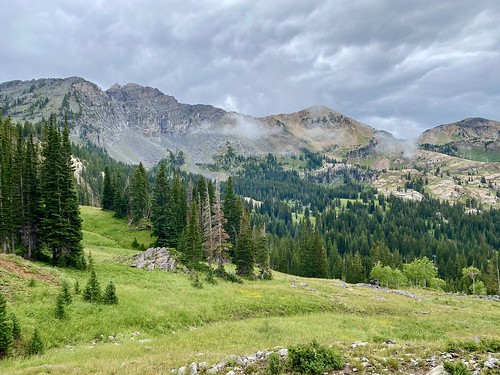 Views from the Catherine Pass Trail
The trail proceeded to ascend up the mountain again, and as I began hiking up I was startled by a loud noise. To my surprise a mountain biker came barreling down the steep and rocky trail and flew by me. I’m glad I didn’t meet him in a blind corner, because I'm pretty sure I would have taken the worst of the collision.
The trail leveled out into a bench with a lush meadow replete with wildflowers. I spotted a group of three a ways in front of me, the first folks I had seen on the trail, at least hiking. The one benefit of the iffy weather was lack of people. 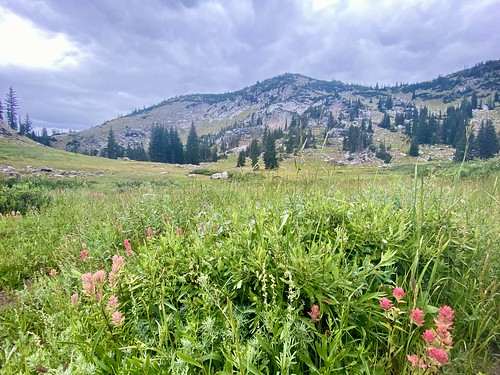 Meadow on the Catherine Pass Trail
After a nice break walking the flat meadow, the trail headed up again towards Catherine Pass. The trail was nice, it never got too steep and had some flat sections. I figured I would be out of breath given the elevation was much higher than I am used to, but with a slow and steady pace, I didn’t have any issues. I soon reached the ridge and caught my first views of Lake Catherine.
I proceed to follow the trail down to Lake Catherine. It wasn’t overly steep, but definitely had more of an incline than the previous section. There were a couple of groups around the lake, including one gentleman fly fishing. I wasn’t sure the best spot to break off the trail and get closer to the lake, so I continued following the group of three in front of me. However, they kept going down past the lake, so I found a side trail and made it over to the lake. 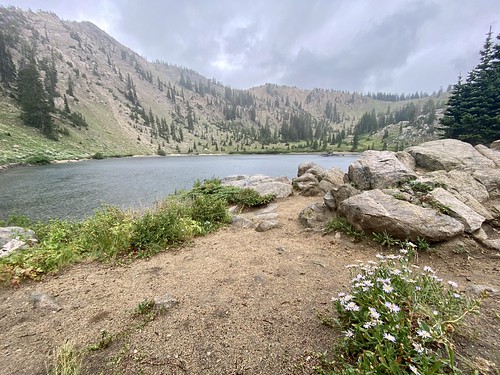 Reaching Lake Catherine's shoreline
As soon as I reached Lake Catherine, it started to rain. Not a hard rain, but a consistent drizzle; I felt right at home, like I was in the Northwest again! I threw on my light rain jacket and decided to find a large tree to shelter under while I hydrated and had a quick snack. I didn’t stay stationary for very long, as the cool temps and dampness were starting to set in. I proceeded to hike around the lake, and enjoy the cloud filled views of the basin.

Lake Catherine
I followed a trail up past the lake and the trail seemed to dead end at a camping area in a forest section. I was able to find another faint trail and continued up the mountain, but that too came to an end. Now I was a ways above the lake, and decided to traverse over to the main trail rather than hike back down to the lake and pick up the trail there.
I finally connected into the main trail, hiked up to Catherine’s Pass and briefly entertained the idea of taking one of the other trails up the ridge towards the Sunset Peak. I probably could have squeezed it in, but the visibility sub par, and I was looking forward to getting back to the warm hotel room for a late lunch. 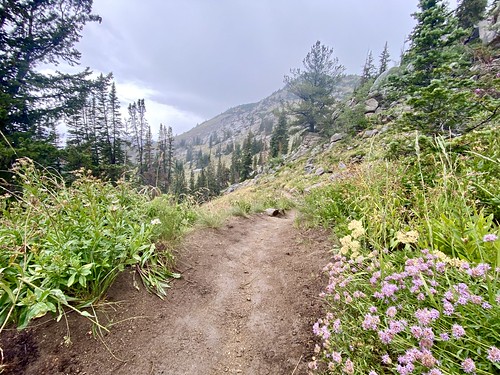 Beginning the descent down from Catherine's Pass
It was a quick hike back down to the car, enjoying the views of Albion Basin and the wildflowers. I only passed two other groups on the way down, and then it was back to the lodge for a nice hot shower and lunch. 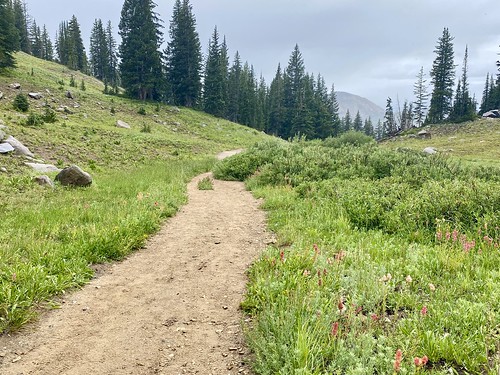 Hiking down Catherine's Pass Trail
A great short hike around Alta, highly recommended. Would be nice to have a little more time and continue on some of the trails that intersect with Catherine’s Pass.