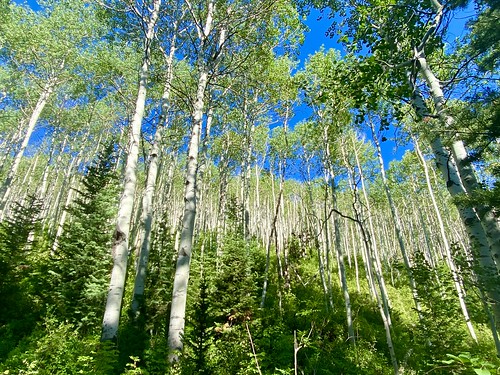 Length : 5.7 miles, roundtrip
Elevation Gain : 1900 ft.
Iron Mountain is a 9,018 foot peak that lies within Park City Mountain Resort, within what used to be the Canyons Ski Resort. It is a moderately challenging hike that requires a little route finding, as you will be ascending multiple trails throughout the hike, including an unsigned trail to the Summit. The hike will take you through aspen groves and the ski area, providing great views of the Park City area.

The trailhead is not very well marked, and starts off on private land bypassing houses. It’s unclear if this access will be permitted going forward, so venture forth at your own risk. After a short distance you will come into a clearing, before going back into the forest, and eventually connecting with the Mid Mountain Trail. After a short distance you will veer off onto the Iron Man trail which will then deposit you onto a dirt road (cat track in the winter). Proceed up the road and look for a cairn and trail on your right after roughly 10 minutes of hiking - if you reach the ski lift, you have gone too far. This trail will take you to the summit of Iron Mountain.

There is no parking right at the trailhead in the cul de sac, as indicated by the numerous no parking signs. You will find very limited parking (and by limited, I mean roughly 4 cars) a short walk away on the side of Iron Canyon Court.

Type : hike
Length : 5.9 miles, roundtrip
Elevation Gain : 1,900 ft.
High Point : 8,990 ft.
Download GPX View Track Only
I discovered the Iron Mountain trail in years past while researching places to ski tour around Park City - it had looked like a potential approach to the Monitor Bowl - but had never gotten around to exploring the area until now.
Following Google Map directions, I pulled into a cul de sac which had no parking signs plastered everywhere, and there was a police car sitting there. I had seen a couple of cars parked on the side just before the cul de sac in between no parking signs, and so I turned around and found a spot a little bit down the road.
I double checked the map to confirm I was in the right location, and walked up the road. I couldn’t see any indication of a trailhead, and was now doubting whether this was a legitimate trail. I walked by the police car, ready to answer questions about what the heck I was doing here, and noticed a very faint trail next to a construction company sign.
I hesitantly started on the trail, and encountered a paper notice which mentioned that this trail crosses private property, and new construction was in progress. I thought the sign was peculiar, because it didn’t say I couldn’t go on the trail - it was almost like a passive aggressive attempt to get me to not take the trail?
The trail quickly came out into an open field and then eventually entered into the trees again. It was somewhat rocky, but easy to follow as it progressed up the mountain, eventually passing through some Aspen stands. 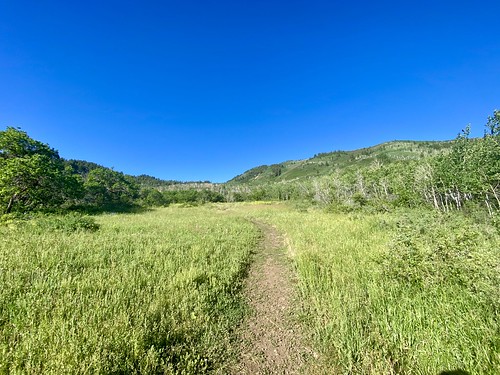 Open area at the start of the hike 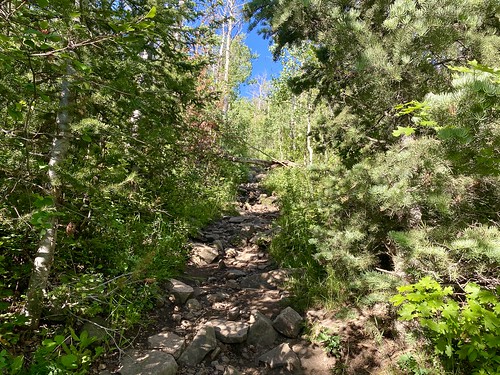 Hiking through the forest 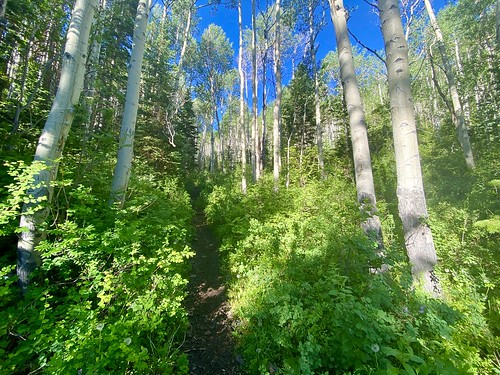 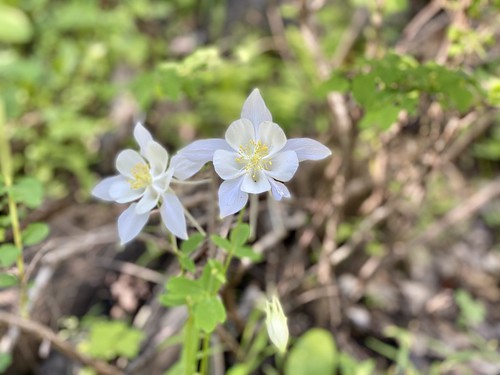 Wildflower along Iron Mountain Trail
As I came close to the ridge, there was a split in the trail, and there was a large branch laid across the trail to the right. Thinking it was an indication not to take that route, I went to the left and upon reaching the ridge encountered a bench with a nice view of the valley. I followed a faint trail along the ridge until it disappeared. Consulting the map, I realized the trail was below me, and I bushwhacked down until I reached the main trail again. 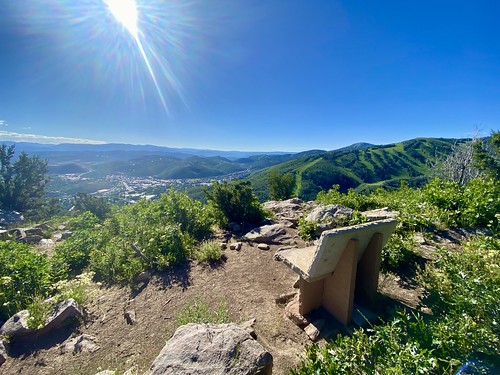 Bench off the Iron Mountain Trail
The trail eventually merged with the Mid Mountain trail. Apparently the trail used to continue upwards, however there is a large sign indicating it is private property and trespassing is not allowed. So I hiked along the Mid Mountain trail for a short while, and then reached a junction with the Iron Man trail. While there was a map next to the junction, I was a little confused, as I didn’t realize I needed to go up the Iron Man trail and the map by the trailside didn’t show the route up to the top of Iron Mountain. 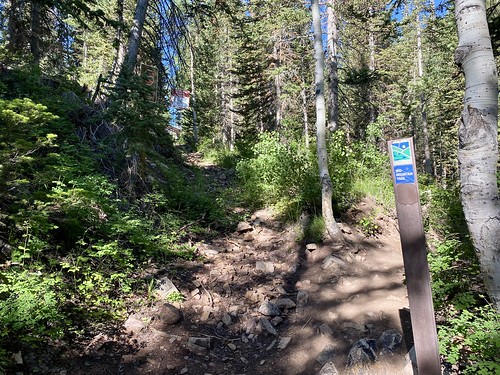 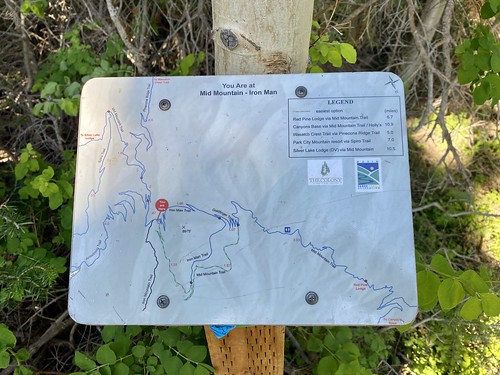 Junction of Mid Mountain and Iron Man Trails
I figured out I needed to take the Iron Man Trial, and set off. It steadily progressed up the side of Iron Mountain, with a couple of long switchbacks. I was treated to views of some pretty amazing houses, one of which had an elevated driveway which is probably more expensive than my entire house! 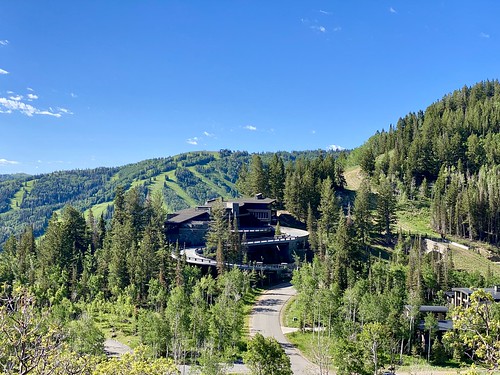 That driveway is more expensive than my house
The trail merged with a dirt road, which also doubled as a ski run in the winter. I knew the trail branched off the road somewhere up ahead to the right, but I somehow missed it, and ended up walking up to the Iron Mountain Express ski lift. Consulting the map, I realized I was far off from the trail, and set out through the woods. It only took about 5 minutes to locate the trail. 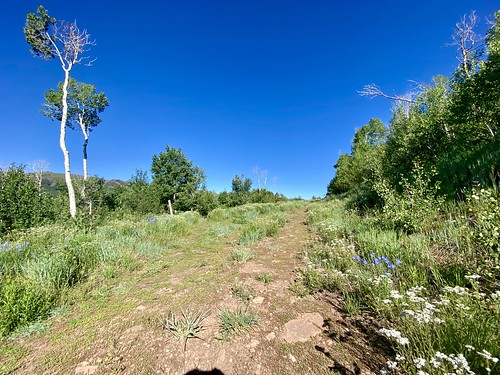 Walking along the road 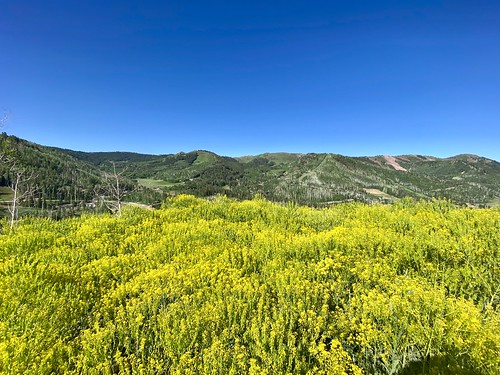 Some sort of flowering plant 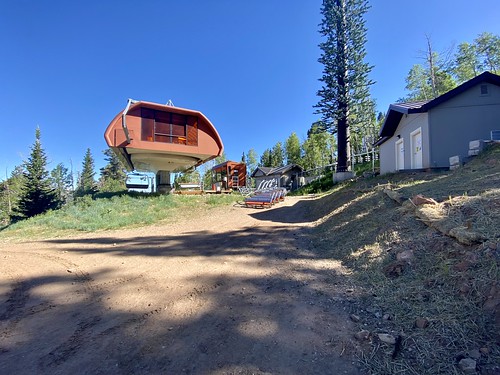 Top of Iron Mountian Express ski lift
From there it was a relatively short hike up to the top, but the trail was fairly steep and at this high of elevation I proceeded slowly. The top itself was rounded and nondescript, and I found a place to sit, eat and hydrate. 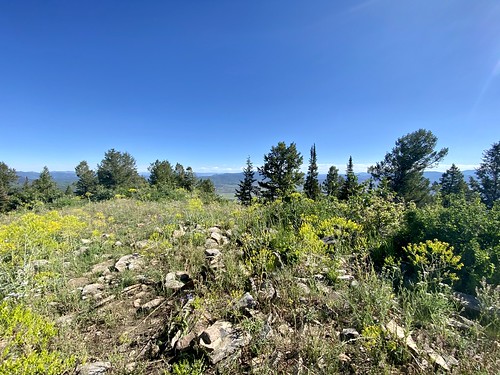 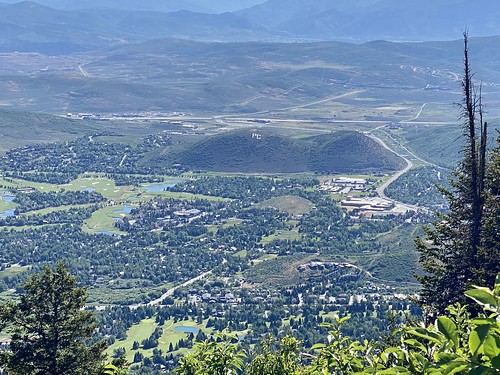 View of Park City
I then walked down the trail and hit the road. While it’s not incredibly obvious where the trail leaves the road, there was a small cairn and I’m not sure how I missed it… The hike back down was straight forward, and I ran into 4 different groups going down. I hadn’t come across a single person on my way up. 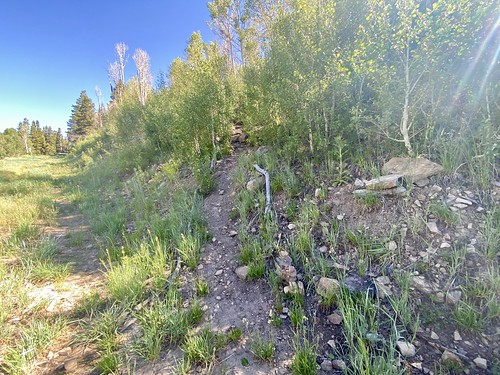 Where trail intersects with the road, not sure how I missed it! 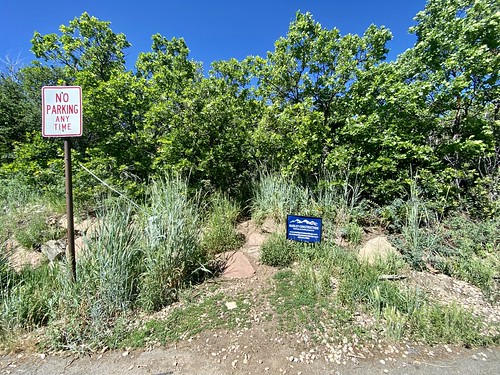 Looking back at the "trail head"
It was a bit of a confusing hike for me, given some of the info I had read was outdated, and there are a number of different trails you have to take, some of which are not well marked. But it was good to get out, the views were decent, and I was ultimately able to figure out how to get to the top.