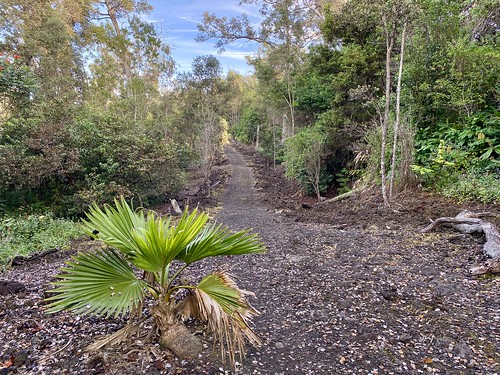 Length : 3.8 miles, loop
Elevation Gain : 730 ft.
Honua'ula Forest Reserve is a lush cloud forest on the slopes of the Hualālai volcano. Sitting at 3,000 feet, it is drastically different from the much drier Kona area below, and you will find ferns, flowers and tree canopy throughout the area; because of this, there are no views down the mountain of the ocean.

There are a series of trails laid out in a grid, which can be combined to form loops of varying lengths. While the trails are in good shape, there are many roots and rocks along most trails and they can be slippery, so caution is advised. The sign at the entrance encourages you to take a picture, which is a good idea - trails junctions can be a little hard to spot with all the vegetation and are typically denoted by rock cairns, but don't have trail signs. Having a photo of the area can help guide you.

Parking is generally relatively easy to come by at the end of Makahi Street, as this area typically doesn't see a ton of visitors. There is private property bordering the area, and it is well signed where not to park...

Type : hike
Length : 3.8 miles, loop
Elevation Gain : 730 ft.
High Point : 3,150 ft.
Download GPX View Track Only
After a family hike to see the sea turtles at Kaloko Honokohau Historical Park, it was time to head up the mountain to higher elevation for a solo hike through the forest. It wasn’t a particularly strenuous hike, however I wanted to do about 4 miles, and parts of the trail had a lot of roots, which I suspect might have significantly slowed down my 6 year old son. You'll find my other Kona hikes here.
It’s quite obvious where to park along the road - just avoid the signs telling you not to park or trespass or you will be shot, and you should be fine… There is a map at the start of the trail, and it is handy to take a photo. The trail system is in a grid and there are only a handful of trails, but given the warnings about not trespassing, it was nice to reference the map a couple of times as I hiked. 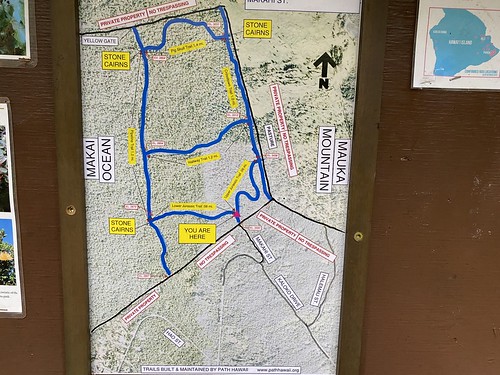 Map at the start of the trail
I decided to head down Lower Jurassic and then take the Pipeline Trail, that way I would finish the hike with the uphill out of the way. While the Lower Jurassic trail was covered in lots of tree roots, it was well maintained and easy to follow as I descended through the lush forest. Based on some of the reviews I saw online, I figured I would see lots of tropical flowers, but it was a while before I caught sight of any. 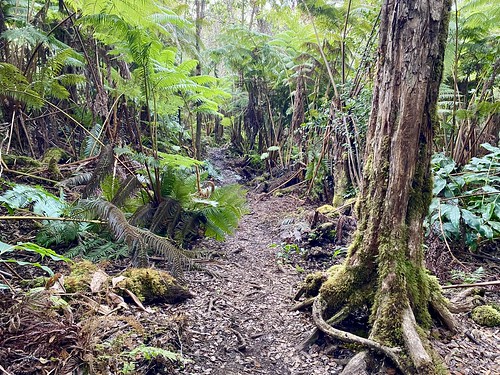 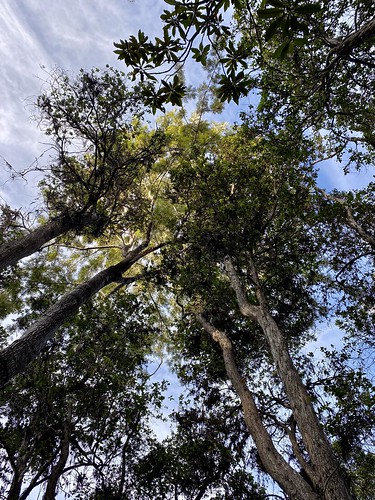 Tree canopy opening up farther along the trail 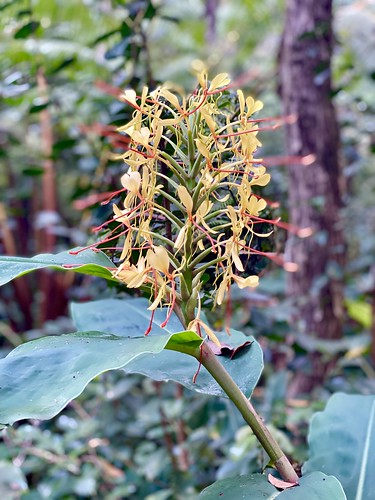 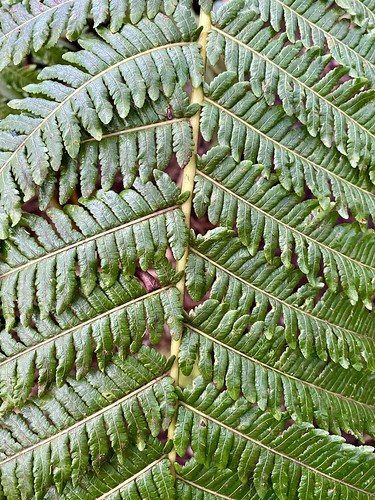 One of the many ferns along the trail
Eventually Lower Jurassic spilled out onto a much larger trail, the Pipeline Trail. I’m going to go out on a limb and guess the folks who named this trail are as unimaginative as me and there is a pipeline running underneath the trail. It was actually nice to get out of the dense forest and see more blue sky, and openness. 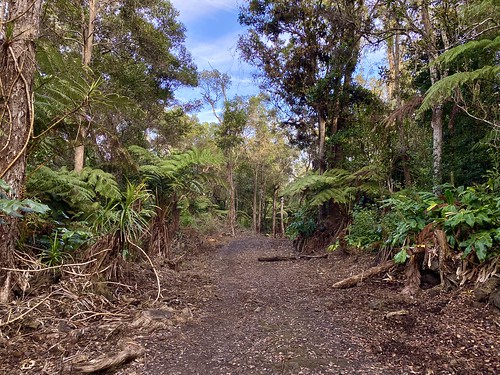 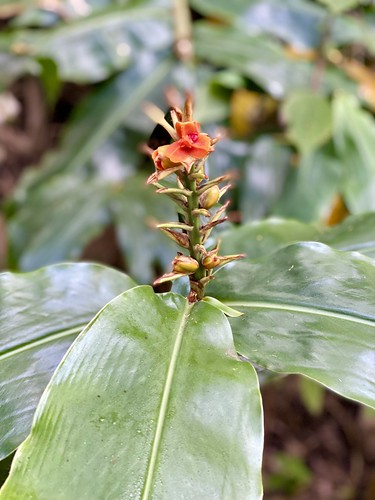 Flower along the Pipeline Trail
It was easy hiking along the Pipeline trail, as it was relatively flat and very wide. There were a number of different flower species growing along the sides. Eventually I saw the cairn marking the Hallway Trail and kept on trucking on the Pipeline trail. I came upon a section of metal fence to my right hand side and was a bit perplexed, as any fence delineating the border of the Reserve should be on my left hand side. Not wanting to step on private property and risk taking some buckshot in my arse, I quickly consulted the photo I had taken earlier of the map, which confirmed I was in the right area. Must just be some random fence. 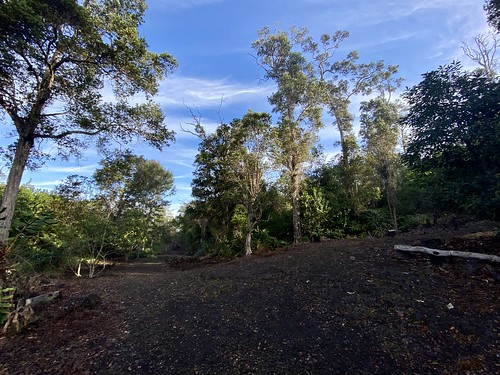 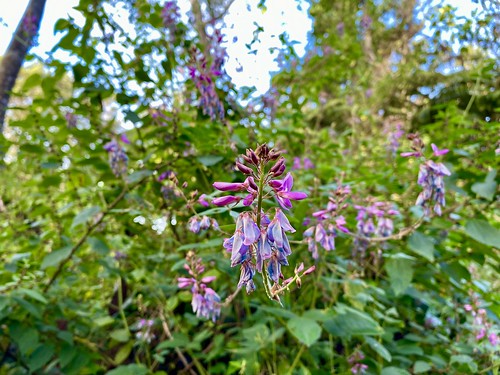 More flowers on the Pipeline Trail

The Pipeline Trail
I came upon the white marked carin and turned right onto the Pig Skull Trail, half expecting to see a pig skull hanging from a tree. While I didn’t see any pig skulls, I did cross paths with the first group of the day, as they descended down the Pig Skull Trail. The trail meandered up through the dense forest, occasionally coming up near a fence that marked the Reserve border. 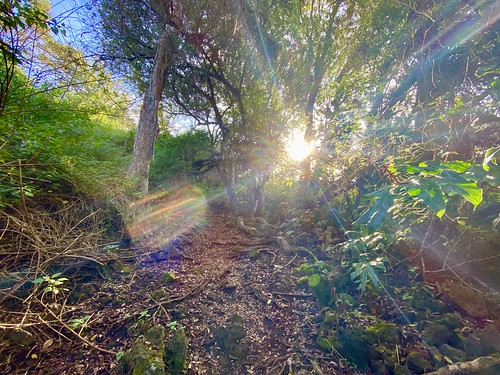 Start of the Pig Skull Trail
I reached the end of Pig Skull Trail and took a right on the Crosstown trail, the start of which was very wide like the Pipeline trail, and to the left behind a fence were some open fields. The trail eventually narrowed around where it intersected with the Hallway Trail. 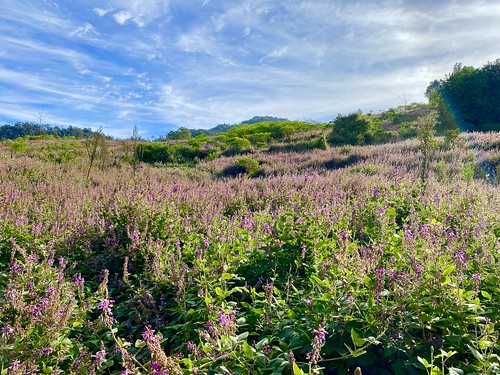 Field with flowers
I was lost in my thoughts cruising along the trail when I noticed a small trail heading off to the right. After going for a couple hundred feet, I decided I should consult the map again. That “small” trail happened to be the Upper Jurassic Trail, which I needed to take. I was so intently looking at the trail that I missed the white cairn on the other side! I circled back and then descended on the Upper Jurassic Trail back to the car, passing a number of different groups on the way. 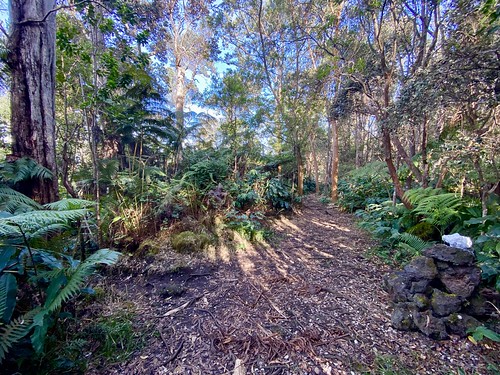 Upper Jurassic Trail
This was a nice hike to do through forest, and great contrast to most of the other hikes I did around Kona. There are no views, but a decent amount of flowers and other fauna. Not to mention the constant songs of birds. My GPX file My photos on Flickr