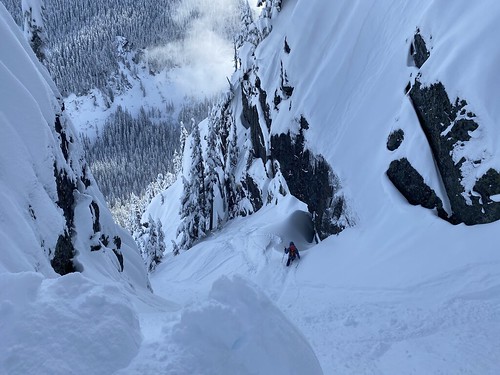 Length : 5 miles, rountrip
Elevation Gain : 2300 ft.
Guye Peak East Couloir offers a fun line that has a surprisingly short approach, given it doesn't see the traffic of other couloirs at the pass - yes, I'm looking at you, Slot Couloir! The entrance is steep and narrow, but after 50 feet, it opens up a bit and loses some of the steepness, but rest assured, it's steep enough to be an exciting ski.

The couloir is accessed via the Commonwealth Basin, with the most common approach following the summer trail / skin track up into the Commonwealth and using the fallen log to get across Commonwealth Creek. Wrapping around the base of Guye Peak, you will make your way to the saddle between Guye Peak and Cave Ridge, and then proceed south up towards the Summit. The entrance should be fairly easy to spot, it drops off to your left before the summit. Follow the couloir down and towards the bottom you may have to pick and choose your exit line based on coverage and conditions. Ski through the forest back to your skin track, and exit out of the Commonwealth Basin.

Parking is available at the Summit West parking lot. As of the 2022/2023 season, you can park for free in lot W3, which is immediately on your right as you enter the Summit West Base Area. I would advise consulting with their website to determine where to park, as it may change in the future.

Type : ski tour
Length : 8 miles
Elevation Gain : 3,875 ft.
High Point : 5,100 ft.
Download GPX View Track Only
This was my first “real” ski touring day of the year (I had gone out the previous Saturday to Mount Snoqualmie, but turned around after 1,000ft because of the wet snow and rain), and Stefan and I didn’t have anything specific we were targeting. He had mentioned that another group was going to hit Guye Peak East Couloir earlier in the day, so we figured we could use their track and make our way up towards Cave Ridge and see what we found.
We followed the skin track up into the Commonwealth basin, encountering only one other group along the way. There looked to be skin tracks across the log crossing, but we weren’t feeling it, as you had to drop down a couple of feet to get onto the log. I threw my skis on my shoulder and started booting across, but quickly found that a little treacherous, as there was a lot of loose snow underfoot. Falling into an ice cold stream in 15 F weather would quickly end our tour, so I took it slowly and made our way across. We joked that this was probably going to be the hardest part of the day. Of course a couple minutes after skinning on the other side, we saw another log crossing upstream that looked much easier - but neither of us recalled that log from the previous year. 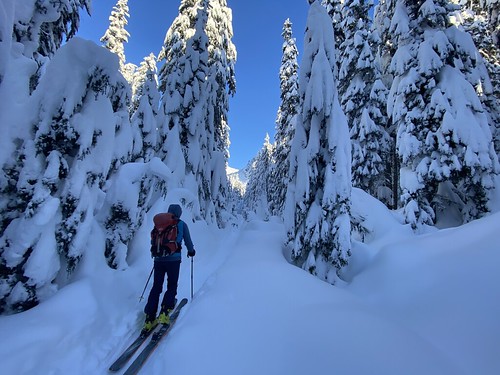 Skinning up the Pacific Crest Trail 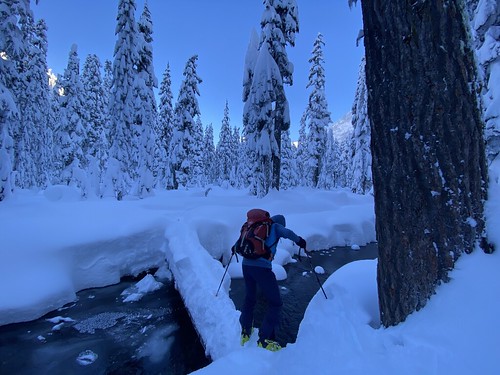 Log crossing
We followed the skin track through the Commonwealth and eventually caught our first obscured views of the Eastern side of Guye Peak. It looked like the bottom apron of the couloir needed a little more coverage, but Stefan got a text a little later that they had just skied the couloir, and no mention was made of any issues. As we slowly ascended the ski track, we decided we might as well follow the track all the way and ski the couloir rather than skiing some shots off Cave Ridge. I had only skied it once before, and conditions were pretty bad (frozen avy debris), so I was looking forward to skiing it again with powder. 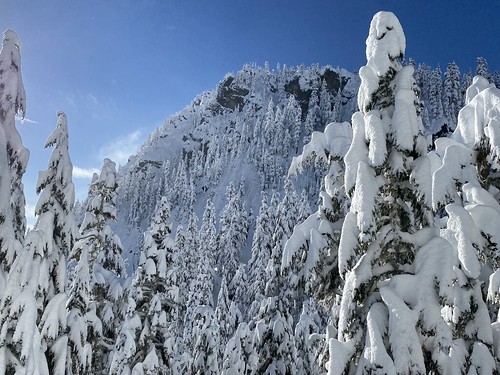 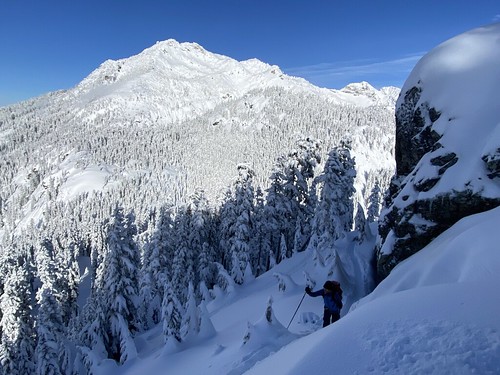 Stefan skinning up Guye Peak
At the top of the East Couloir, we were able to get a couple of glimpses of the descent and it looked good, with lots of fresh snow still left in the wider sections. We transitioned to ski mode, and I picked my way down the very top part until it opened up a bit, and then laid down some turns. The snow was pretty good, although a little bit of a mixed bag when I skied across tracks. Father down we were able to find lots of untracked snow and we took turns skiing down the couloir. 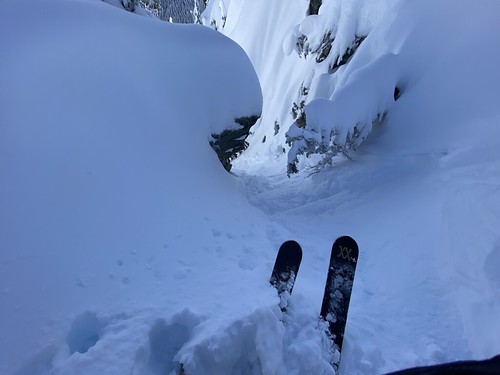 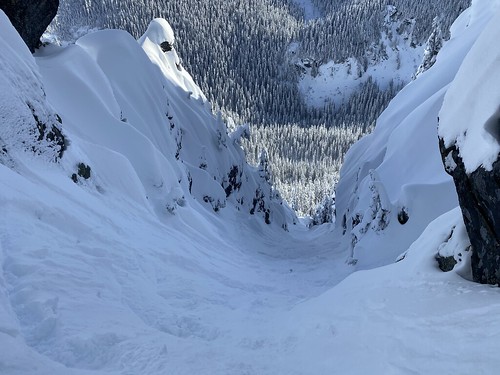 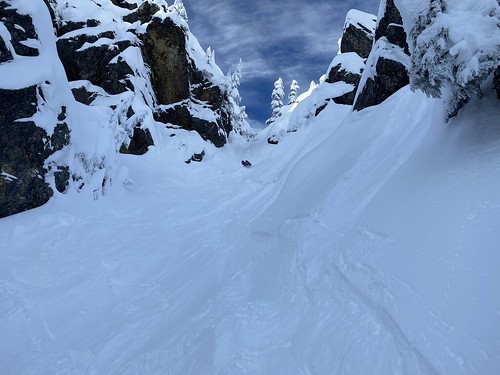 Stefan heading down the couloir 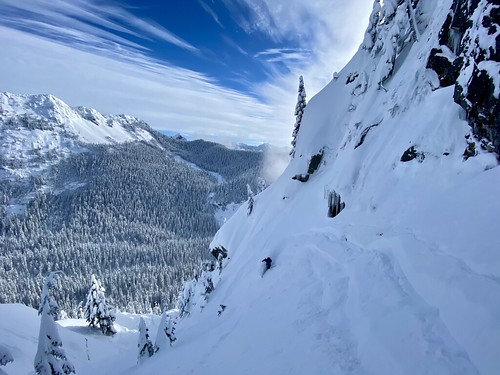 Stefan skiing with Kendall Peak in the background
Exiting out of the couloir we followed a couple of tracks to the skier’s left, as there looked to be some exposed ice directly below us. We found a nice ramp that took us down, and had great skiing through the trees and down to the skin track.
We transitioned into skin mode, and made our way back up the same track. Stefan had to fiddle with his gear, and it was still really cold, especially out of the sun, so I followed another skin track back down the other side of the creek to keep warm, before turning around to head back up to the main skin track. After discussing our options for the next ski, we decided to ski a chute that would bring us down to Alpental road - a couple of folks from the group that had earlier skied the couloir had skied the chute the day before. Neither Stefan nor I had skied it before, and it seemed like a good way to cap the day. 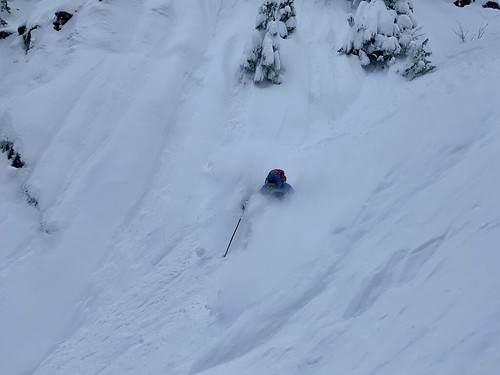 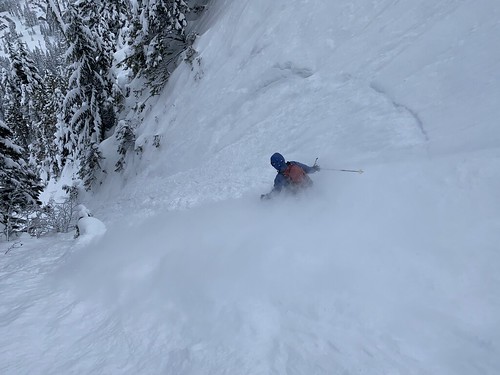 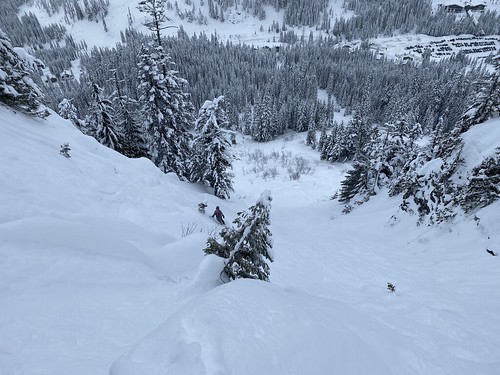 Heading down the chute
We skied fall line all the way down to the South Fork of the Snoqualmie River, ending up directly across from the Alpenrose Condominiums. We fortunately found a snow bridge across the river, and had to break our first trail off the day for 5 minutes until reaching Alpental road. We walked along the road and Stefan was able to hitch a ride to his car, and came back to pick me up (forgot to turn of my GPS off until we were driving past Summit West). 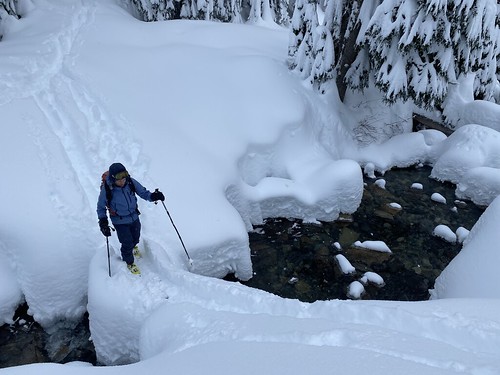 Snow brdige across the South Fork of the Snoqualmie River
All in all, a great first day out for the season. Got to ski a couple of fun lines and explore some new terrain, and outside of 5 minutes of work, didn’t have to break trail all day. My GPX file My photos on Flickr