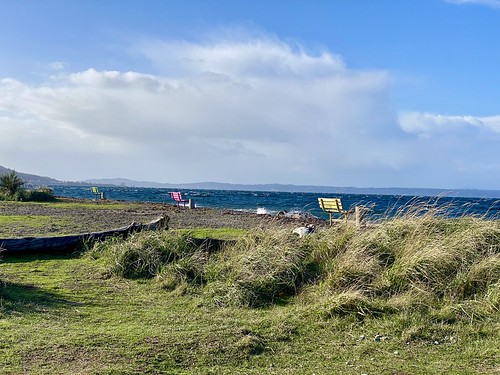 Length : 2.4 miles, loop
Elevation Gain : 320 ft.
While most Seattlites would associate summer beach time with Golden Gardens, an 87 acre park on Puget Sound the the Ballard neighborhood of Seattle, the park offers a number of trails which can be linked together to provide a moderate hike. The hike will take you along the beach, past wetlands featuring a beaver dam, and up the hillside through dense pacific northwest forest.

Start your hike by taking a quick stroll out into the Puget Sound on the Shilshole Marina Pier at the southern end of the park. Proceed on the paved walking trail north towards the beach, and take the paved trail on the east side of the bath house past the lawns; feel free to abandon the walking path to head out onto the beach near meadow point and then return to the path. Follow the walking path around the lawns, and take notice of the wetlands on your left, including a beaver dam. Walk back past the bathhouse and take the underpass on your left to get on the other side of the train tracks. Take a left out of the underpass to walk north in the parking lot, and take the stairs heading up the hill near the end of the parking lot.

At the top of the stairs head left on the dirt trail to access the upper trail system. There are a number of criss-crossing trails, but this particular trail will eventually dead-end at the northern end of the park. Retrace your steps, heading left at trail junctions and proceed on the upper trail through the dog park, and cross the street to access another set of stairs heading up the hill. Part of the way up the stairs, take the trail to your right to start descending down the hill. Follow this trail until it’s end, and then follow the road through the underpass and back to your car.

Proceed west on Northwest Market Street in Ballard, and take a Slight left onto NW 54th St/NW Locks Place. Continue on Seaview Ave for 1.4 miles to access the entrance to Golden Gardens Park.

Golden Gardens Park has a number of different parking areas, however during busy weekends when the sun decides to come out, expect parking spaces to be in limited supply, if non-existent. You can likely find street parking along Seaview Ave, which shouldn’t be too far away from the start of the hike at the Shilshole Marina Pier. There is no cost or permits required for parking.

Type : hike
Length : 2.4 miles, loop
Elevation Gain : 320 ft.
High Point : 200 ft.
Download GPX View Track Only
I frequently go to Golden Gardens Park to enjoy the beach with the family in the summer, or bring my son to the playground - It’s a nice 3.5 mile bike ride from my house - but Golden Gardens certainly wasn’t a place I associated with hiking, even though I have been on the trails once or twice over the years. There isn’t a lot of mileage on the trails, however if you combine a walk along the waterfront with the trails on the hillside above, it makes a great loop and takes you through a nice mix of environments - waterfront & beach, wetlands and forest.
I decided to start my hike on the South End of Golden Gardens, and had no trouble finding a place to park. It was a very windy day, and what better way to enjoy the bluster than out on the pier in Puget Sound? After taking in the Puget Sound, I made my way back onto land and followed the paved path towards the beach, stopping occasionally to watch the waves crashing against the shore. The tide was very high, with waves going past the large logs that we typically sit on during the summer. 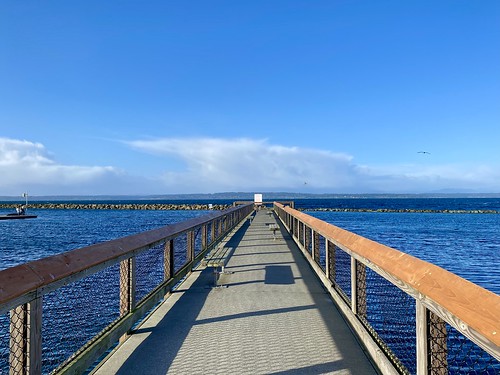 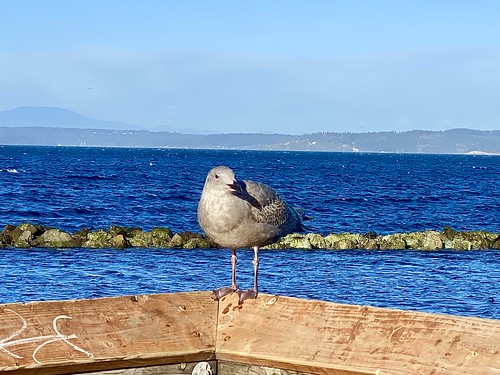 Seagull on the pier 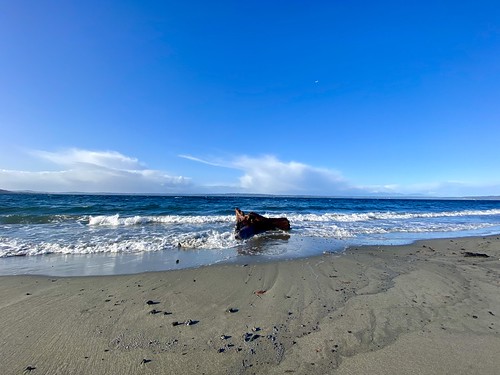 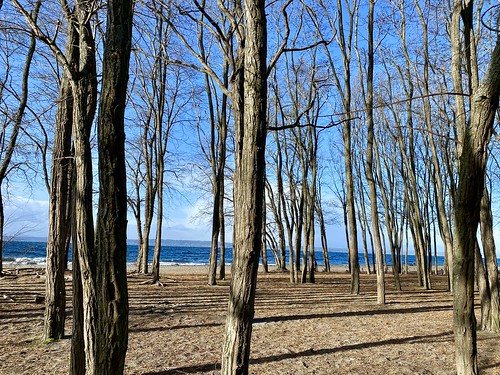 The Groove at Golden Gardens
The trail around the greenspace North of the Bathhouse was covered in parts with water, and once I reached Meadow Point, I took the trail out onto the beach and looped around back through the Wetlands. I have a new appreciation for the Wetlands in the fall with heavy rain, soaking my shoes as I walked through the water on the trail past the beaver pond. 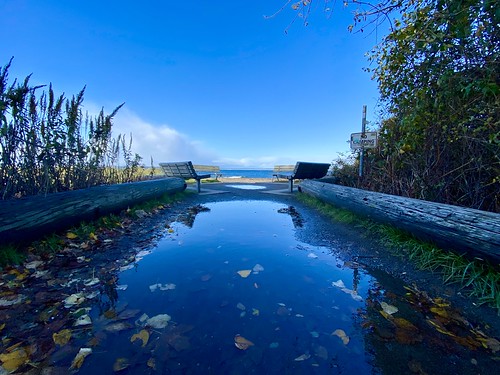 Water covered trail out to the beach 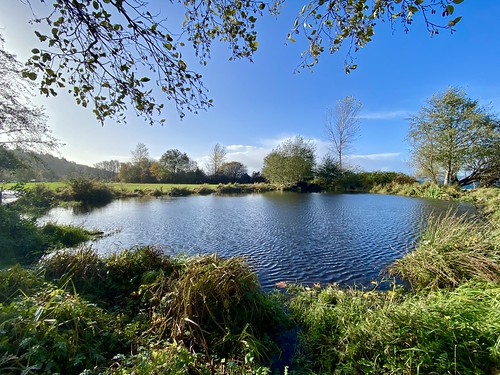 Wetlands at Golden Gardens Park
I then took a left onto the underpass underneath the train tracks, and came up into the parking lot and looked for a path that would take me up to one of the trails. After scouting around, it was hard to tell if there was a real trail. I headed up what looked like a trail, but it disappeared into the undergrowth as I trudged up, but I stubbornly kept going until I reached the trail. Later I realized there was an official trail replete with concrete stairs at the North end of the parking lot - next time. As I made my way along the trail, I passed a parks worker who was using a blower to clear the leaves off the trail. 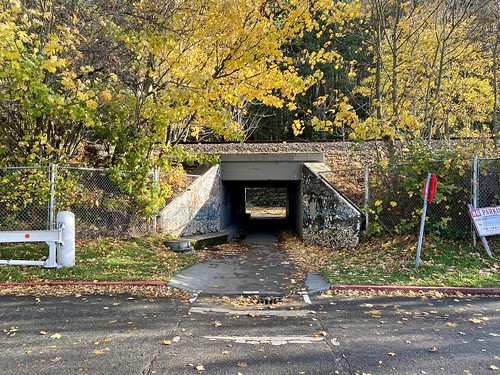 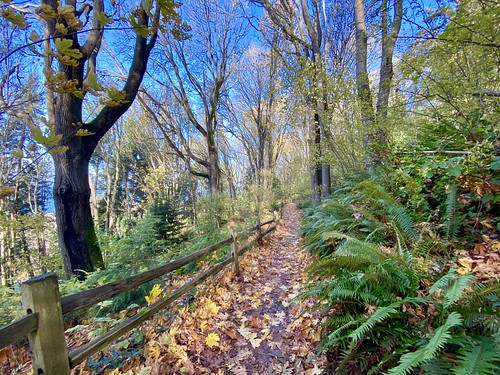 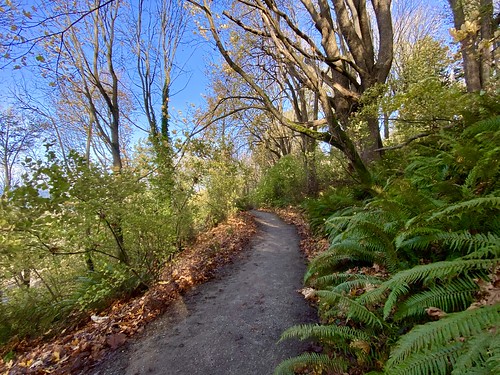 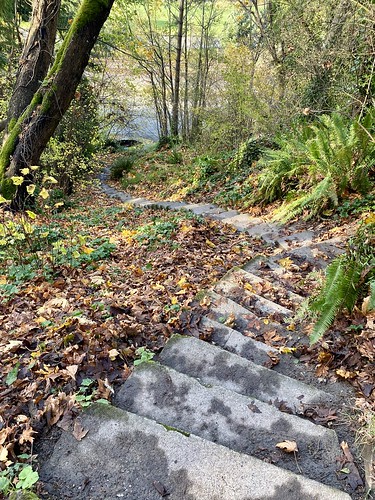 Path I should have taken
The trail eventually passed underneath a large fallen tree, and I followed it for a little while longer before turning around. The trail was much narrower and muddier, and I knew from past experience that the trail unceremoniously dead ends, and there isn’t much to see. 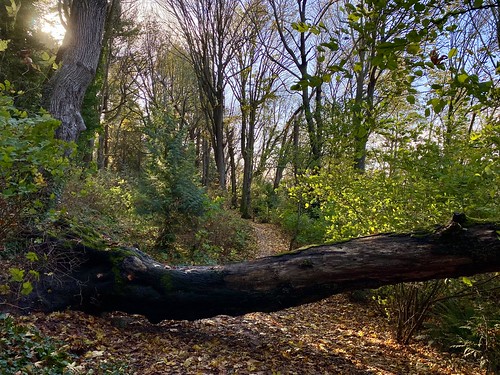 Good spot to turn around in hiking this trail
I retraced my steps and at the next trail junction went left to get onto one of the upper trails. There were a number of criss-crossing trails, but I kept my course and it wasn’t long before I was hearing the yelping of dogs, and emerged from the forest at the off leash dog park. I crossed over Golden Gardens Drive and took a set of steep stairs up to the final trail. I followed the trail down to the bottom at Seaview Place and walked underneath the tracks on the side of the road back to my car. 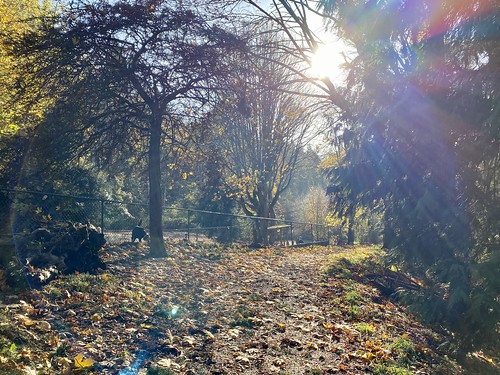 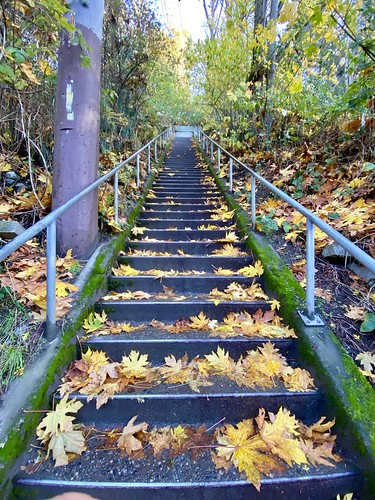 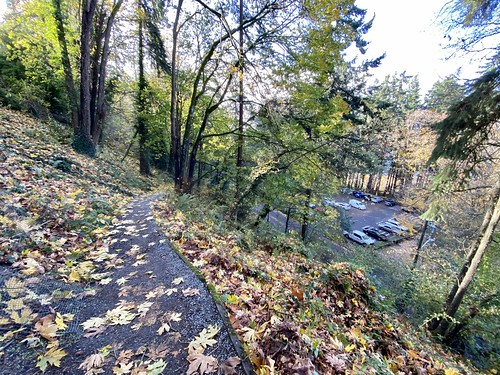 Final trail back down to the car
A great hike with a mix of waterfront and forest close to my house. While I will always associate Golden Gardens with summer and beach time, I will be back here to hit the trails again soon!