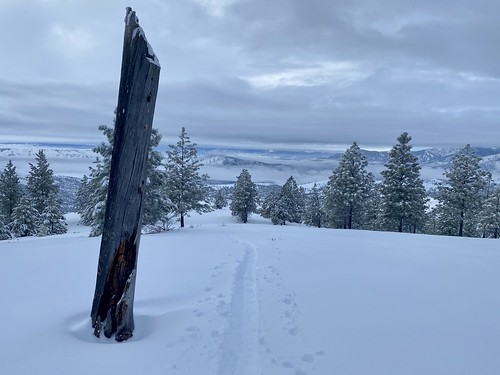 Length : 4.7 miles, roundtrip
Elevation Gain : 1300 ft.
An unnamed mountain with a high point of 4,326ft that sits in the center of the Outback loop at Echo Ridge provides sweeping vistas of the surrounding mountains, views of Lake Chelan and the chance for some limited, but good turns in isolated sections of well spaced glades. There are a variety of ways to approach Outback during the winter, with one of the most direct approaches being via the Zoom Trailhead. After following the Zoom trail for 1.4 miles, you will reach the North Junction Trailhead. Follow the Waterbar Heaven Trail towards Outback, and at the junction with Outback, head right. Proceed East along the Outback Trail and look for a spot to veer off the trail and up towards the high point of 4,326ft.

The best skiing down is typically found in some of the well spaced glades near your ascent, however these are limited and won’t provide a lot of vertical . Depending on the coverage, the open slopes often have a lot of bitterbush in the way, and you are more likely to encounter rocks hidden below. Ski towards North Junction Trailhead and follow your skin track on the Zoom Trail back to the car.

If there has been snow overnight, consult the grooming report from the Lake Chelan Nordic Club to determine when the road will be plowed.

From Chelan, take WA-150/W Manson Rd for approximately 2 miles. A short ways after the traffic circle, turn right onto Boyd Road. Continue on Cooper Mountain Road and then Cooper Gulch Road and finally onto Echo Ridge Forest Service 8021-100 Rd/NF-8010. The Zoom Trailhead will be on your left about a mile after passing the Echo Valley Ski Area.

Type : ski tour
Length : 4.7 miles, roundtrip
Elevation Gain : 1,336 ft.
High Point : 4,326 ft.
Download GPX View Track Only
Walking to my car Sunday morning, I instantly noticed the wet snow, a complete reversal from the light fluff from the day before. Echo Ridge was about 2,000ft higher than my house, so I was somewhat confident the snow should still be in good shape up there. But given I was new to the area, there was some lingering doubt. Arriving at Zoom Trailhead, I confirmed the snow was still in good shape. It had definitely warmed up, but it was still lighter than most of my backcountry days at Snoqualmie Pass... 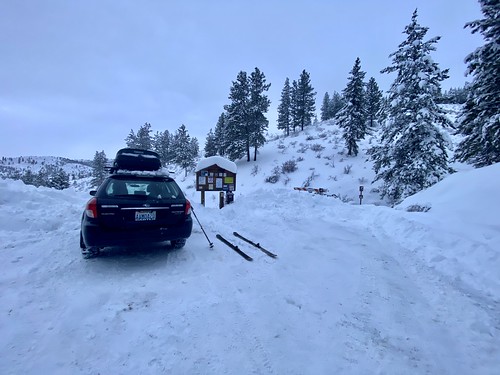 Zoom Trailhead
There was no one in the parking lot and no one had ventured out on the Zoom trail yesterday, so I was going to be breaking trail the whole way up. Fortunately, the snow wasn’t as deep as what I had encountered on Fourth of July Mountain, as I think some folks had been on the trail prior to this last storm. 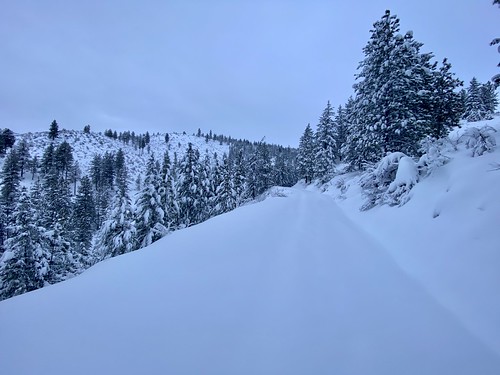 Heading up the Zoom trail
It took me about 45 minutes to reach the North Junction Trailhead. I had to constantly remind myself to slow down, as I’m not in good shape, and quickly ran out of breath when I went too fast. Along the way I got eyes on my target, and noticed the open slopes were still packed with bitterbush. I noticed a stand of nicely spaced trees to the lookers left of the high point, and made a mental note for a possible line to ski. 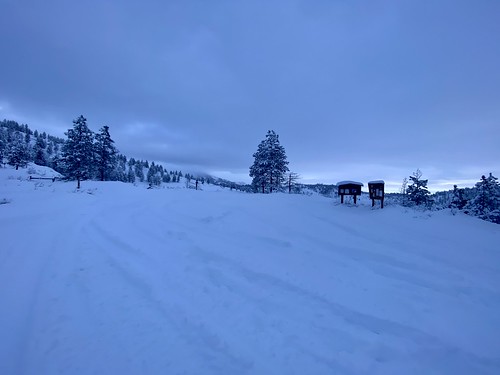 North Junction Trailhead
There were a number of snowmobile tracks coming through North Junction, but they must have been from the previous day as I hadn’t heard any snowmobiles so far. Which surprised me, as I was expecting there to be a decent amount of snowmobile traffic. When scoping out the tour, I had considered coming up Bergman Gulch, as that might have given me more options for skiing out. But snowmobiles were allowed on Berman Gulch, and I didn’t have to worry about getting out of the way for folks snowmobiling up the trail.
I hadn’t put in a lot of thought; strike that, I actually hadn’t put any thought or planning into how I was going to get up to the high point from North Junction. It was a mellow slope without any obstacles, and I figured any route would do. I saw a deer trail heading to left on Waterbar Heaven, which was in the direction of the nice glades I noticed on the approach, so I followed the trail. 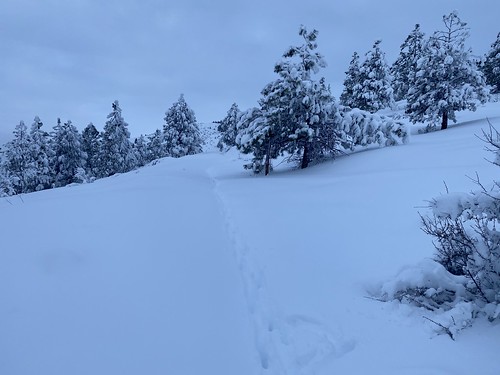 Deer trail leading the way on Waterbar Heaven
Following the deer trail, I caught my first glimpse of Lake Chelan hiding amongst a low layer of clouds. It wasn’t long before I had to bid adieu to my animal guide(s) and their wonderful trail breaking capabilities, and head up on my own. I was able to cover a good amount of vertical with only a few kickturns, and it was a pleasant skin up through the trees. I was confused for a second when I crossed the Outback trail, but then remembered I had followed the deer tracks on Waterbar Heaven, which runs below Outback. 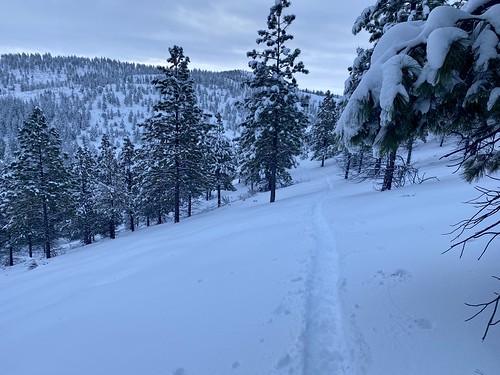 Pleasant skin up through the trees 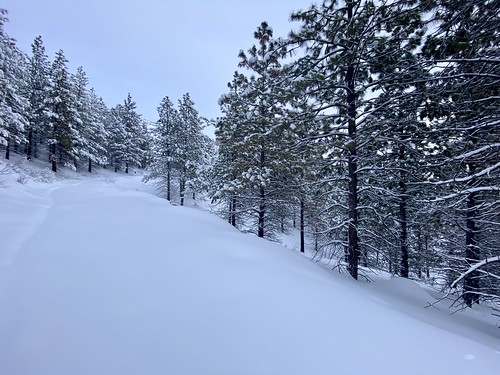 Crossing over Outback trail
I popped out of the trees and began to proceed up through the open slopes covered in bitterbush, encountering a rock or two along the way. As I progressed up, I got a view of another glade of trees on the other side, which looked nice as well. It seemed to run up to the high point, whereas the glad I had just passed through stopped well short of the top. 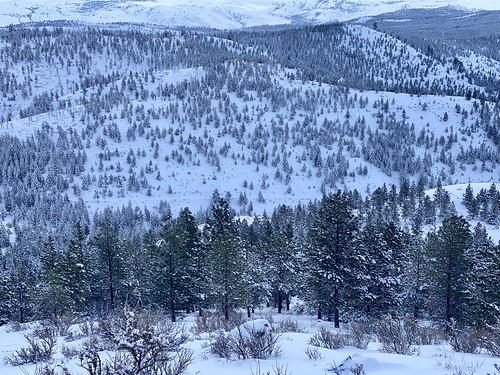 Looking back at what I skinned up 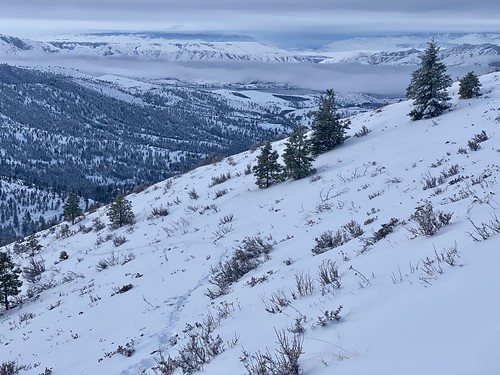 Getting near the top
I skinned up to the high point, or at least what I think it the high point, as it’s fairly flat at the top and tough to tell with the snow. I wanted to take a look at the Northern slope as well as some of the mountains on the other side, so I quickly skinned over for a peak. It was hard to tell if there was any good skiing on the Northern aspect, and the mountains farther North looked fine, but probably not worth the effort to get there. 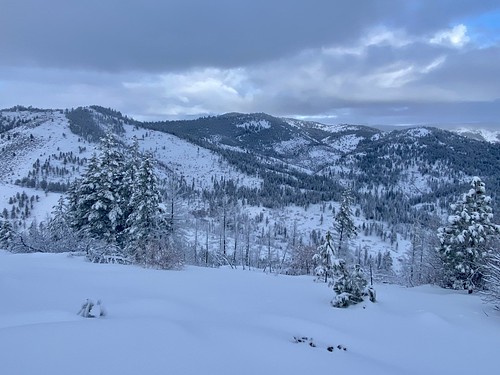 Looking North from the high point
Decision time. Do I descend near my skin track where I knew there was some tree skiing with good snow, but in very limited quantities? Or do I make my way over to the stand of trees on the other side that looked like it had more vert and came up close to the summit? I opted for my skin track. I think the better approach, and the one I will take next time, is where those trees were on the Southeast Ridge. So I might as well ski what I came up and save those trees for next time.
I cautiously skied down the open slope, dodging bitterbush. It was consistent snow, and I wasn’t hitting any rocks, so I was able to get some decent turns in, but never felt comfortable enough to open it up. Once I got into the trees, the bitterbush was almost non-existent and I linked some nice turns through the powder. But before I knew it, I was out of the trees and realized I had skied below my skin track into a small gully. 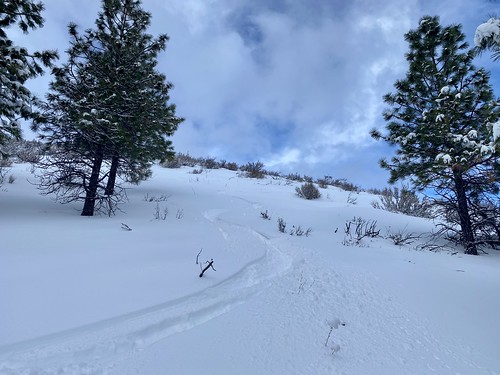 Turns coming into the trees 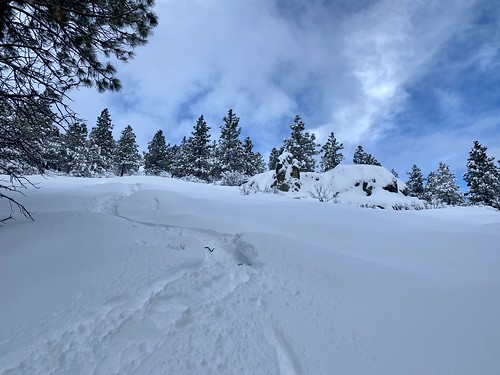 Glade skiing at Lake Chelan
Another decision to be made. While the slope below me was covered in bitterbush, I could see the Zoom trail.It looked like a not very fun but easy ski down into Bergman Gulch, and then it was a quick skin up to Zoom trail. Otherwise I would have to skin back up to catch my skin track and then traverse out on the track. It was an easy decision, better to procrastinate when it comes to putting the skins on.
I was able to do a downhill traverse around the hill through the bitterbush, and then finally found a spot where I could link a handful of turns into Bergman Gulch. Then it was skins on, and a very quick skin back up to the Zoom trail. Definitely the right call, as it would have taken a lot longer to go the alternate route. 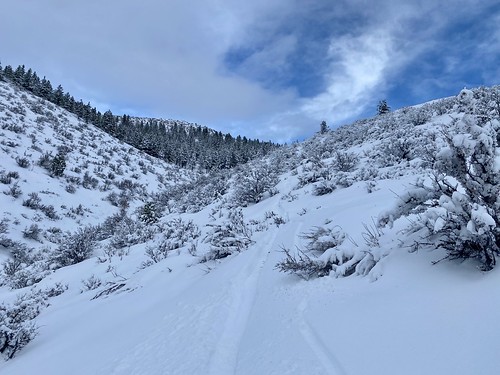 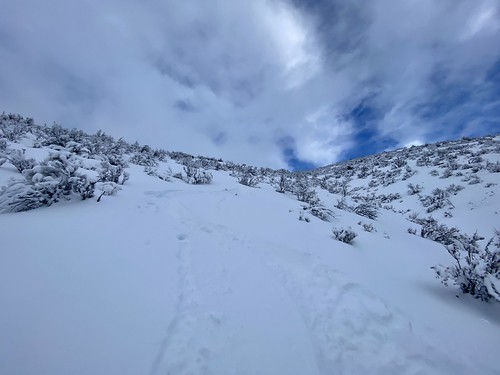 Final turns of the day 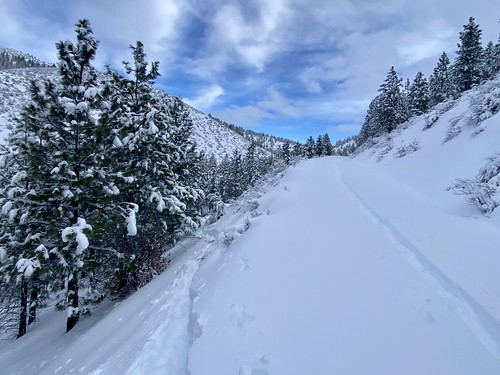 Skin track back up to Zoom trail
I ripped the skins and made my way back down the skin track. Fortunately, it didn’t require a lot of effort to get down the Zoom trail, as it was mostly downhill, albeit at a very low angle. I passed a group of deer far up on the hillside and thanked them for breaking trail for me; however they didn’t seem interested in conversing. 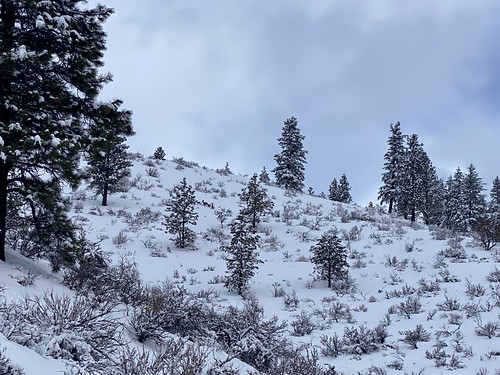 Trailbreaking group of deer
While the amount of actual skiing was minimal, it was fun to get out and explore Echo Ridge during the winter. I’ll be curious to see if we get enough snow to “really” be able to ski these slopes. Either way, I’m sure I’ll be back to this area to poke around again, as it’s close to home and an easy way to get out into the mountains.