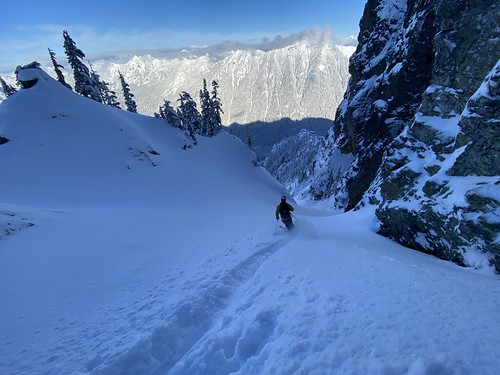 Length : 10 miles, roundtrip
Elevation Gain : 6,000 ft ft.
While not nearly as popular at the nearby Slot Couloir, the Circus and Crooked Couloirs are also located on the backside of Snoqualmie Mountain and can provide great skiing when the conditions line up - the Crooked Couloir has a number of different aspects and it’s not uncommon to find wind affected snow, especially on the top bowl. The Circus Couloir is more protected, doesn’t see as much traffic as other areas of Snoqualmie Mountain and can offer great skiing even when snow conditions in the Crooked are less than ideal. However the traverse to the entrance of the Circus has a bit of exposure (an alternative approach is to boot up from the bottom of the Circus, however you are at risk of someone skiing down on you as you don’t have a direct line to sight to the top of the Circus Couloir).

To access the Crooked Couloir, skin up Snoqualmie Mountain to the looker’s left of the Phantom Slide Path and head to the top of Snoqualmie Mountain. If following an existing skin track, you will likely pass by the entrance to the Slot Couloir. The top of Snoqualmie has some tight small trees that require either creative track setting or boot packing. Head east from the summit and look for an entrance into the top bowl to begin skiing the Crooked. The very bottom of the Crooked has a constricted exit, and you may encounter an ice flow, especially early in the season.

The Circus Couloir is accessed from the bottom half of the Crooked Couloir. At roughly 5,400ft, you will traverse hard right into the trees making sure not to get pulled down the hill. While I have heard you can directly traverse to the entrance, I have always had to put in a short bootpack up to a bench as soon as I get into the trees, and then continue traversing. You will pass over the top of a small bowl that looks like it might be skiable (it’s not, it ends in a cliff), before reaching the entrance to the Circus. After skiing the Circus, lay a skin track back up to Thunder Creek Basin.

From Thunder Creek Basin, skin up to the notch on the ridge on the looker’s right of Snoqualmie Mountain (to the right of Slot/Snot Couloirs). Depending on conditions, you may need to boot pack the top part, and be aware of cornices along the ridge. Ski down the front side of Snoqualmie Mountain, staying close to your skin track if you are unfamiliar with the area.

From Seattle, drive east on I-90 and take exit 52. At the end of the off-ramp, take a left to go under the interstate, and follow WA-906/NF-9041/Alpental Road for a mile and a half. Look for the parking lot on the left just before the bridge over the South Fork of the Snoqualmie River, or follow directions from the Summit at Snoqualmie Staff on where to park.

There is a medium sized parking lot right across from the start of the tour that is part of the Summit at Snoqualmie / Alpental ski area. During weekends and holidays, the ski area may require you to be a passholder in order to park here (they will direct you to a lower lot, and you will have to walk a short distance). Note, on busy weekends and holidays, parking at Alpental can completely fill up, requiring you to park at another base area and take a shuttle.

Type : ski tour
Length : 10.2 miles roundtrip
Elevation Gain : 7,010 ft.
High Point : 6,224 ft.
Download GPX View Track Only
As Tim and I drove up to the Pass, we discussed options for the day. Tim had thrown out Kaleetan, Kendall area or Circus Couloir. After seeing the stable conditions and zero wind effect during my tour on Guye Peak East Couloir, I felt good about getting up high and skiing something steep. We ultimately decided on Circus Couloir as it was really rare for the upper part of the Crooked to have good snow and stability and Tim had laid a skin track on Mount Snoqualmie the previous day while going to the Slot.
There were a couple of cars in the parking lot when we pulled in, with one group gearing up. We were able to get on our gear in Tim’s van and stay warm - not sure the exact temperature, but it was still cold, at least for Seattle. Following the existing skin track, we made good time and took a quick break after exiting the trees around 5,200ft. 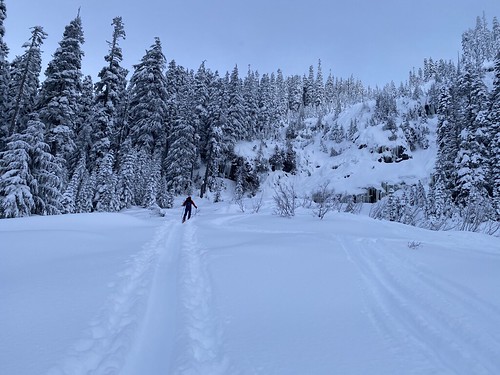 Skinning up below the Phantom slide path 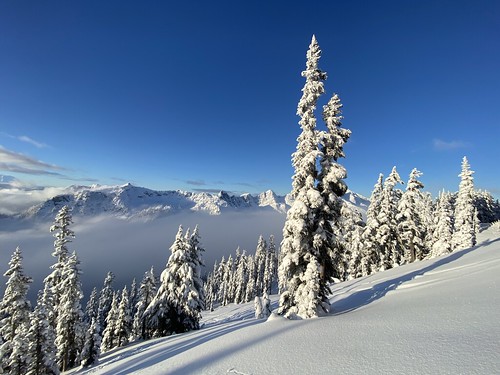 Beatiful day for a ski tour 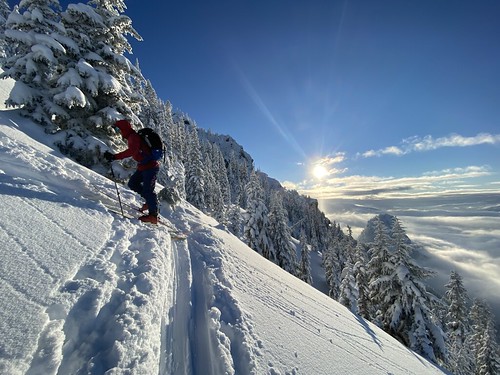 Tim skinning up Mount Snoqualmie
There was a group of two ahead of us, and they broke off the main skin track and opted to ski down the front side of Mount Snoqualmie. We eventually reached the end of the ski track near the top of Snoqualmie, and picked our way through trees to reach the summit, and then a quick traverse over to find an entrance to the Crooked. I have typically gone farther East along the ridge to get into the top bowl, however with the amazing conditions we were able to find a closer entrance. 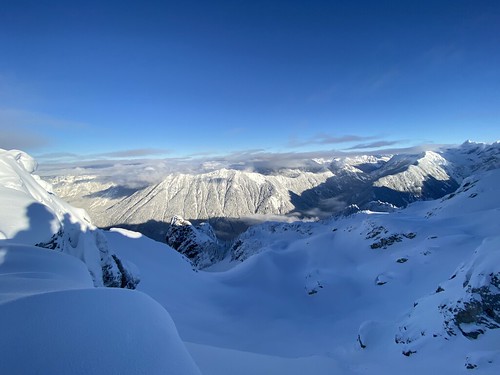 Top bowl of the Crooked Couloir
I dropped in first, and did a quick ski cut. Finding stable conditions as expected, I skied the top part and then pulled over to the side to let Tim ski by and grab a couple of photos. We re-grouped at the bottom of the bowl and then skied the next section, stopping where the trees pop up in the middle of the run. 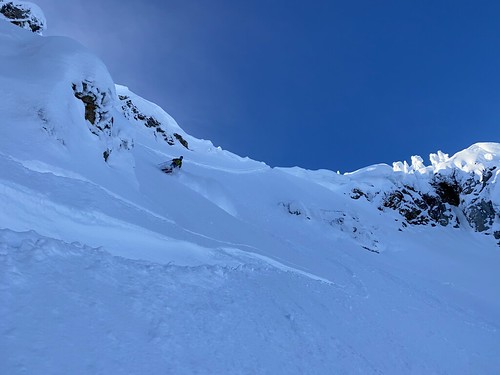 Tim skiing the top bowl of the Crooked Couloir 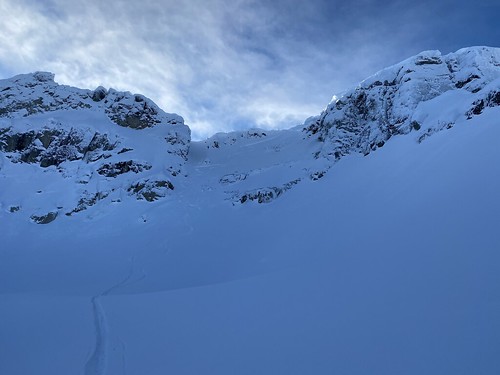 Our tracks down the top of the Crooked 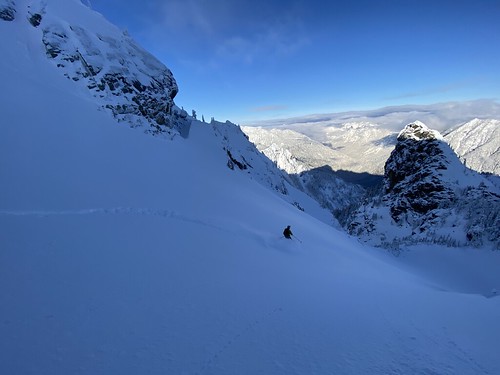 Lovely snow
We had some discussion on traversing over to the Circus Couloir. Both Tim and I had skied the Circus for the first and only time a couple of years ago, and we traversed over too low and had to bootpack up. We began our traverse, trying to maintain a high as line as possible, but we ultimately ended up in the same place we had a couple of years ago - looking into a chute that looked skiable, but ends up above a large cliff. 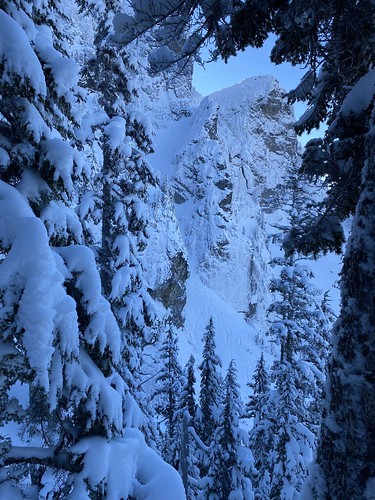 Slot Couloir with lots of tracks
The snow was way too deep to bootpack up, so we threw on our skins and headed back the way we came, and then a couple of kick turns and veggie belays later, we were high enough. Looking back towards the Crooked, I’m not sure how you can actually traverse over, unless as Tim joked, it’s possible once it snows 2,000 inches. We skinned across one at a time the top of a small bowl perched above a cliff, and arrived at the top of the Circus Couloir. 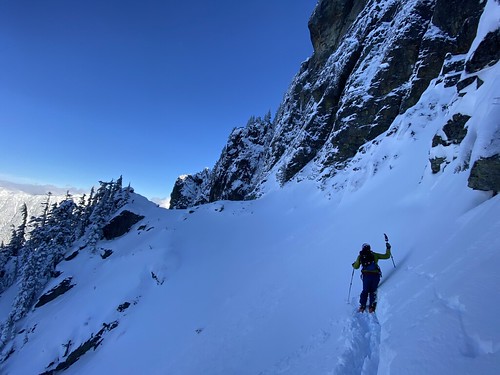 Tim skinning to the start of the Circus Couloir
Tim dropped in first and after giving him ample time to get down the run, I followed. The skiing was fantastic with light snow and a nice sustained fall line. I stopped once during the run to snap a couple of photos, and rest my legs, while Tim skied it in one shot.

Tim skiing the top of the Circus Couloir
We transitioned to skin mode and started laying a track back up into Thunder Creek basin. Breaking trail wasn’t too bad in the forest, but it was slow going out in the open with copious amounts of fresh snow. Fortunately, I knew this was the last of the trail breaking we would have to do. We then hooked up with the existing skin trail and made our way to the exit notch. Tim had mentioned they had laid a skin track all the way up to the top; however there must have been a marauding band of bootpackers pillaging Mount Snoqualmie, as the skin track was destroyed near the top of the exit. 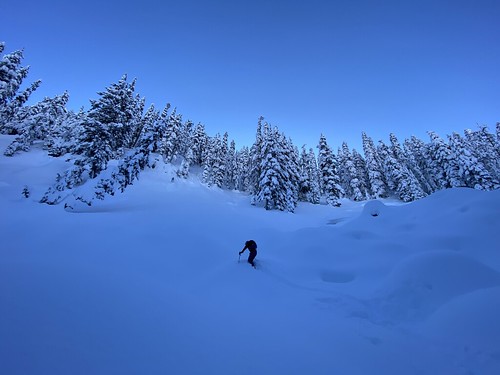 Skinning up to Thunder Creek Basin 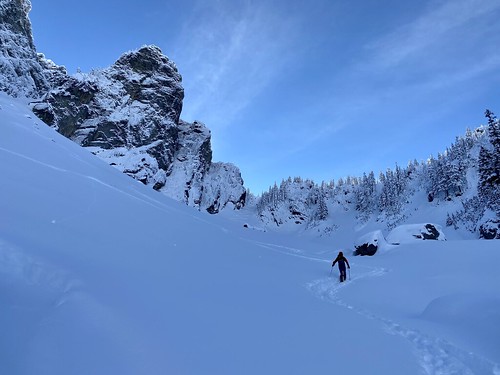 Heading up to the exit notch
Back on the South side of Mount Snoqualmie, it was decision time : ski down to the car, head up the skin track for more vert and then ski down to the car, or do a full lap on the Crooked Couloir. I was starting to get tired, but knew skiing the Crooked in these conditions was something that rarely ever happened. That little voice in my head told me it’s not something I should pass up and the best way to get into ski touring shape is to have a huge day. I think Tim was relieved to hear I was up for another lap, as he is half machine and never seems to tire. 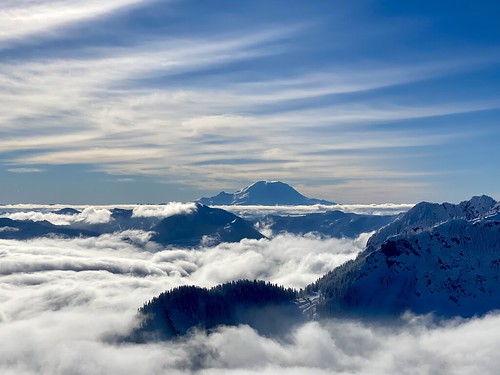 Mount Rainier towering above the clouds
We made quick work of the skin track and were back at the top of the Crooked Couloir. Tim dropped in first and we had another amazing ski down the Crooked, and this time didn’t have to mess around with trying to get into the Circus. I’m on the fence about the best way to get into the Circus - it might be better to just ski the Crooked and continue down to the bottom of the Circus and then skin up versus having to throw skins on and make your way over to the top. 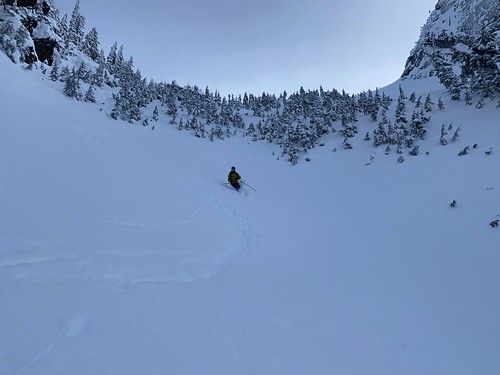 Second lap in the Crooked Couloir
The ice bulge in the choke of the Crooked was still pretty pronounced, but it was easy to ski around it and come in from the side. We jumped back on the skin track and made our way up to the exit notch - the bootpackers had struck again, tearing up more of the skin track. The ski down to the car was great, we were able to find some nice lines that hadn’t been chewed up and the snow was still in great condition. 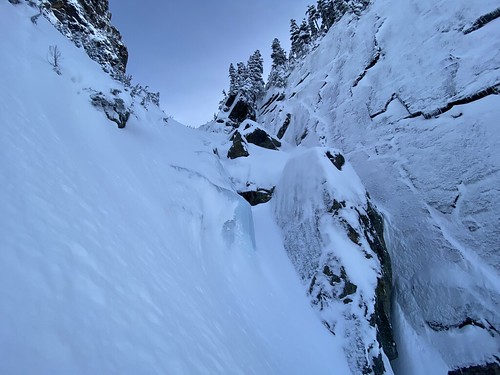 Ice bulge in the Crooked Couloir 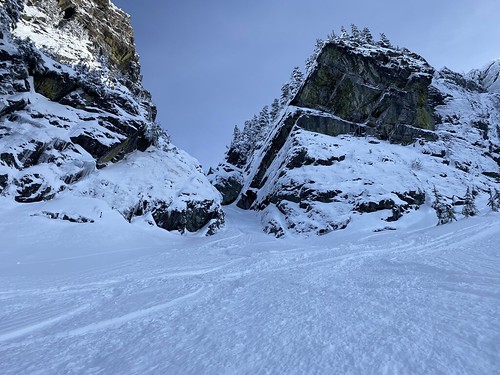 Our tracks out of the Crooked Couloir
What a day and a great way to wind down a tough 2021! It’s hard to believe we were able to ski all those aspects on Mount Snoqualmie on a sunny day, with zero wind effect and amazing snow.