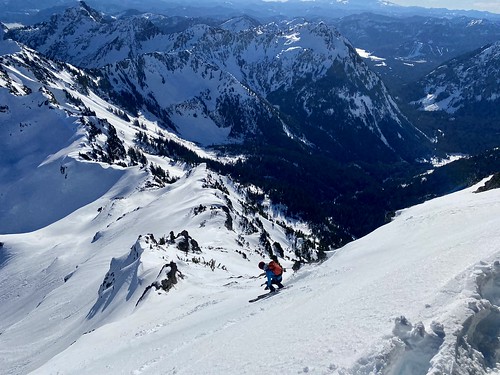 Length : 22 miles, roundtrip
Elevation Gain : 5900 ft.
Chikamin Peak is a picturesque mountain towering over the end of Gold Creek Valley and is easily visible from the Hyak area at Snoqualmie Pass. Staring at the southwest aspect from the comfort of Hyak, it’s easy to daydream about skiing one of the obvious lines down from the summit; however, the hard part is getting there, as its arduous eight mile trek up Gold Creek Valley. It's certainly possible as a day trip ski tour, but in my experience is more enjoyable as a multi-day tour, giving you the chance to explore other peaks in the area.

From the Gold Creek Sno-Park, follow the road through the Ski Tur Valley community to the Gold Creek trailhead. Continue on the summer trail up the valley. I have heard some folks prefer crossing over Gold Creek part of the way up the valley and continuing on the western side, however it can be difficult to find a suitable place to cross. Either way, expect to navigate steep banks above the creek, large slide paths and other obstacles on the way up. Eventually you will come out of the forest on the slopes of Chikamin, and you will likely need to transition to bootpacking (often with crampons) to climb up towards the summit. On good snow years / later in the season, it should be a straightforward ski from the summit (my January ski was short of the summit, when I skied it in April many years ago, we skied from the summit). At the bottom of Chikamin, follow your skin track back out, or roll the dice and try your luck on a different route out...

Driving on I-90 east from Seattle, take Exit 54. At the bottom of the off-ramp, take a left to pass under the interstate and a few hundred feet turn right onto Forest Service Road 4832. This is the start of the Gold Creek Sno-Park, and parking anywhere along this road requires a Sno-Park pass. Follow this road for roughly 1 mile and find the Gold Creek Pond winter trailhead on your left.

There is ample parking along the road at the Gold Creek Sno-Park, as if you are doing Chikamin as a day trip, you will be there in the early morning hours. If you are doing a multi-day and may be arriving late on a busy weekend (January), Gold Creek Sno-Park can be a zoo, with lots of people trying to get in and out. Sno-Park passes are required, and expect strict enforcement of parking passes during weekends and other high traffic times.

Type : ski tour
Length : 24.3 miles, roundtrip
Elevation Gain : 5,915 ft.
High Point : 7,080 ft.
Download GPX View Track Only
Tim texted about heading to Chikamin as a day trip and it piqued my interest. While I have been up Gold Creek a number of times over the years skiing the likes of Alta, Kendall and Rampart Ridge, I had only gone up and down the entirety of Gold Geek once, when I did a multi-day trip that included a ski off of the summit of Chikamin. I remember Gold Creek being not fun, but time heals all wounds, as that trip was over 10 years ago.
Within the first 30 minutes of the tour we had a number of small mishaps. Lucas had snoozed his alarm and was late for a meetup at Mercer Island Park and Ride. As I went to put on my gear at the car, I discovered my headlamp batteries were dead and Tim lost tip attachment to his skins while skinning up the snow covered road.
We had to double-check our route through the Ski Tur community a couple of times - it always hard to navigate in the dark, especially and we missed the desired road once or twice, but eventually got on the summer trail and more or less followed that for a while. It was relatively easy skinning at the beginning. Eventually we came to some slide paths that necessitated taking the skis off to cross. We had a couple of steeper banks we had to gingerly traverse across on skins, as the snow was very firm in places - we obviously didn’t want to slip and go for a swim in Gold Creek! 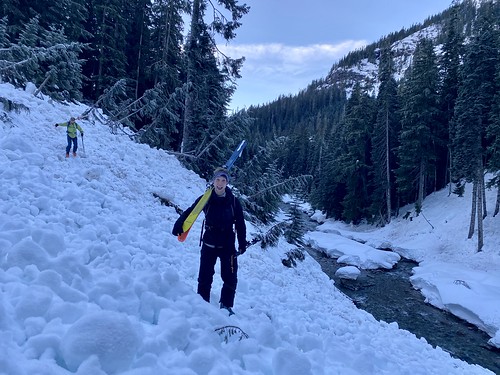 Lucas booting across one of Alta's slide paths 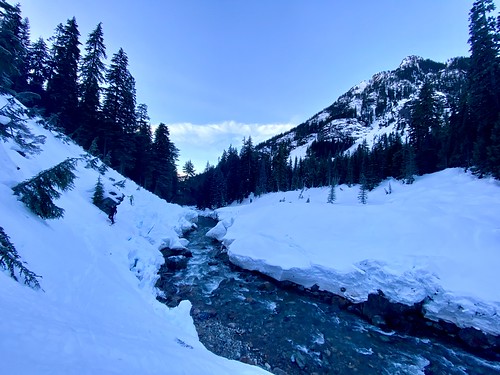 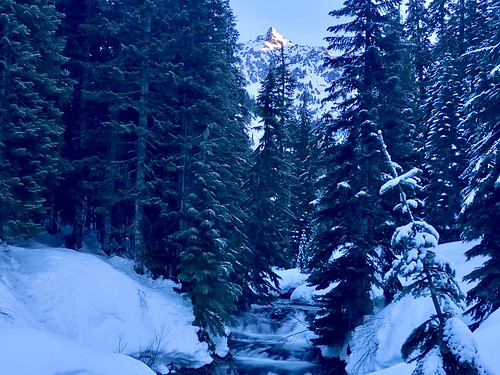 Morning light on Chikamin Peak
We eventually got a view of Chikamin through the forest, as the morning light was hitting up the summit, and that got everyone stoked. While we discussed potentially crossing Gold Creek if the opportunity presented itself, we ended up staying on the East side the whole approach. As we got closer to the terminus of the valley, we skinned up a ridge and then side-hilled across the lower flanks for Chikamin, before heading directly up. While the skinning wasn’t horrible, I wouldn’t call it pleasant, as you had to weave through the various terrain features and relatively thick forest. 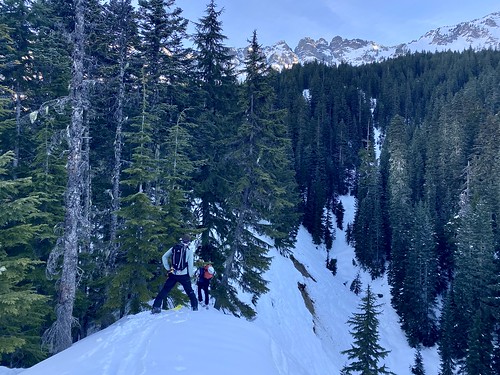 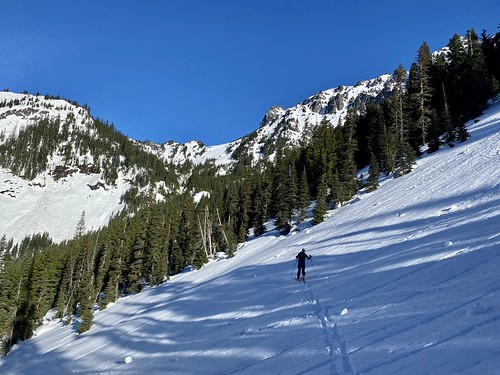 Open patch before heading up through thick trees
We broke out of the trees and were able to skin up Chikamin for a good spell before the snow started to get icy in the shade. I threw on the ski crampons for a while, and eventually we transitioned to boot crampons and booted up a steep and icy couloir. Luckily we would descend another couloir to the lookers right that wasn’t nearly as icy and narrow. 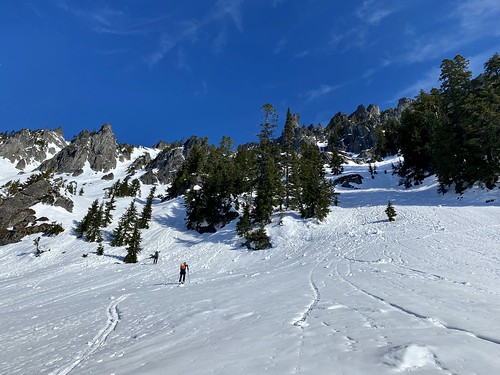 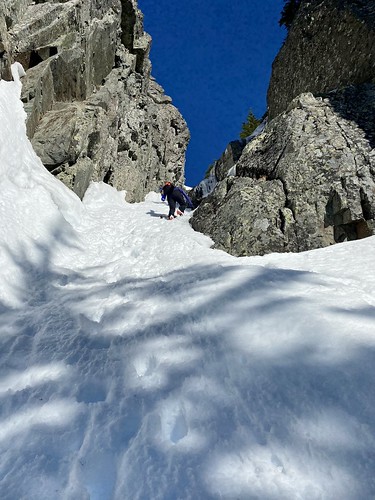 Booting up a couloir on Chikamin Peak
After a good amount of booting, we reached the ridge right below the Summit. All the lines coming down from the Summit looked a little too spicy to ski (at least to me…), so we dropped our skis and climbed up to the Summit, and enjoyed the sweeping views of the Central Cascades. It was close to 1pm at this point and I knew I would be regretting not checking the batteries on my headlamp… 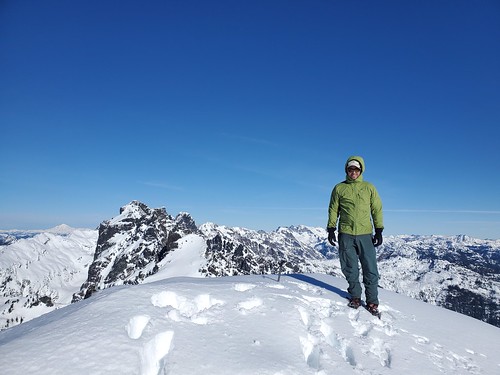 Me on the summit of Chikamin Peak

Skiing the upper section of Chikamin Peak
The ski down on the upper portion was nice. The snow was reasonably consistent and had softened up enough where you could grab a good edge. We navigated through a tight entrance to a couloir and then encountered some sloppy snow on our way down below that. At one point in the way down the lower section, Sylvia casually mentioned that she thought her binding was broken. It looked like the back piece of the binding had somehow oved back and wasn’t engaging with the slots on the heel of her boot. Oh boy, I thought, this is going to be a really long exit. Fortunately, we were able to use our ski poles to hammer the heel piece forward. Needless to say, Sylvia was cautiously skiing after that. 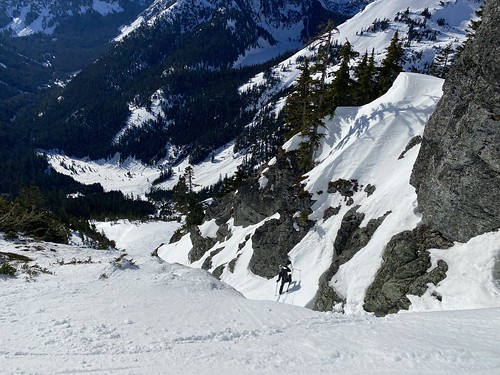 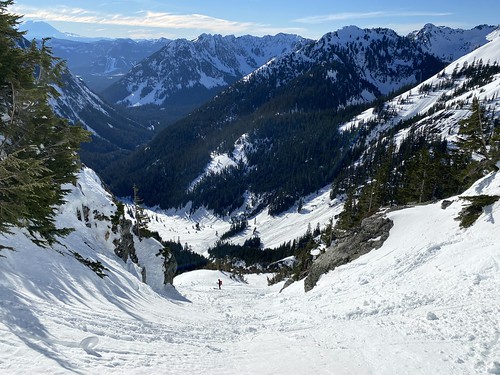 Sloppy snow on Chikamin Peak
As we progressed down the lower section of Chikamin, it became apparent we were not going to be able to follow the slide path down to the valley floor, as there was open water and rocks interspersed with the snow. We ventured back into the thick trees and picked our way down. We finally exited out of the trees and cruised through an open area. The sun had never hit it, and it was still frozen. As we came to a stop, we thought about trying to cross over Gold Creek to get on the Western Side, but there wasn’t a snow bridge in sight. We decided to head back towards our approach and follow that down through the valley, rather than risk trying to make a new trail and find unexpected issues.
It was slow going - we had to pick our way through the forest, and then eventually threw the skins back on to attain the small ridge and link up with our up track. Skiing in the trees was tough, with a mixture of frozen snow and thick sun affected snow depending on the aspect. On the exit we did benefit from the frozen snow in the valley - it allowed us to cruise on the flat parts and make good progress.
As day turned into night, we kept pushing through the valley. Eventually I knew I needed some sort of light, as it was hard to leverage the light from other people’s headlamps when you are navigating through a dark forest on frozen snow. Tim and Lucas gave me the batteries from their transceivers, and viola, I had light. But I didn’t do a good job securing the latch on my headlamp and proceeded to drop everything in the snow and couldn’t get it working again. My iPhone came to the rescue, I was able to use the flashlight and stick it in my baseball cap and use that on the exit!
It was close to a 13 hour day, and I really felt it that week. I think we probably would have been better going later in the season - likely would have been able to ski off the summit as well as take the slide paths down to the valley floor versus having to go through the trees. I don’t think I will be doing Chikamin as a day trip ever again, however a multi-day is another story as there are a bunch of things to ski up there :) My GPX file My photos on Flickr