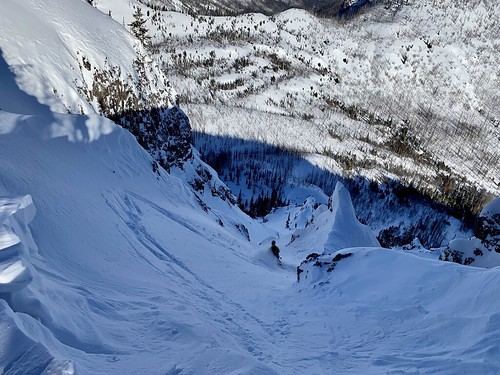 Length : 8 miles, roundtrip
Elevation Gain : 4600 ft.
The Lake Basin Chutes are 4 couloirs etched into the northeast side of a mountain due south of Basin Lake providing about 800 vertical feet of skiing. The chutes are accessible from Crystal Mountain Resort as a day trip. While the chutes are close together, you may find different snow conditions in each one, with the first chute typically seeing a lot of wind effect and low snow levels at the entrance. The chutes are steep at the top, averaging around 45 degrees, and some have fairly narrow entrances. However all the chutes moderate as you descend into the valley.

Follow the snowshoe trails into Bullion Basin, which can be accomplished by either T&T or Blue Bell Loop depending on where you park. From Bullion Basin, proceed up to Platinum Peak. Rip your skins and ski down into Cement Basin. Skins back on, head in a northerly direction towards the saddle, essentially following the Basin Lake summer trail. From the saddle, attain the ridge to the east, and choose one of the chutes to ski! For the exit, skin to Basin Lake and out via the saddle and then back to Platinum Peak.

You will park at Crystal Mountain Ski Resort, and you should check for the latest updates on on parking on Crystal's website, as there are typically restrictions and/or reservations required. For the 2023 season, parking reservations are required for weekends and holidays, and it costs $20 to park (parking is included for season passholders, although reservations are still required). Crystal is also offering a shuttle bus from Enumclaw, and from past experience, the bus is available even to folks not skiing at the resort.

Type : ski tour
Length : 9.8 miles, roundtrip
Elevation Gain : 5,860 ft.
High Point : 6,360 ft.
Download GPX View Track Only
Crystal was an obvious choice with the mountain passes being closed, and Tim suggested the Basin Lake Chutes, as they were higher elevation and North facing and hopefully still held decent snow after the mild weather moved in on Saturday. The approach looked straightforward, certainly easier than the drive, as every skier and boarder in the Puget Sound converged on Crystal and it took us a couple of hours to get there from Enumclaw.
After arriving at the base of Crystal much later than expected, we quickly threw on our gear and began the approach. It’s been close to 10 years since I was last around the Bullion Basin area, so Tim and Jeff lead the charge up the snowshoe trails. I forget the different trails we skinned up, but some combination of Mary Lee, Ted’s Trail and possibly Bullion Basin Trail. 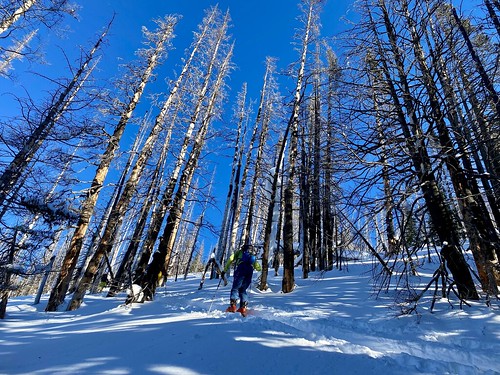 The start of the skin track through the burn area
Upon reaching Bullion Basin, we followed a skin track heading up Platinum Peak. There were a number of other groups going up the skin track and upon reaching the ridge, we encountered more folks getting ready to descend and could see numerous tracks down the slope ahead of us. Looking across Cement Basin, we didn’t see any tracks up towards where we would be heading, so we were hopeful to find some fresh lines. 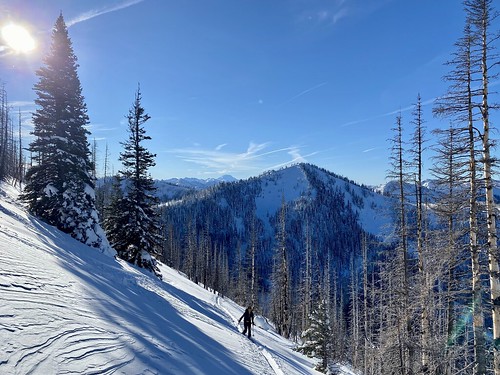 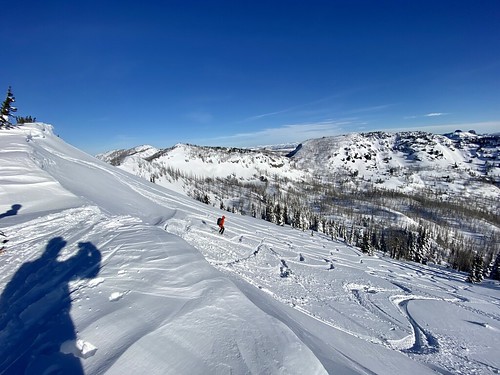 Heading down into Cement Basin
We skied down into Cement Basin and eventually the slope levelled out and we transitioned and started breaking trail. We spotted an existing skin track and used that - it looked like a group of two, possibly split boarders, and was fresh. It took us up to the notch and proceeded to parallel the ridge. We came to the first chute, and decided to keep moving along the skin track, as the entrance looked wind hammered and lacking any fresh snow. 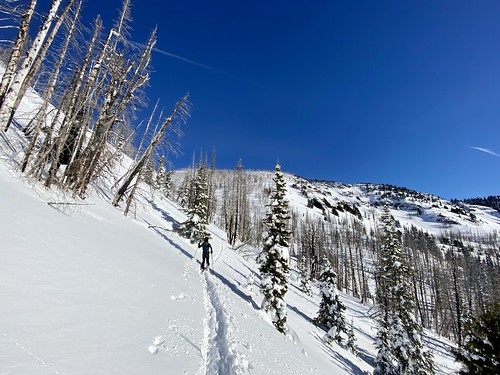 Tim breaking trail through Cement Basin
The second chute was untouched and looked more promising, and we decided to give it a go. Tim dropped in and made his way down, and Jeff followed. As Jeff was making a turn, one of his skis came off and careened down the couloir out of sight. After a quick discussion, I skied down past Jeff and eventually located his ski a couple hundreds yards down. The brakes had fortunately finally caught in the snow and stopped the ski. Jeff slowly picked his way down and grabbed his ski - I think this may have been the first single ski descent of this chute! 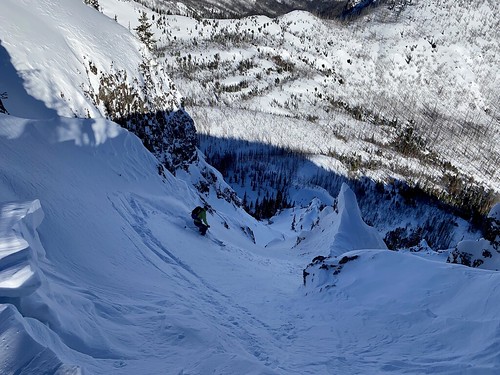 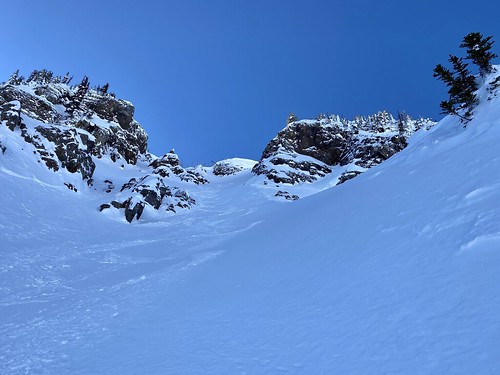 Turns down the upper part 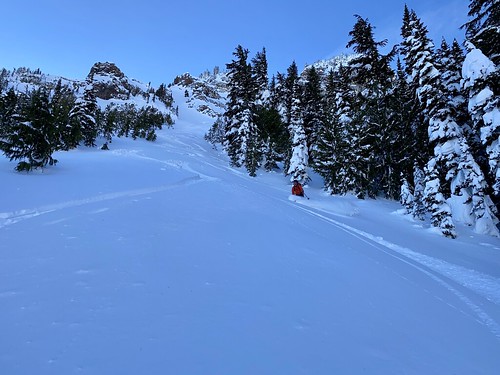 Jeff in the lower section after getting his ski back
Once we reached the trees, we threw the skins on and broke trail over to Basin Lake. We encountered a group of skiers at the bottom of their run, and we leverage their tracks to make an uptrack. Upon reaching the saddle, quickly confirmed another run was in order, and punched over to the existing skin track and made our way up. 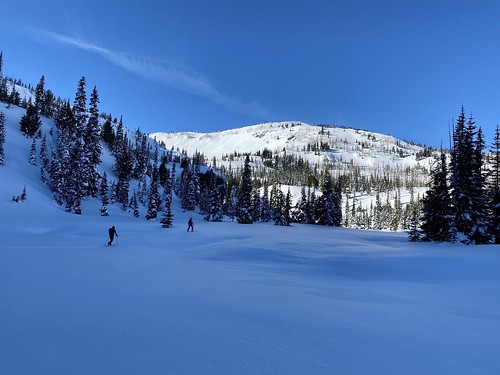 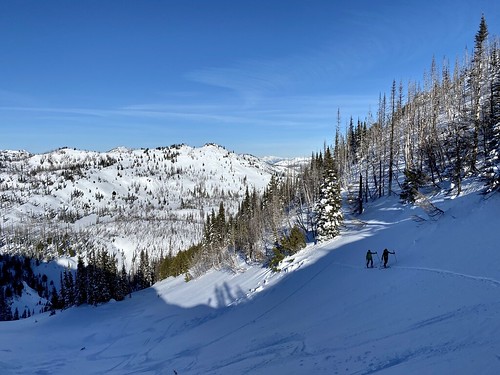 Skinning up to the saddle
We followed the existing skin track to the 3rd chute and took a look down - the chute looked narrow, but with decent snow (when we looked at it from below after our run, there only looked to be one small narrow part and the rest was fairly wide). We decided to take a gander at the 4th chute, and once there, we settled on skiing it. 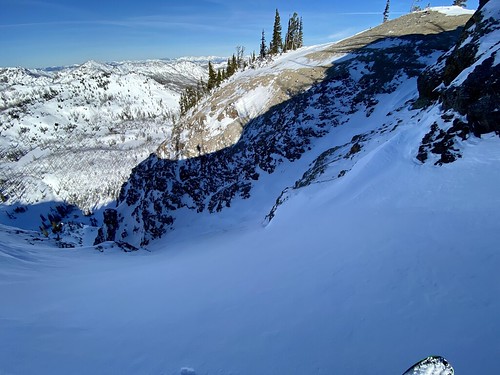 Entrance to the first chute, which we didn't ski 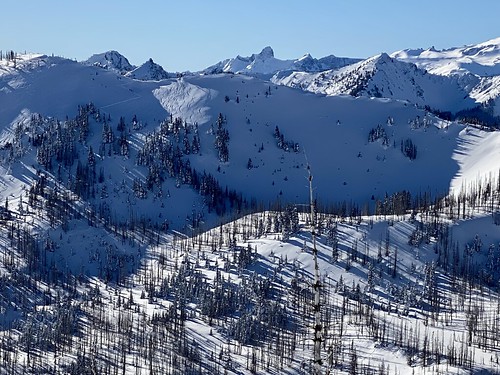 A look across Cement Basin at Platinum Peak
I did the honors of first tracks and quickly found the snow to be in good shape. After skiing the top part, I pulled over to snap some photos and vids of Tim and Jeff. Tim went by and kept skiing down and I heard/saw him run into some more difficult snow. Once I began descending, I encountered some variable snow - it seemed wind stiffened. Farther down the snow was better and we all enjoyed great turns down to the end of the run. 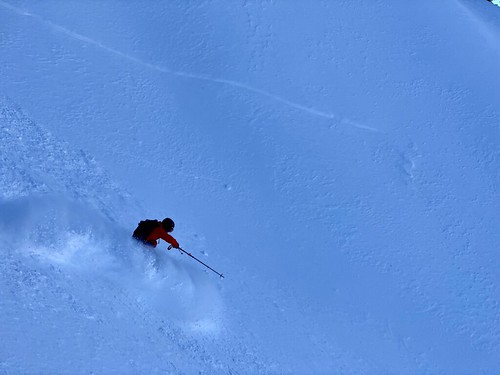 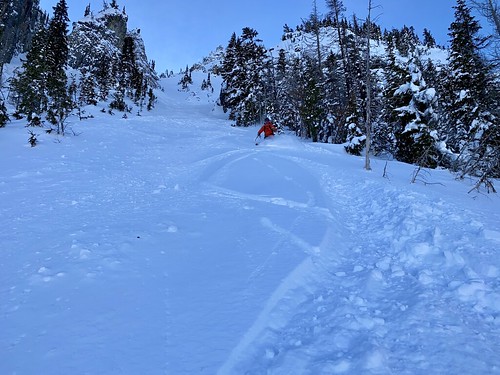 Jeff skiing the bottom of the 4th chute
Skins back on, we broke trail up to our skin track from the earlier ski, and then made our way to the saddle. We were all in agreement that it was time to head back to the car. If we hadn’t of arrived so late, we may have been able to squeeze in a 3rd run, but I was tired and content we got two runs on the Basin Lake Chutes. 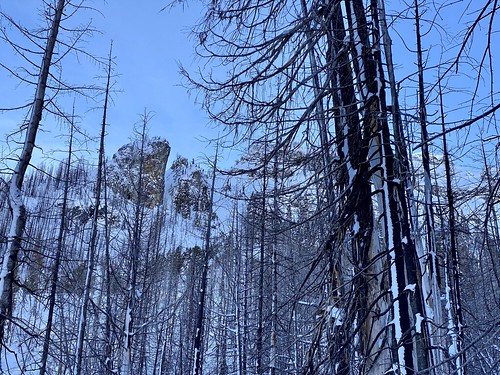 Obstructed view of the chute we just skied 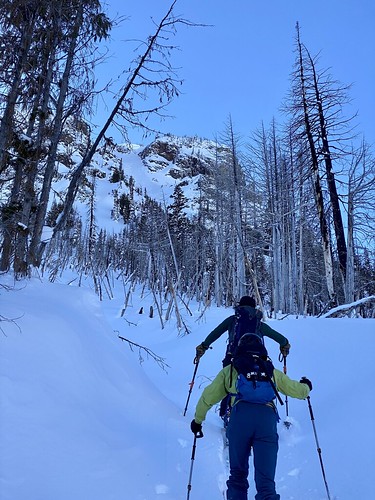 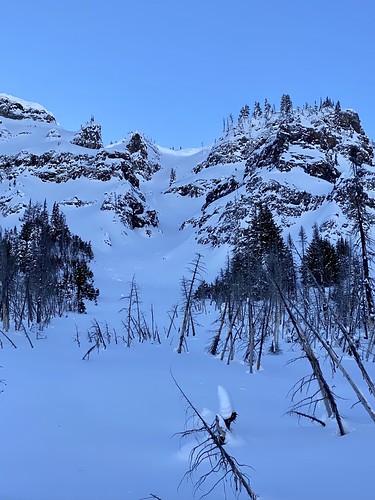 The 3rd chute, which we didn't ski
We made our way into Concrete Basin and encountered our first real sun effected snow of the day. The southern facing aspect had a lot of point releases. We were surprised there wasn’t more issues with the sun, as the forecast had called for 9,000ft freezing levels. We eventually found an existing skin track and made our way up to Platinum Peak and then skied down to the car. Surprisingly, the snow on Platinum Peak to the car wasn’t that bad. 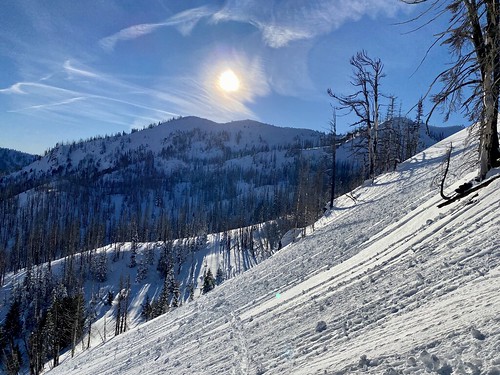 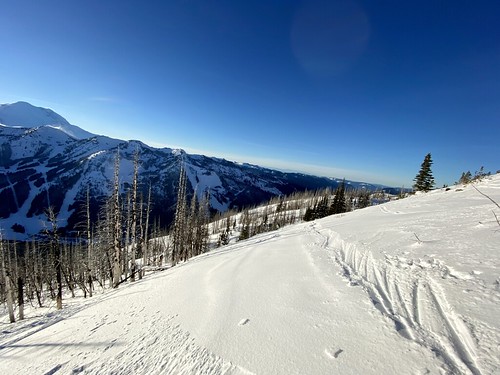 Final ski of the day
Outside of the incredibly long time to get to the base of Crystal, it was smooth sailing and a great day of skiing. The Basin Lake Chutes provide nice northern facing ski runs at relatively high elevations, and is certainly a place I expect to hit up again in the near future (maybe just on a weekday to avoid the traffic…). My GPX file My photos on Flickr