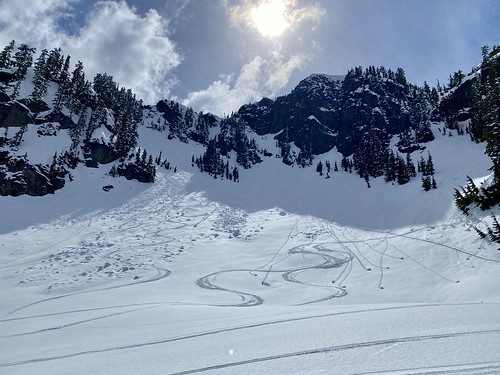 Length : 3.5 miles, roundtrip
Elevation Gain : 2,200 ft.
When ski area operations close at Alpental at the end of the season, there is still typically more than enough snow on the ground for a ski tour at Alpental. And you may be able to access Alpental before winter operations begin, although avalanche control work starts well before Alpental opens. A typical skin track follows the Armstrong chairlift up to Chair 2 (Edelweiss Chairlift), at which point you have the option of proceeding up Edelweiss Bowl or following Chair 2 up through Rollen trail to the top. Alpental sees a good amount of uphill traffic, so there is usually a skin track to follow, and then enjoy your favorite run down without all the other skiers.

Uphill travel is not allowed at Alpental during the operating year of the ski area, even when Alpental may be closed, like on Mondays or late season. The summit now requires an uphill travel pass as well. Please consult The Summit at Snoqualmie website for up to date information on accessing Alpental.

When Alpental is closed for the season, typically the only place to park is the main Alpental parking lot, as the upper lots are usually blocked by a gate in the road. Use the bridge to cross the South Fork of the Snoqualmie River to begin your tour. As always, pay attention to signage and as long as Alpental is open to uphill traffic, you shouldn’t have any issues parking there.

Type : ski tour
Length : 3.7 miles, roundtrip
Elevation Gain : 2,390 ft.
High Point : 5,470 ft.
Download GPX View Track Only
I saw the news that Alpental was opening for uphill traffic, and quickly found an afternoon where I could skip out of work a little early. My weekends were packed with other obligations, but it is easy to slip in a weekday tour up Alpental.
I arrived at the parking lot and did the quickest car to ski tour ready transition in the history of Alpental spring ski tours - I had drank way too much coffee during the day and nature was calling. A quick walk across the Alpental bridge and I was on the snow and skinning up out of sight from the various people milling around Alpental Lodge.
I continued up at a more modest pace, but was feeling very sluggish and quite hot, with sweat dripping down my face. I think my five minutes of sprinting up the mountain might have bonked me! I wasn’t liking the skin track, so I broke my own, and after ten minutes, decided I needed to take a break and eat some food. 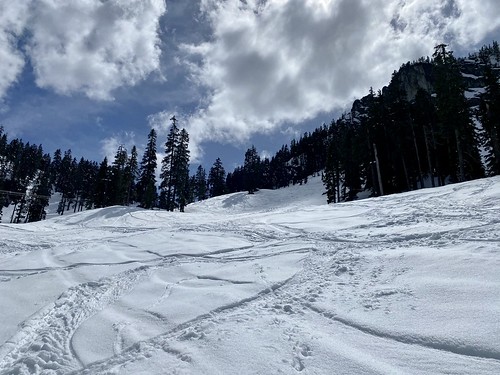 Mushy snow on the lower half of Alpental
I cut back over to the existing skin track and kept moving up the mountain, but moved at a snail's pace. Eventually I passed the top of Armstrong and was treated to a nice view of Lake Keechelus. As I reached Edelweiss Bowl, I saw a couple of skiers coming down. They were skiing well, but the mushy snow definitely looked a little grabby.

Turns in Edelweiss Bowl
Slowly but surely I made it up to the top of Chair Two. I think it took me around 1 hour and 45 minutes, which is by far the slowest I can remember ever doing it, especially considering it was Spring and there was a halfway decent skin track in. On the drive up, I had contemplated traversing across the top of Edelweiss Bowl and dropping down the backside towards Denny Creek. It was a fun line I had done a number of times during the year, but today certainly wasn’t going to be the day... 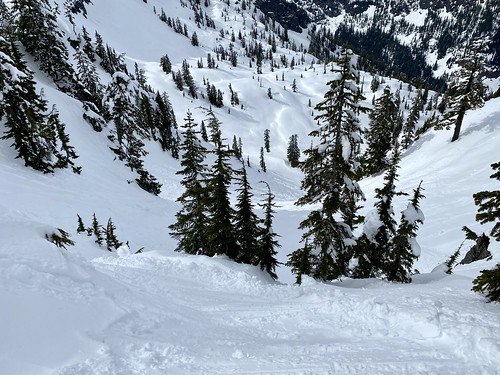 Looking down into Upper International
I transitioned to ski mode, and took the direct line into Upper International. The snow was mushy and my tired legs had a hard time consistently linking up turns. I cruised over the Adrenaline, and made my way down, taking a number of breaks. At this point, I was convinced I had Covid, as how else could I be this tired from just skinning up Alpental. 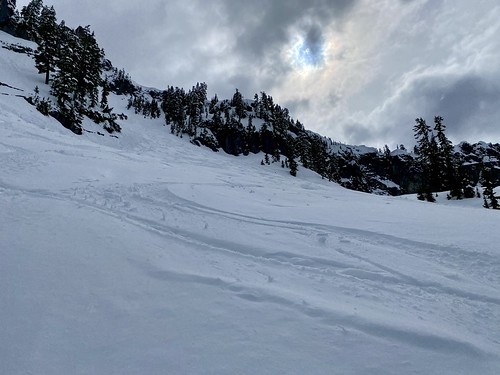 Turns down Upper International
I finally caught somewhat of a groove skiing Lower International, making some decent turns in the mushy snow, but again had to take a number of stops along the way to catch my breath and rest my legs. 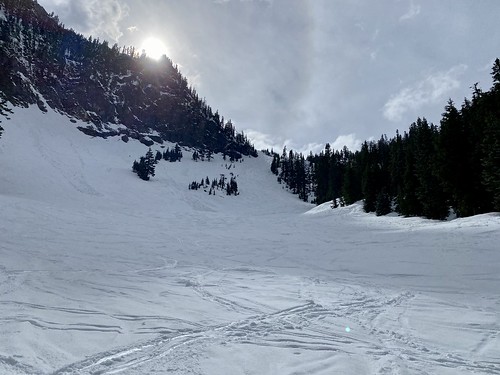 Lower I at Alpental 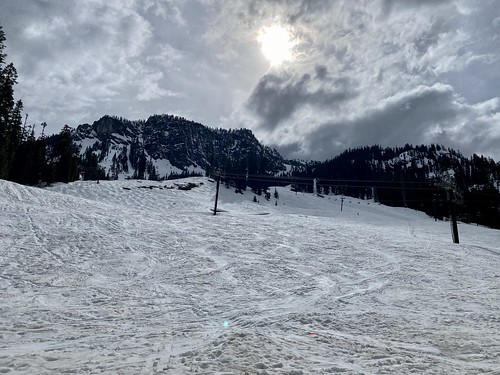 One last look at Alpental after my run
A very unsatisfying ski tour. I’m not sure why I was so exhausted, and after a good night's sleep, I felt fine the next day. At least I got out for one final mediocre ski tour for the season... My GPX file My photos on Flickr