We decided to spend Thanksgiving of 2021 in Kona, Hawaii. The decision to travel had been made nearly a year before - we needed something to look forward to, and were hopeful that Covid would not be an issue, or at least an issue we had learned to live with. For our first time on an airplane during Covid times, we wanted somewhere to go that we had never been before, that was easy to get to, and tropical to escape the dreary Seattle weather that accompanies fall. Kona it was...

Having visited Maui a couple of times, and Ohua and Kaaui once, it’s hard to pick a favorite, as each is unique and offers incredible vacations, but we really liked the Big Island, and Kona in particular. While it doesn’t have as many beaches as Maui, there were certainly some nice ones, and it was cool seeing the lava rock everywhere. Hawaii Volcanoes National Park was great, and the town of Kailua-Kona was fun. It’s definitely a place I will return to in the future.

Travel restrictions were relatively straightforward - My wife and I were both vaccinated and simply had to upload our vaccination card and fill out a health attestation form in order to enter the state of Hawaii. However, vaccines weren’t yet approved for the age of my son, and he had to do a PCR test within 36 hours of arriving in Hawaii. It was a little difficult finding a testing location with availability that also met the requirements for the state of Hawaii.

We were meeting my parents for a good portion of the trip, and ultimately decided to rent a house through Vrbo (a house rental platform like AirBnB). I had points through Marriott and had looked at the various Marriott hotels on the Big Island, but none offered a kitchen. With a younger child, I have come to really appreciate staying in a location with a kitchen, regardless of whether it’s a house, apartment or hotel room equipped with a mini-kitchen. Nothing like waking up at 4am with everyone hungry on your first morning and having no dining options! 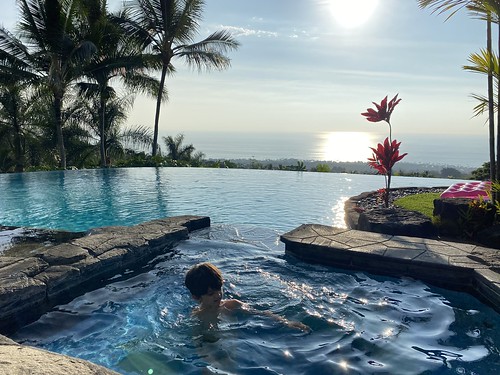 Hot tub and infinity pool at our rental house

We found a place up the hill from Kona proper that provided amazing views and a heated infinity pool. The property was beautiful, with a large lawn area where we played soccer and threw the football. The pool area and view were so nice, we rarely ventured to the beach...

Prior to my parents arriving, we stayed in a tiny house on a coffee plantation. It was my first time staying in a tiny house, and while we enjoyed it for the couple of nights there, I can certainly say that I am not cut out for long-term living in a tiny house - at least not one where I have to climb down a ladder to go to the bathroom at night!

As might be expected during a pandemic (and given we had a house with a kitchen), we didn’t eat out very frequently on this trip. But we certainly enjoyed the restaurants and bars we did visit. 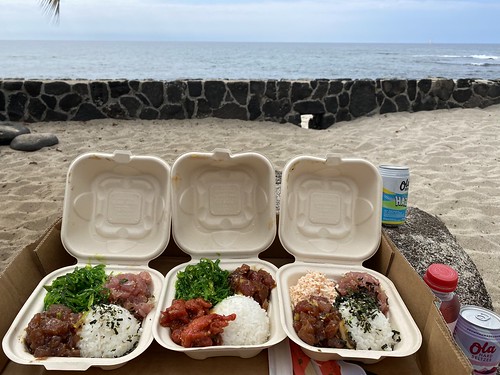 Da Poke Shack take-out lunch
Grabbed Poke to-go and everyone was very happy with the meal. They have a picnic table or two outside (no inside seating), but there were people already there and my son needed to use the bathroom, so we took our Poke take-out to Honl’s beach and had lunch while watching the waves crash against the shore. 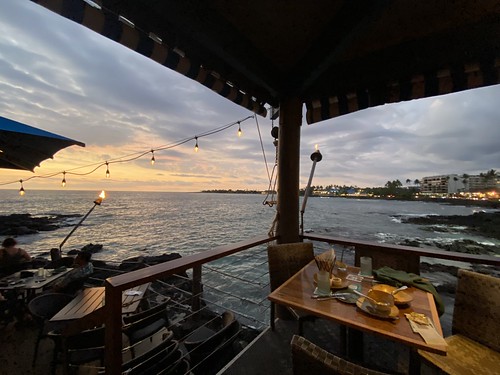 Ocean view at Huggo's
While my parents watched our son, my wife and I headed down to Kahakai Road. We didn’t have a reservation, and although it was reasonably early (around 5pm) places were packed. My wife stopped in Huggo’s while I looked for parking and put our name in - about a 45 minute wait. We grabbed a drink at Foster’s Kitchen and less than 30 minutes later our table was ready. We had a great experience, and really enjoyed the Ahi Tuna Poke Tower. Only complaint was the sizzling shrimp - there was nothing wrong per se, it just didn’t hit the spot and felt like something I would and do easily whip up at home.

My wife and I had some time to kill while waiting for our table at Huggo’s, so we decided to grab a drink at Foster’s Kitchen. It had a cool vibe, the drinks were good and we probably would have canceled our reservation at Huggo’s and stayed for dinner if we could have gotten a table.

After dinner at Huggo’s, grabbed a beer at A-Bays. They had a good beer selection from various Micro-breweries throughout the Hawaiian Islands.

We were looking for a place that had a decent wine menu and fresh fish, and this place caught my eye. It’s not in the heart of Kailua-Kona, but is easy enough to get to/find. I had a butter fish, which was excellent, and the rest of the family enjoyed their meals. 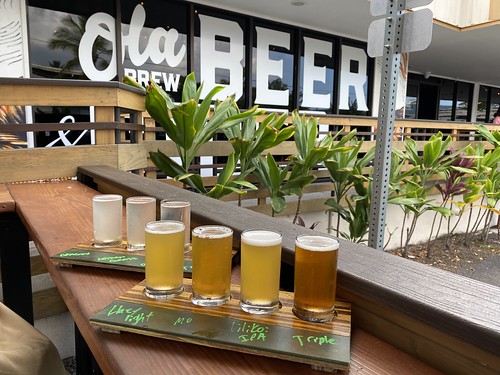 Tasty beer and hard seltzer at Ola Brewing
My wife and I stopped by Ola Brewing to sample their beer (me) and seltzer (her) after running errands in town. Ample seating indoors and outside, and I enjoyed the beer. Good mix of styles of beer, and my wife enjoyed the seltzers.

There are a lot of different options for activities around the Big Island. We opted to go on a number of short hikes, visit a couple of beaches and spend a day going to the Volcanoes National Park. A lot more time was spent on the activity of sitting by the pool and relaxing…

You can view my trip reports (photos, gpx track, and info) about the various hikes we did below. All besides the Volcanoes National Park were in close proximity to Kona.

I promised my son we would see some sea turtles, or at least I promised him we would try our best, and we succeeded. We didn’t go to the beach nearly as often as I have when visiting other islands in Hawaii. That is primarily because we had an amazing pool at our house, and everyone seemed content to get their water time in the pool versus the beach. I brought snorkeling gear, but only went once as my 6 year old son was not enjoying it (I need to get better snorkel set up for him that is easier to get on).

On our first day in Kona, we went down to Kahalu’u Beach in the mid-morning to snorkel and hopefully see Sea Turtles. While the snorkeling was great, with lots of fish in the water, there were no sea turtles to be found. When you first enter the water at this beach, it’s a little chilly, but it warms up as you go father out - there appears to be fresh water running into the ocean at the beach which cools it down?

There was a volunteer at the beach answering questions and giving out advice, and I heard her say there would likely be sea turtles in the afternoon - not sure if that was due to the tides, or they just come in the afternoon. 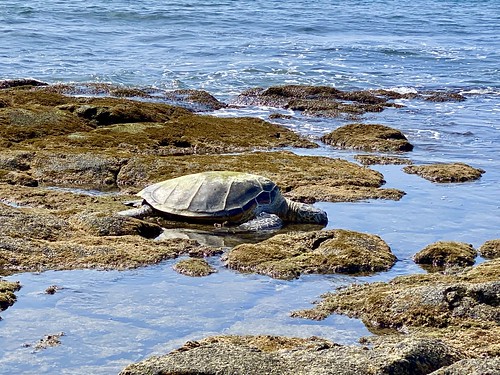 Sea Turtle resting on the rocks
I went to Honokohau Beach (it’s within the Park) on two separate occasions, with my wife and son on the second day, and then again with my parents once they arrived. Both times we saw sea turtles. They were nestled among the rocks, both basking in the sun and swimming in the water in the rocks. It would be easy to walk by them if you didn’t know they were there, but if you keep an eye out, you will spot them.

We quickly stopped by Mahai'ula beach after one of our hikes to dip our toes in the water While the beach is great, with lots of sand, not sure it’s worth the drive - it’s a long and rough road - but it’s unlikely to be overcrowded at least. 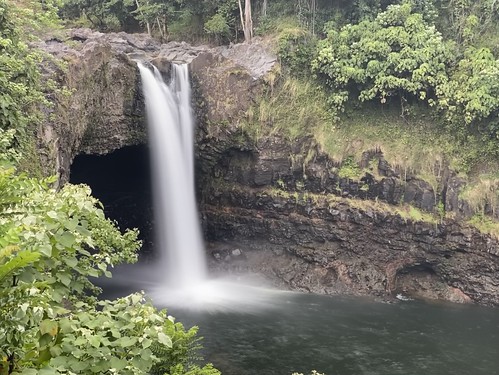 Rainbow Falls outside of Hilo
We only made it to one waterfall, Rainbow Falls, outside of Hilo on our way back from Hawaii Volcanoes National Park. It was packed with people, and we were not able to find parking, but it’s worth visiting if you are in the Hilo area. We ended up having everyone besides the driver jump out and quickly go see the falls while waiting in line for a parking spot in the parking lot.

We had a great time in the park. If doing it again, I would seriously consider spending the night at the Volcano House, allowing for more time to explore the park and see Kileau in the dark. I have talked with a couple of people that mentioned staying in Hilo for a couple of nights to be closer to the park. And while Hilo is certainly closer than Kona, I don’t think I would bother.